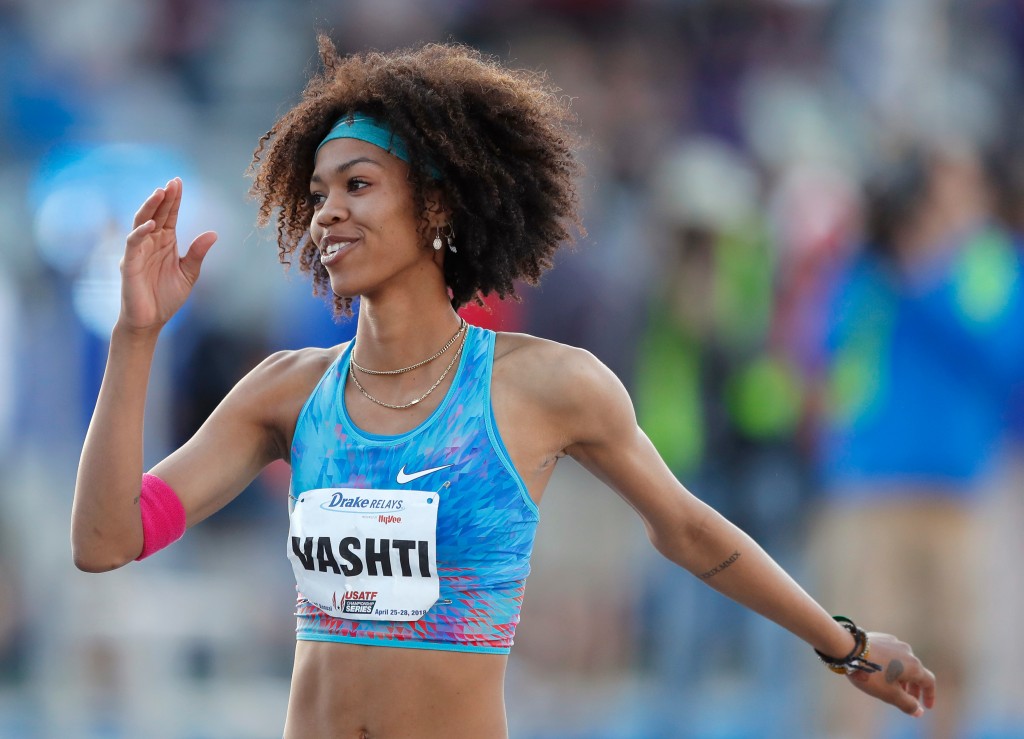 Simpson shattered the American mark in the somewhat obscure event by finishing in 9 minutes, 16.78 seconds. The record had been set in 2014 by Shannon Rowbury at 9:20.25.

Simpson's time was the eighth fastest ever recorded in the two-mile, a race she teamed up with meet director Blake Bolden to bring to Drake in an effort to give fans a marquee race on Friday, since most of Drake's elite events scheduled for Saturday.

With a near-packed house cheering her on, Simpson clinched the mark with a final lap of 63.1 seconds.

Simpson, who was born in Webster City, improved to 11-0 in Drake Relays events.

"The record was hard. It was really windy, and I was out there on my own. I talked to my coach about how I was really putting myself in a vulnerable position by going out hard and being alone with all the wind. But I really wanted to do it for the fans, even though the conditions weren't perfect," Simpson said.

American Sam Kendricks set a meet record in the pole vault, posting a 19-1.5 on a warm and windy night at Drake Stadium.

Cunningham, 20, finished with the second-best jump in the world so far in 2018, though that comes with the caveat that it's still very early in the outdoor season. Still, Cunningham will likely be favored to win again at Drake in June when the USA Outdoor meet comes to Des Moines. "I think I'm where I want to be," Cunningham said. "I feel like my progression from indoor to outdoor is going fine."

Inika McPherson finished second to Cunningham while dressed as a Power Ranger from the "Mighty Morphin Power Rangers" T.V. series. McPherson acknowledged that the mask made it tough to breathe and see the bar, but she still cleared 6-3.25. "This is what I tell kids. I was like 'Hey. You can't be the same person you are at home when you're like being (very) cool. You've got to be your alter ego." McPherson said.

Kendricks, the bronze medalist at the Rio Olympics, missed just once in seven vaults in cruising to his win. South Dakota's Chris Nilsen was second followed by Scott Houston, this year's U.S. indoor champion. "At least it was sunny and blustery. It really helped the guys get down the runway because we had a massive wind at our backs," Kendricks said. "Sometimes I have to go abroad to find that super high-level competition. I don't have to go far at all. I'm still in my own time zone and I'm really thankful for it."

Ninety-six-year-old Cincinnati native Mike Fremont won over the crowd when he competed in the men's masters 800 earlier Friday. Fremont was lapped by the other 31 runners in the field twice but he persisted, finishing in 6:46.68. Eric Potter won the event in 2:01.89.