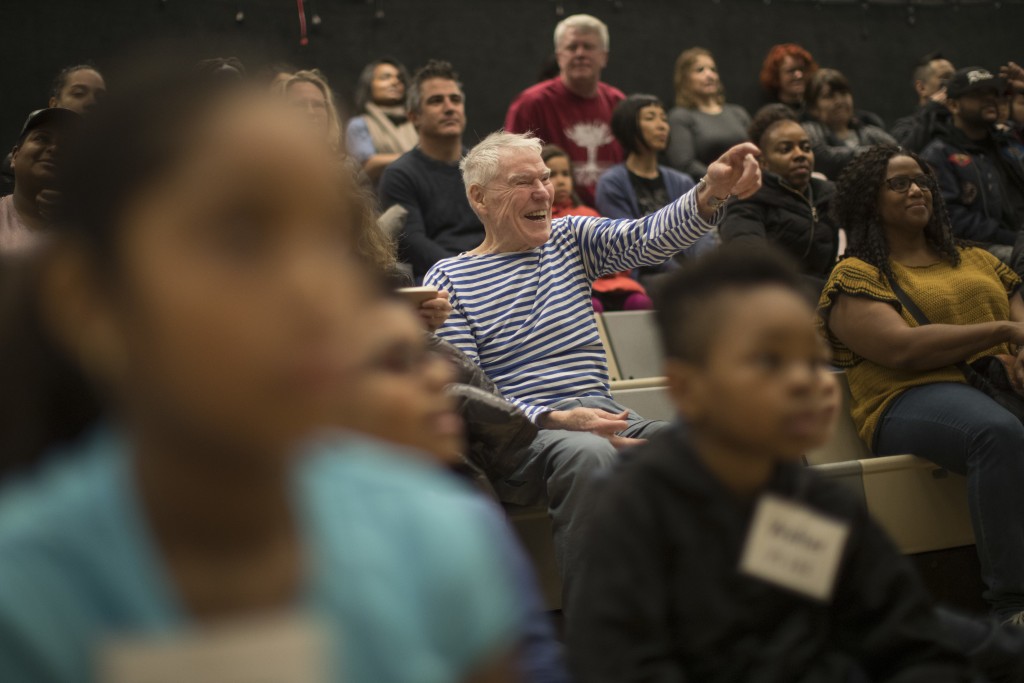 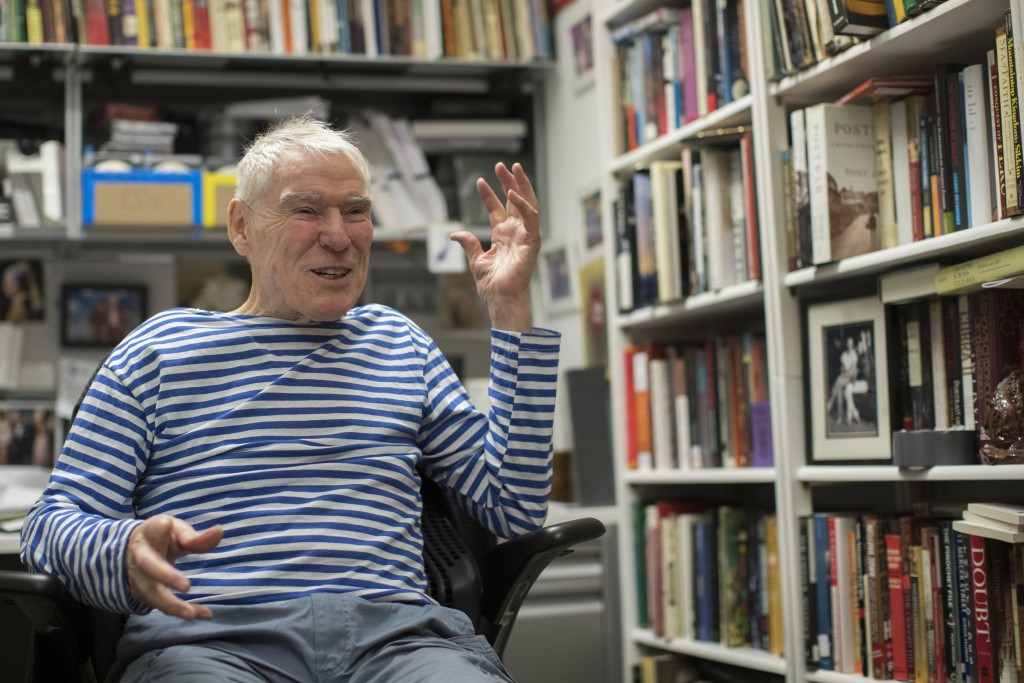 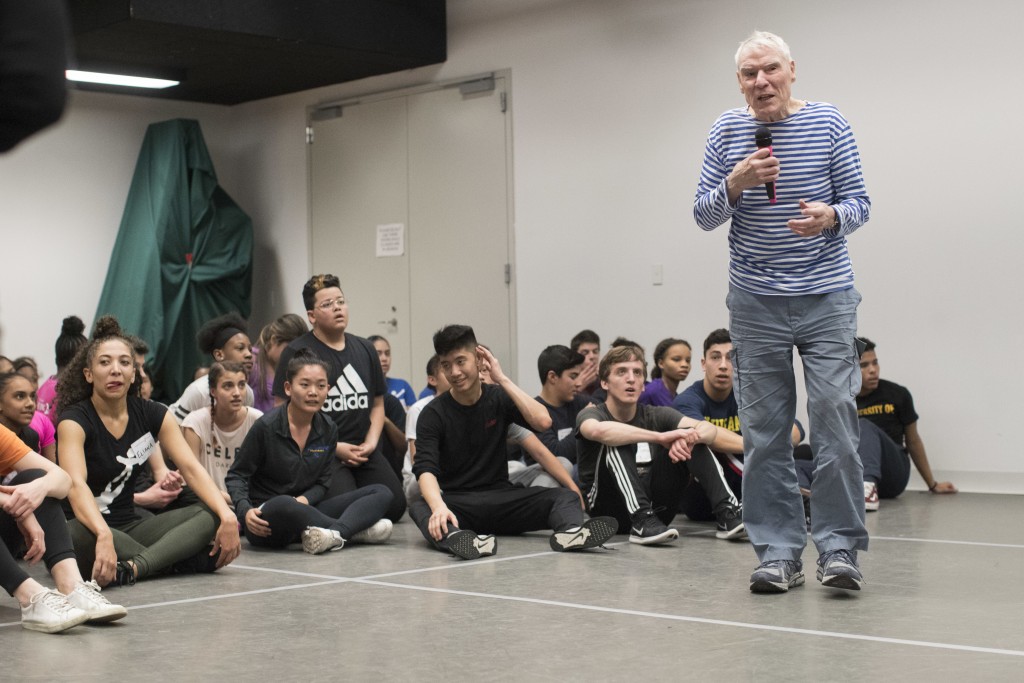 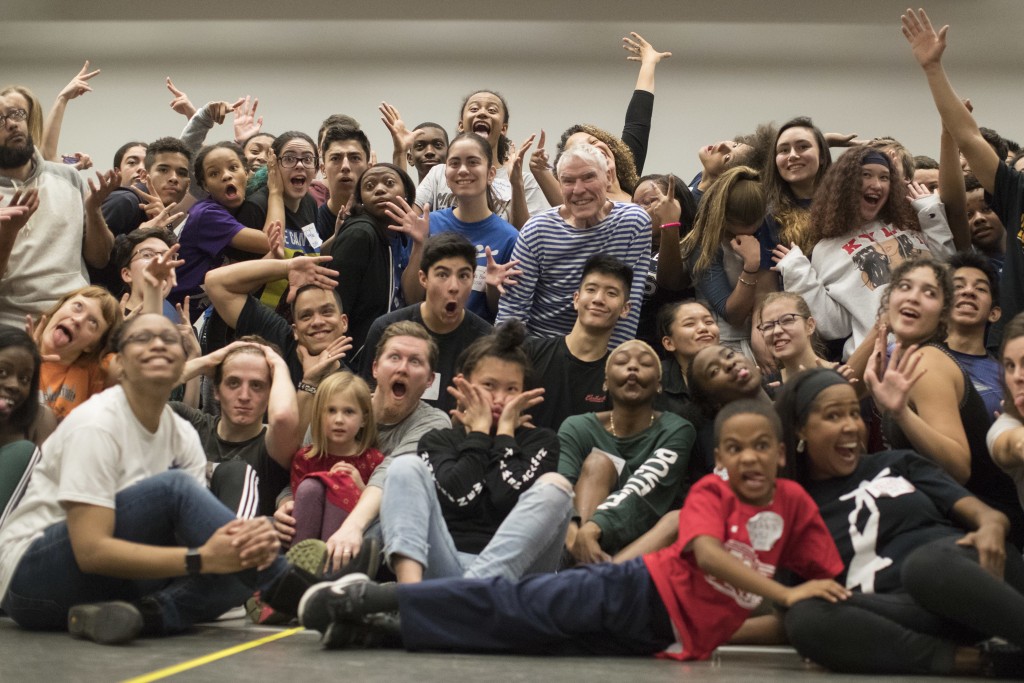 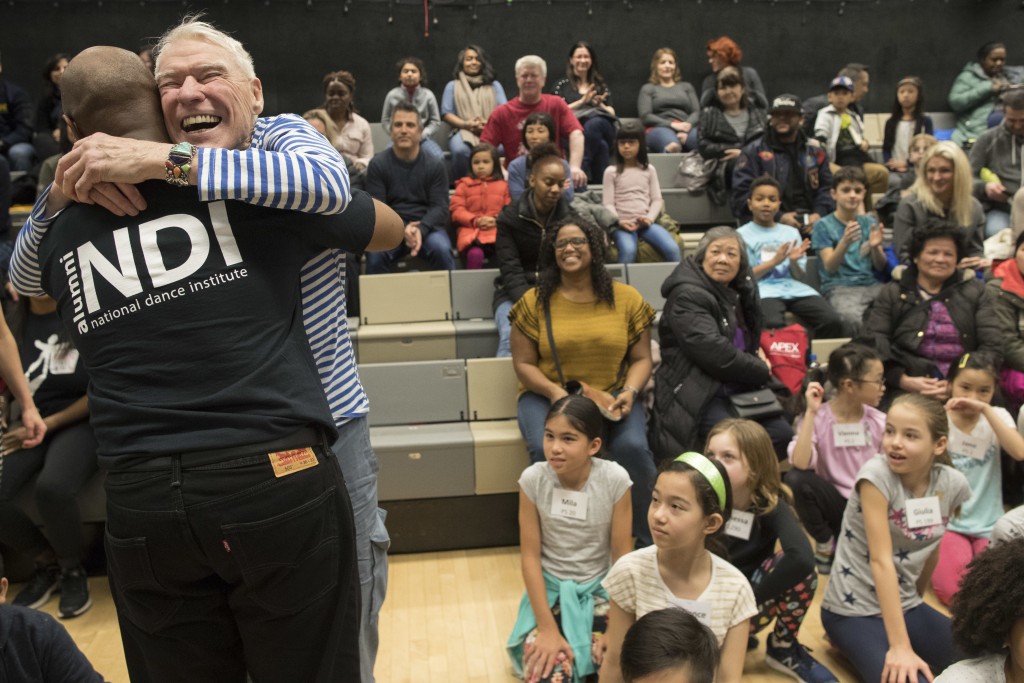 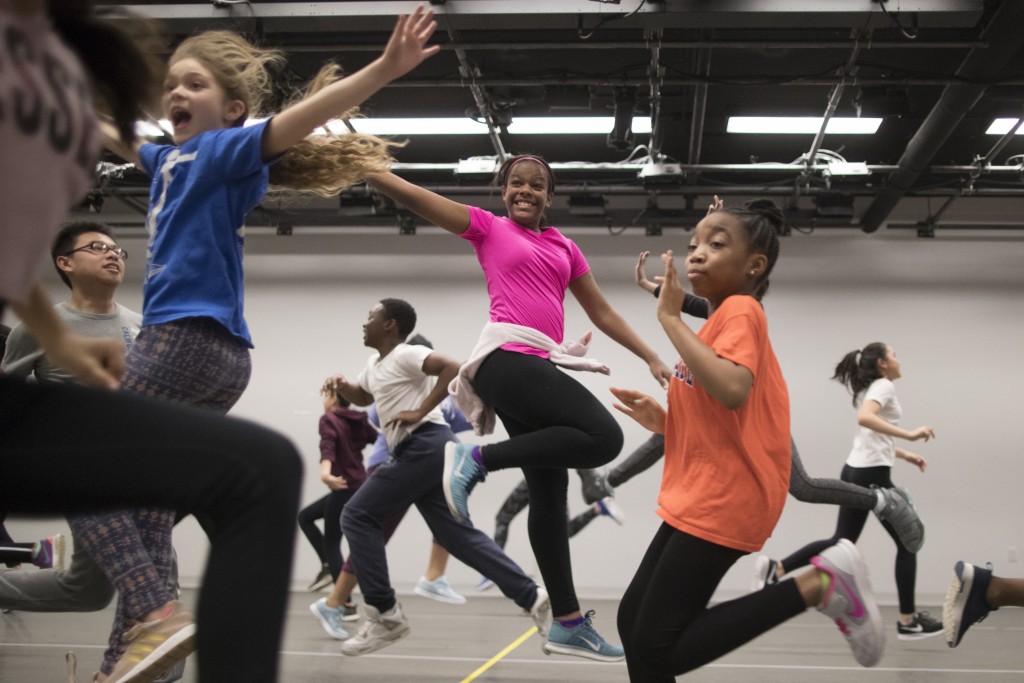 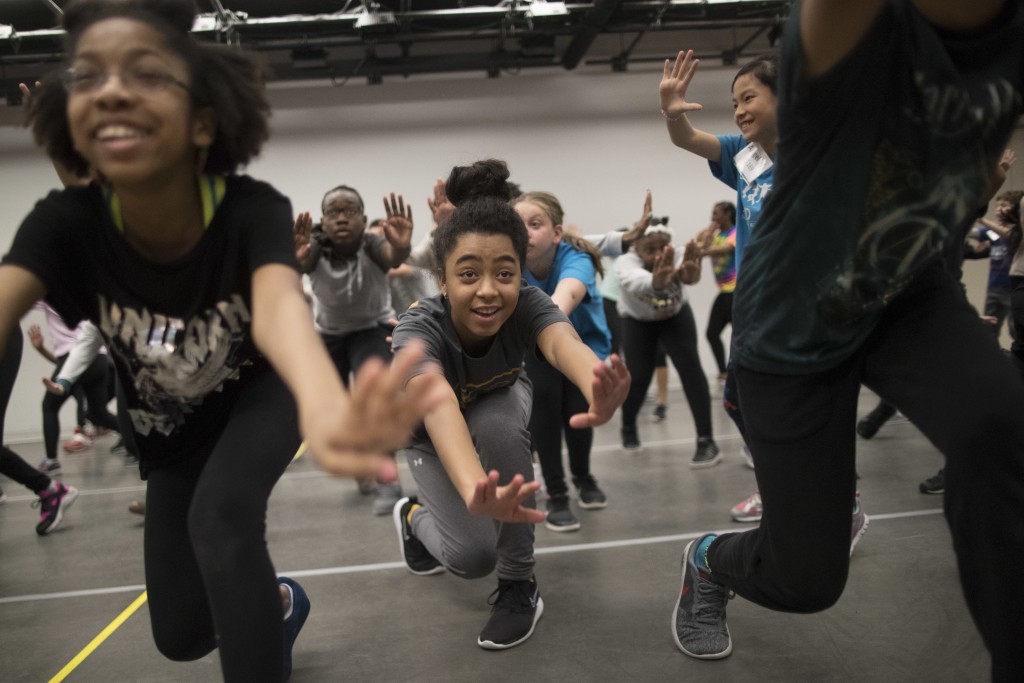 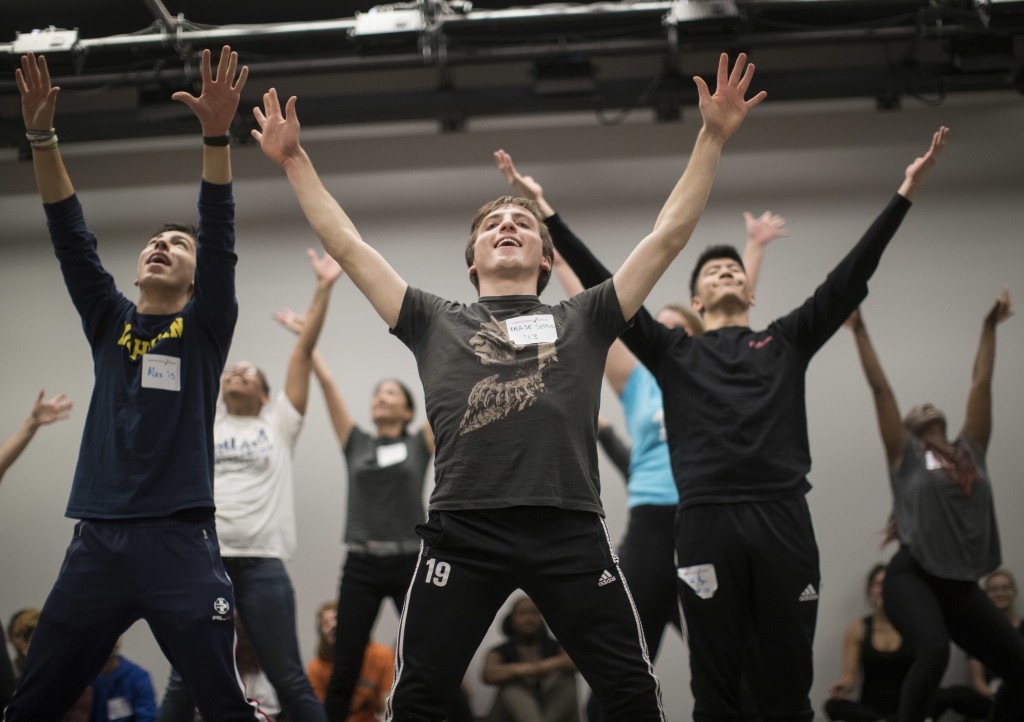 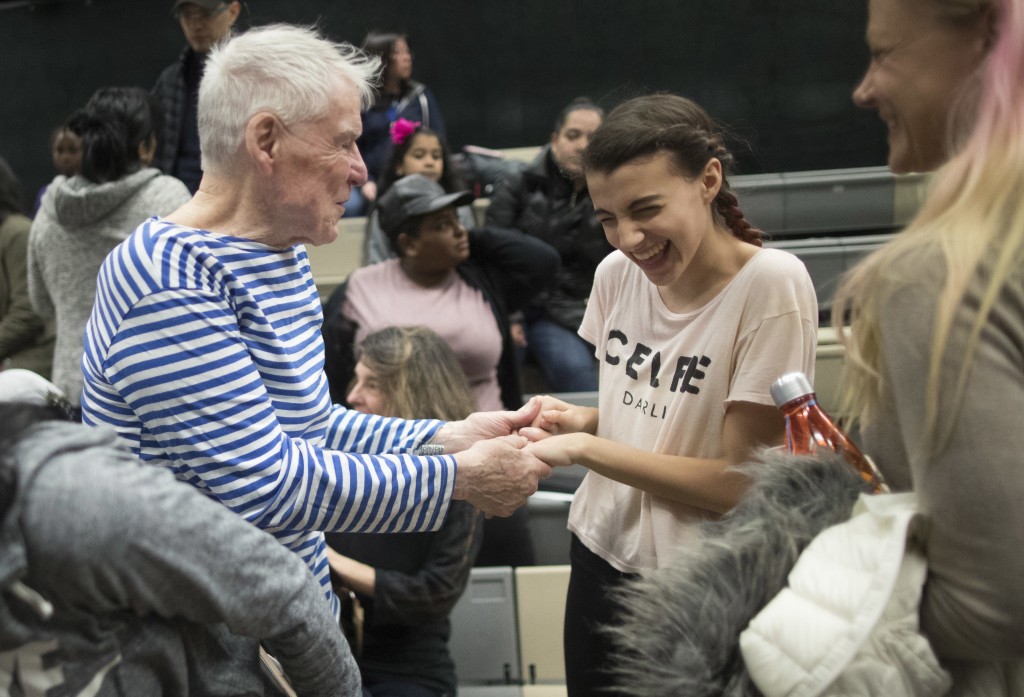 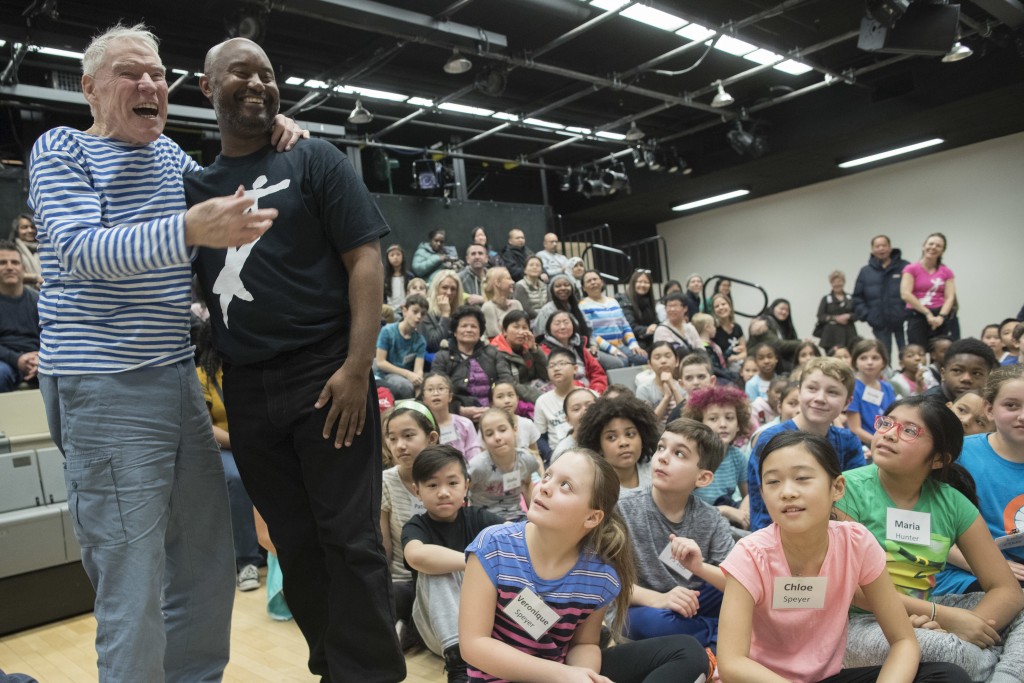 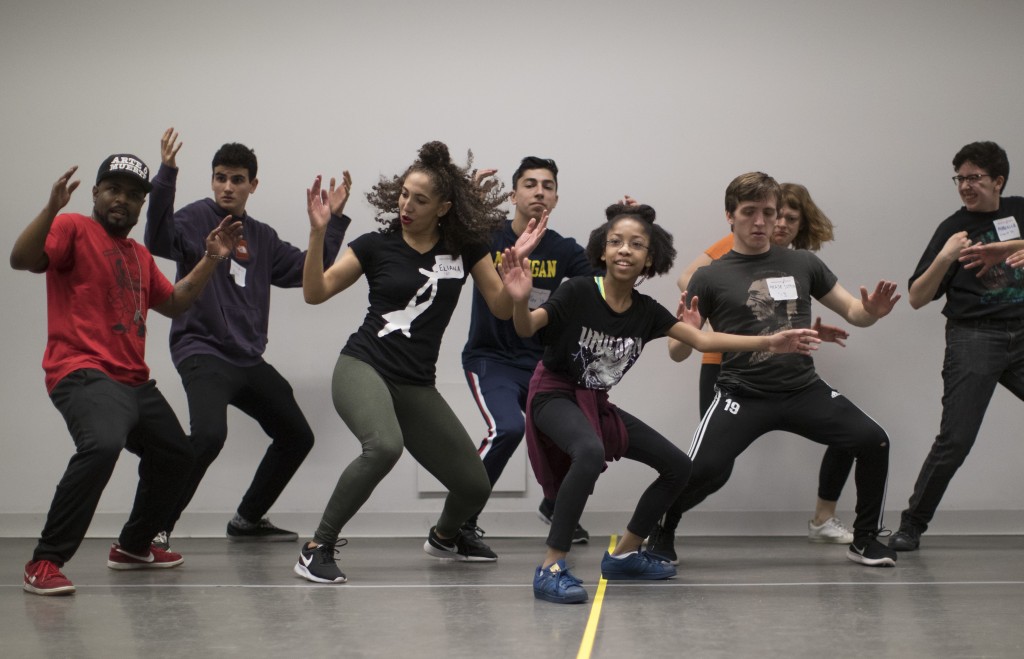 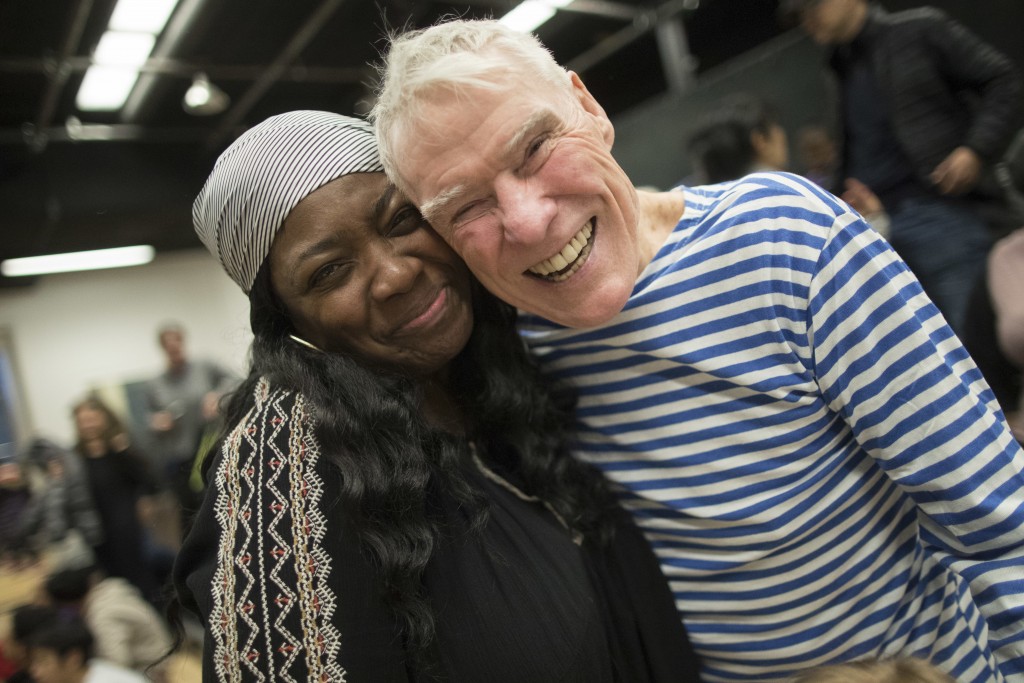 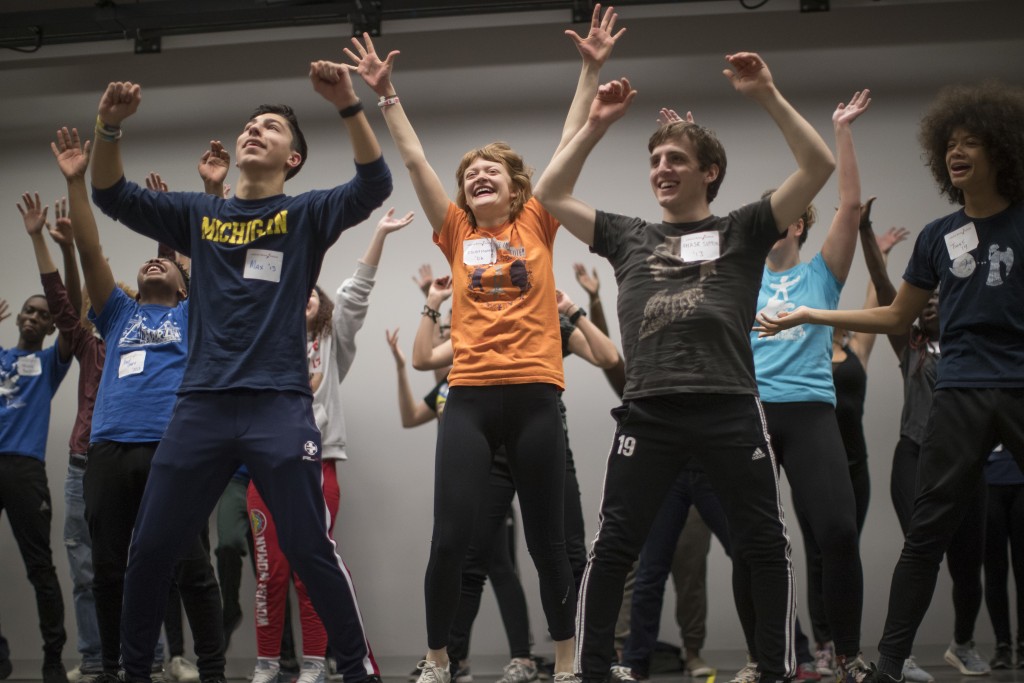 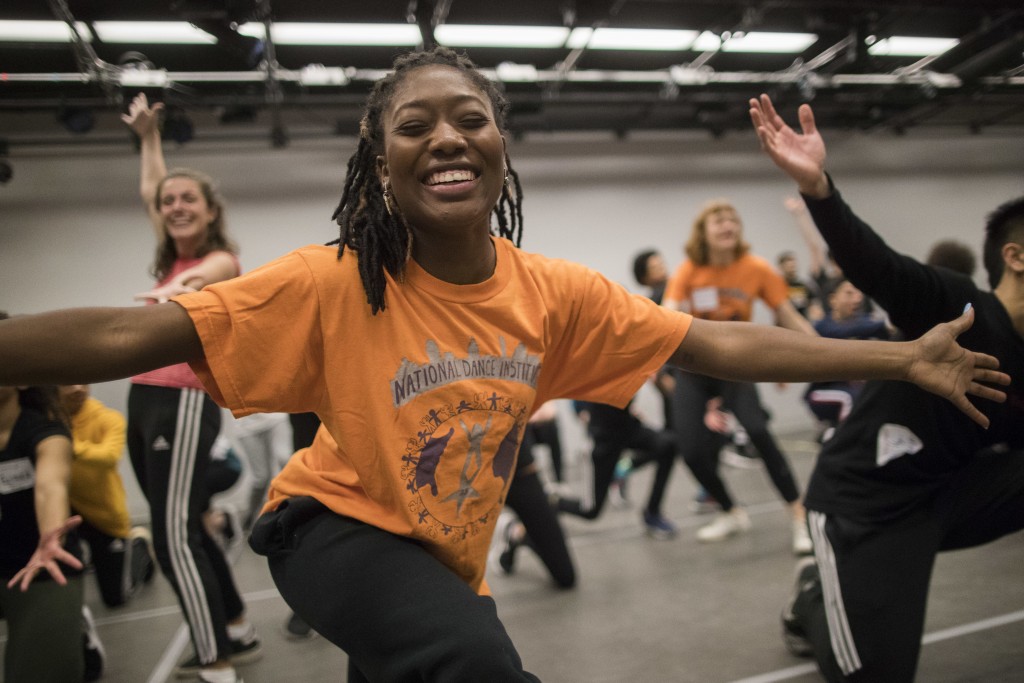 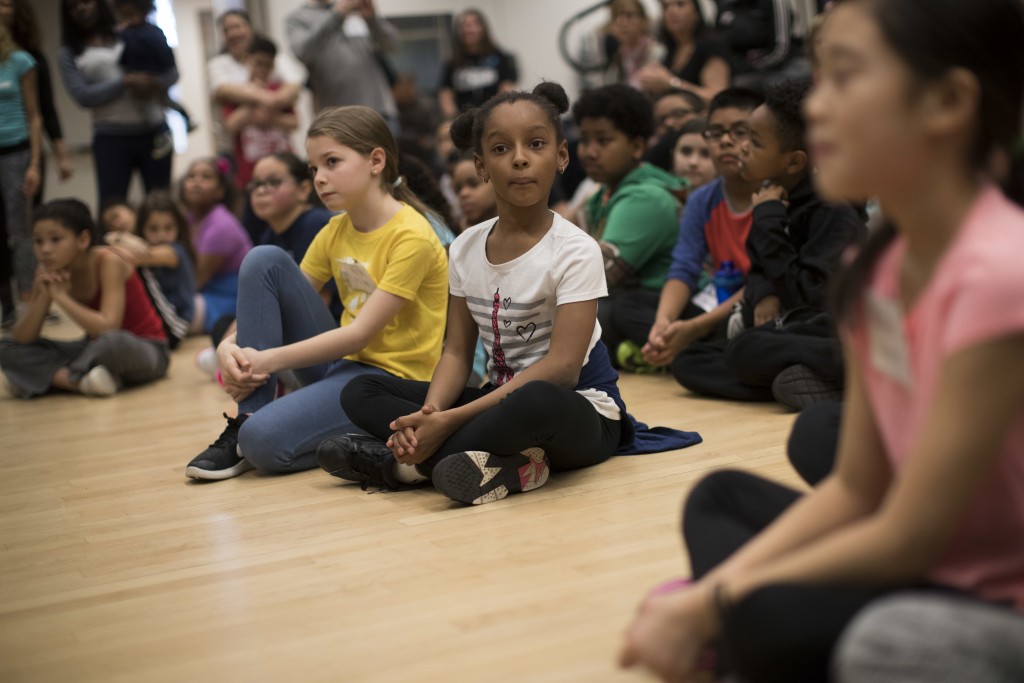 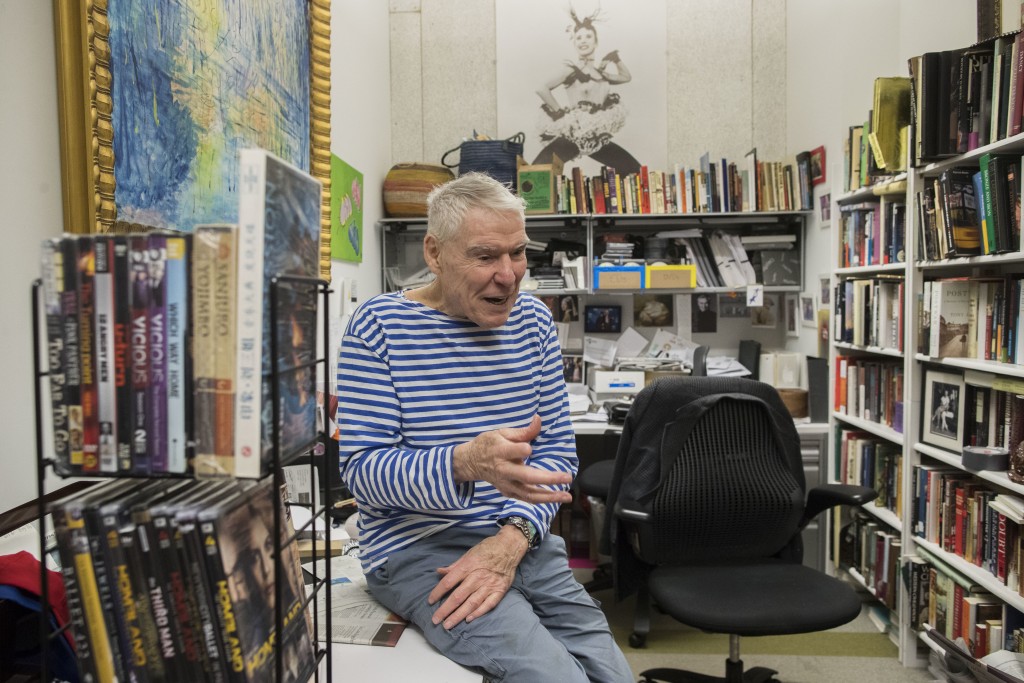 NEW YORK (AP) — On a recent weekend morning, a cavernous basement studio in Harlem was chock full, throbbing with music, and hopping with energy — literally. It was alumni day at the National Dance Institute, and young dancers — 9 years old, through the teens and up —were getting ready for a joyous, jazzy reunion of their favorite numbers.

But they couldn't really get going until one man took his seat: the institute's founder and guiding spirit, Jacques d'Amboise, 83, who grew up on the streets of upper Manhattan to become one of the most famous ballet dancers in the world. He'd been busy upstairs, proudly showing a visitor everything from the art collection on the walls to photography by his late wife to frayed, handwritten diaries from his youth. "Jacques, we need to get moving," he'd been gently urged. "OK, one more thing!" he kept saying.

Finally, d'Amboise, who sports a bright shock of white hair and a constant grin, took a seat, and the dancing began. "Wow!" he shouted every few minutes, calling out praise. "Fantastic!" he yelled. "Isn't this amazing?" he exclaimed, to anyone in his earshot.

It was a particularly happy day at NDI, which d'Amboise founded in 1976 while still a principal dancer with New York City Ballet, where he'd been plucked for stardom by the legendary George Balanchine. For four decades, the institute has been providing free dance classes to thousands of city youngsters, from 9 to 14, both in schools and, for the most devoted ones, in free Saturday classes. It was those latter students who'd returned to reminisce, and of course to dance — most of them guided only by muscle memory.

And d'Amboise was greeting all of them, dispensing hugs and smiles.

"He knows pretty much everyone by name," says Max Brill, 19, a freshman at the University of Michigan who was back for the reunion. As a youngster taking classes at NDI, he was thrilled when d'Amboise chose him to dance a lead role in a piece he was choreographing about a father and son. "I was incredibly humbled, being able to work with him one on one like that," Brill says.

Even now, d'Amboise still comes to the Harlem building each day — that is, when he's not traveling the country, visiting one of the 13 affiliate dance institutes (there's also an exchange program in China) and working on fundraising. "Yes, he's here every single day," confirms Ellen Weinstein, NDI's longtime artistic director, who met d'Amboise some 30 years ago as a student at SUNY Purchase, where d'Amboise was teaching "for a minute" (academics did not suit him). "And four to five times a day I get a call, 'Ellen how about this?' It's always something exciting, always fabulous!" she laughs, mimicking her mentor's enthusiasm.

That same enthusiasm was a hallmark of d'Amboise's virtuoso dancing at City Ballet, where he performed for some 35 years before retiring, just before turning 50, in the early '80s. Hollywood also came calling — he famously appeared in "Seven Brides for Seven Brothers" and "Carousel" — but he chose to focus on ballet, in famous works like Balanchine's classic "Apollo" and the Gershwin-scored "Who Cares?" Next week, at NDI's 42nd annual fundraising gala, a scuffed-up pair of purple dance shoes he wore in "Who Cares?" will be auctioned off.

And that same energy — and huge grin — was on full display in the Oscar-winning 1986 documentary "He Makes Me Feel Like Dancin,'" a look at d'Amboise's work with NDI students.

Sitting recently in his small office, d'Amboise described the moment he finally decided to end his dance career.

"I was almost 50, there were only a few roles left that I could do," he said. "I was waiting to go onstage, and I suddenly thought, 'I don't want to go on. I danced, came off, took off my ballet shoes and quit."

Many dancers struggle to figure out their "Act 2." Luckily, d'Amboise had founded NDI several years earlier, an effort to spread his love of dance to youths who might not otherwise have ever tried it — students like he'd once been, growing up on the streets of Washington Heights. NDI now teaches 6,500 students a year in city schools.

So enamored is d'Amboise still with the power of dance that he can't help but demonstrate it while engaged in everyday conversation — for example, suddenly taking a visitor's arm and showing them how to move it to express a thought or feeling.

"I never asked myself this until my late 20s," he says, "but what IS dance? I realized that it's an art form our species has developed to express emotion. And it's extremely subtle. Wanna see an example?"

Though d'Amboise continues to choreograph at the institute, his most valuable role is as mentor to other choreographers, Weinstein says.

"He can walk in and see a piece and with one little tweak, change the whole nature and meaning," she says. "And his lifetime of experience working with the greatest artists in the world — (he's) sharing that with all of us, teachers and staff and children."

She adds that if it were up to d'Amboise, he'd never charge a penny for any of the institute's events — like its Art Nest series, where celebrated dancers and theater artists come and perform, both themselves and with the kids. Actress Glenn Close sang at an event in October, for example. "If it were up to him, he'd give away every ticket for free," she says.

But it's Weinstein's job to make sure the institute remains sustainable for the long haul. And that's her mentor's goal as well.

"He says it all the time," she says. "He wants to see this go beyond his lifetime."