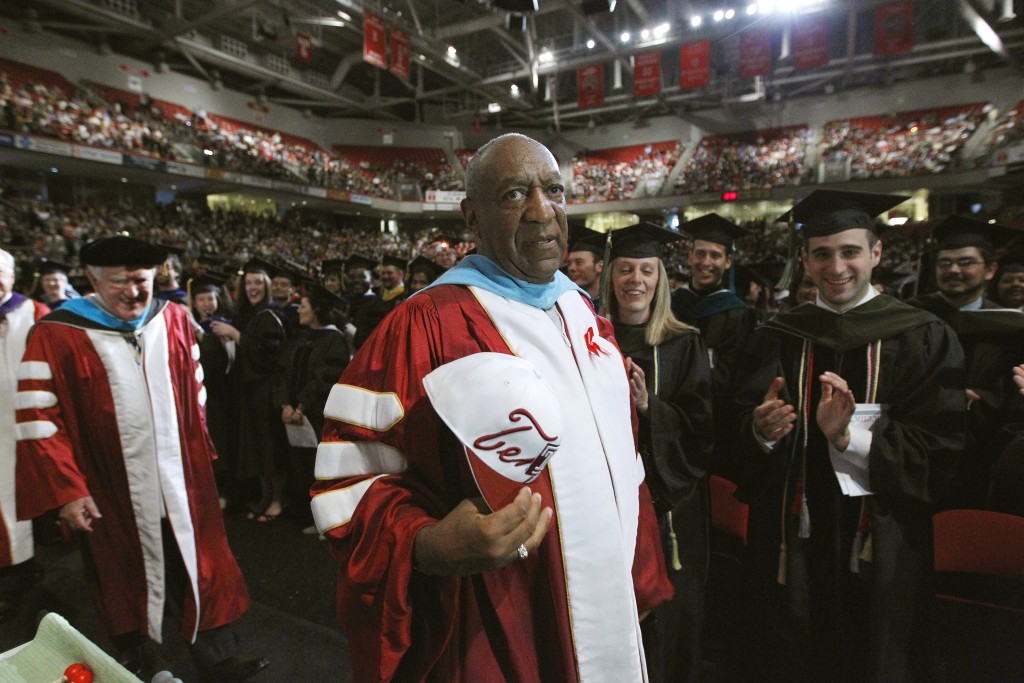 PHILADELPHIA (AP) — Temple University, where Bill Cosby long served as a leading public face and key fundraiser, said Friday it will rescind the honorary doctorate it awarded to the comedian in 1991 because he was convicted of sexually assaulting a former employee.

The Philadelphia university said its board of trustees accepted a recommendation Friday to rescind the degree, citing Thursday's jury verdict finding him guilty of drugging and molesting a woman who managed the school's women's basketball team in 2004.

Cosby received a bachelor's from Temple, which was among few that waited to pull honors from Cosby until after the verdict.

Temple Board of Trustees Chairman Patrick O'Connor previously said he would recuse himself from discussions on the honorary degree. O'Connor represented Cosby in 2005 when he first faced allegations of sexual assault.

Cosby served on the board for decades before resigning in 2014. Cosby almost never attended Temple board meetings, but he frequently turned out to support the school's basketball teams, an interest that connected him with victim Andrea Constand.

Constand said she had socialized with Cosby and then sought him out for career advice before he later knocked her out with three blue pills he called "your friends" and then penetrated her with his fingers as she lay immobilized, unable to resist or say no.

Even before the verdict, more than 20 colleges and universities across the U.S. had revoked honorary degrees from Cosby in light of allegations against him. Ohio State University's governing board pulled a 2001 degree from Cosby this month in the days leading up to his retrial.

Carnegie Mellon University in Pittsburgh, Johns Hopkins in Baltimore, Notre Dame in South Bend, Indiana, and Wesleyan University in Middletown, Connecticut, all announced Thursday they would revoke honorary degrees given to Cosby years ago after the verdict was announced.

Colleges across the country have struggled to decide whether to strip honors from men whose reputations have been tarnished in the wake of the #MeToo movement.

Some have been quick to cut ties, including the University at Buffalo, which revoked an honorary degree from disgraced film mogul Harvey Weinstein, and Fordham University, which pulled an honor from fired news anchor Charlie Rose.

But others besides Boston College have refused. The Juilliard School in New York, which gave an honorary doctorate to actor Kevin Spacey in 2000, said it does not rescind such honors.

Although it traditionally has been rare for schools to rescind honorary degrees retroactively, experts say it has become more common in light of the #MeToo movement. Some schools have been pressured to strip honors by students, faculty or outside critics.

Often it's up to a school's governing board to approve and revoke honorary degrees, which are often awarded to notable alumni or graduation speakers.

AP writer Collin Binkley in Boston contributed to this report.