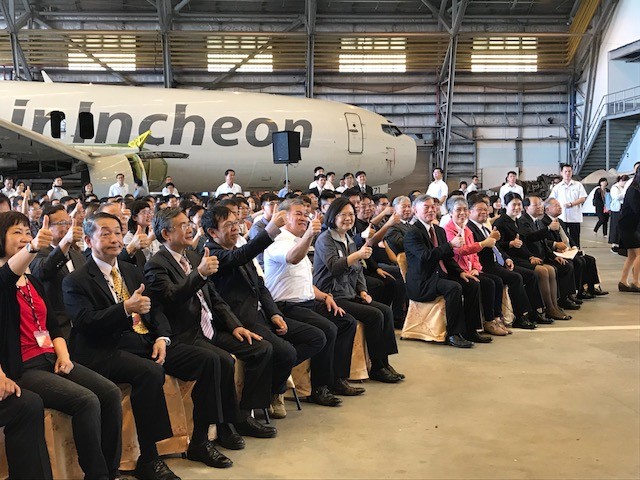 Speaking with the media after the visits, President Tsai emphasized that the government’s 5+2 Industrial Innovation Plan, which aims at pushing forward industrial transformation and creating job opportunities, was not just a slogan.

President Tsai said after she took office in 2016, the Plan has achieved some initial results over the past two years.

The president mentioned she spoke in front of more than 200 new recruits at AACL, which specializes in the maintenance and repair of military and civil aircraft, and that AIDC had also reported hiring 700 engineers thanks to the expansion of its businesses. AIDC now serves as a system integrator for the country’s latest indigenous advanced jet trainer and is in cooperation with dozens of suppliers, including MTC.

The president said she looks forward to seeing more jobs created as the government has implemented clear policies and is actively helping enterprises address their problems.

Earlier the president also said the government had systematically integrated existing and new enterprises, allowing the transformation of not only individual industries but the entire country's economy structure. “We have upgraded Taiwan’s economy,” added the president.

In the end, the president said the government would continue to strengthen industries in central and southern Taiwan so as to create balanced development across different areas of Taiwan.

President Tsai is scheduled to attend the inauguration ceremony of the Ocean Affairs Council on Saturday, a governmental agency in charge of marine-related policies. The president will also visit the Shih An Farm before returning to Taipei.