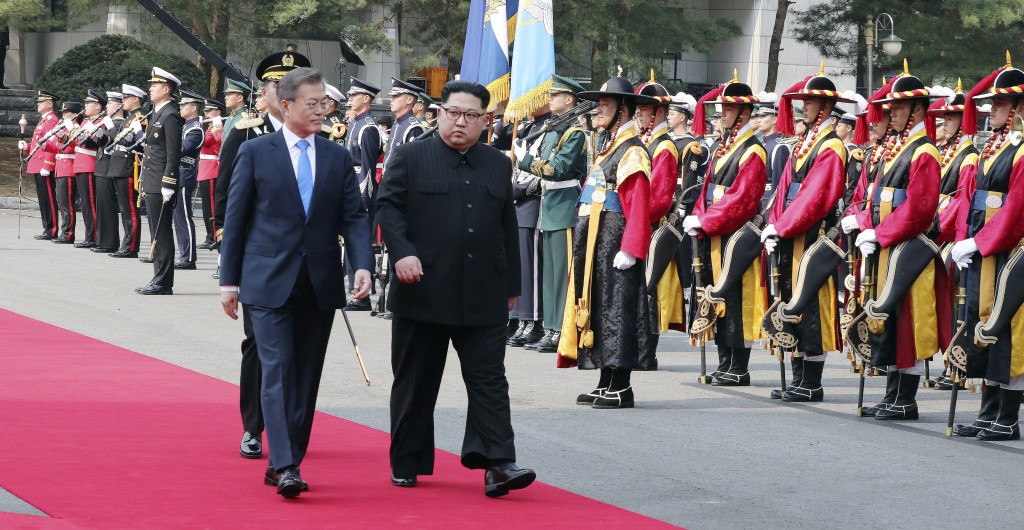 SEOUL, South Korea (AP) — South Koreans watched Friday as history unfolded and Kim Jong Un, the North Korean leader they normally only see in heavily edited footage, walked across the border and had his every word broadcast live and unfiltered on airwaves across the country.

From train platforms to tech forums, South Korean took a pause from their normal routines to get a glimpse of Kim as he became the first North Korean leader to visit South Korean territory. Major South Korean television networks cancelled their usual programming for wall-to-wall coverage of the inter-Korean summit with President Moon Jae-in.

"I can't believe I'm listening to the voice of Kim Jong Un. Someone I have only seen as jpg is speaking now," South Korean Lee Yeon-su wrote on Twitter, referring to a common image format. She told the AP she watched the live footage at home.

It's a dramatic change for South Koreans, who under the National Security Act are banned on threat of jail from accessing media considered pro-North Korean. Websites for the North's official Korean Central News agency and Rodong Shinmun newspaper, which regularly publish propaganda images of Kim, are blocked in South Korea.

South Koreans used the rare opportunity of seeing raw footage of Kim to speculate on everything from his speech habits to his health. Some even said they found Kim cute.

"Most South Koreans probably heard his voice for the first time. I found his way of speaking friendly, like a guy living next door," said Ryu Seok-woo, a reporter at a local news outlet who didn't cover the summit.

Some noted that the reclusive leader, who rules his country unquestioned, seemed to drone on and on in his first speech. They speculated that he had never been stopped or interrupted when speaking before.

There was a moment many South Korean noted when Kim made an off-the-cuff comment about naengmyeon, cold buckwheat noodles that are a North Korean delicacy popular among South Koreans and are to be served at Kim and Moon's dinner meeting.

"Pyongyang naengmyeon that came from afar. Ah, I shouldn't say it's from afar," Kim said before the two leaders started their morning meeting.

Kim appeared to be making a joke about the distance between the two countries. The remarks, which didn't seem to fit with the intimidating image most South Koreans have of Kim, went viral on social media as people shared them in disbelief and even suggested he a future in comedy.

"I thought he had a sense of humor. He's certainly different from his father's generation," said Lee Seung-won, an office worker. "I thought I would never see such scene before I die."

As Kim walked a few hundred meters from the border and climbed some stairs to the Peace House where the summit is taking place, some South Koreans questioned whether the heavyset young leader was physically struggling. When Kim was leaving a message in the guest book, his shoulders appeared to be moving up and down as if he was panting.

"He probably doesn't walk a lot and seemed to be having a hard time," homemaker Cho Jin-joo said, noting that such a common struggle made him feel real. "Before I found him intimidating on the news but today I felt like he was much more human," she said.

Some were sympathetic to Kim.

"Ah, Kim Jong Un panting hard after walking that much. It strikes a chord with people who don't like walking," South Korean Kim Somi confirmed she said in a tweet.

Between the jokes and the big smiles Kim was cracking, some on social media and elsewhere said the rival leader looked cute.

"He was so different from what I saw on the news in the past. He looked friendly. I thought he looked like a teddy bear," said office worker Yang Hae-ra, who watched the footage live on her phone.

Such comments raised the ire of others on social media, who thought it distracted from the fact that Kim is an authoritarian leader.