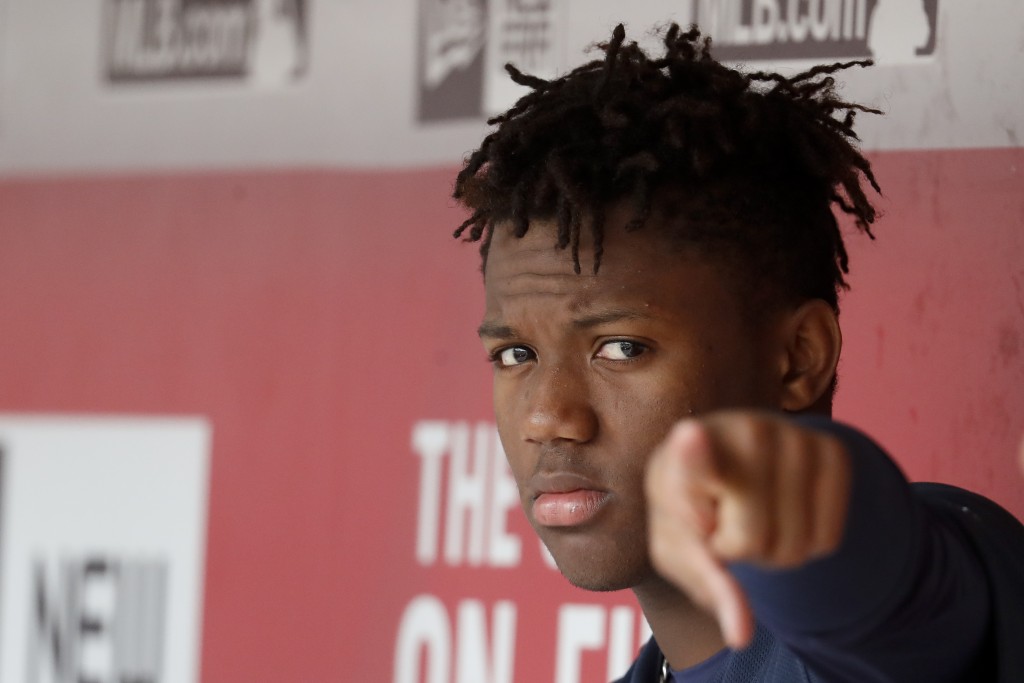 CINCINNATI (AP) — Ronald Acuna Jr. and Ozzie Albies, the two youngest players in the major leagues, both homered and combined for five RBIs to lead Atlanta over the Cincinnati Reds 7-4 Thursday and give the Braves a split of the four-game series.

A day after the 20-year-old Acuna made his big league debut, he homered into the left-field upper deck leading off the second inning, singled in the sixth and hit a tiebreaking double off Wandy Peralta (1-1) in the eighth following Freddie Freeman's third double.

Albies, a 21-year-old who made his debut last August, hit a two-run homer in the fifth for a 4-0 lead and added an RBI double in the ninth.

Sam Freeman (1-1) retired all four batters he faced, and Arodys Vizcaino pitched a one-hit ninth for his second save. Cincinnati dropped to 5-20 for the first time in franchise history.

NEW YORK (AP) — Gary Sanchez hit a three-run homer in the ninth off Fernando Rodney (1-2), extending New York's winning streak to six and completing an 8-2 homestand. The Yankees were held hitless through five innings and trailed 3-0 before Aaron Hicks' sacrifice fly in the seventh.

Dellin Betances (1-1) struck out the side on 13 pitches in the ninth for his first win since June 27.

PITTSBURGH (AP) — Corey Dickerson hit the first game-ending home run of his major league career, a disputed one-out drive in the ninth inning off Alex Wilson, (0-1). A fan reached over the 21-foot wall and caught the ball, and the home run was upheld in a video review.

St. Louis trailed 2-0 in the seventh and 3-2 in the 10th before Jose Martinez's tying double off Jeurys Familia.

PHILADELPHIA (AP) — Jarrod Dyson, Nick Ahmed and David Peralta homered as Arizona improved to 17-7 and matched the 2008 Diamondbacks for the best 24-game start in franchise history

Dyson hit a two-run homer in the first and Chris Owings added an RBI double off Ben Lively (0-2) for a 3-0 lead.