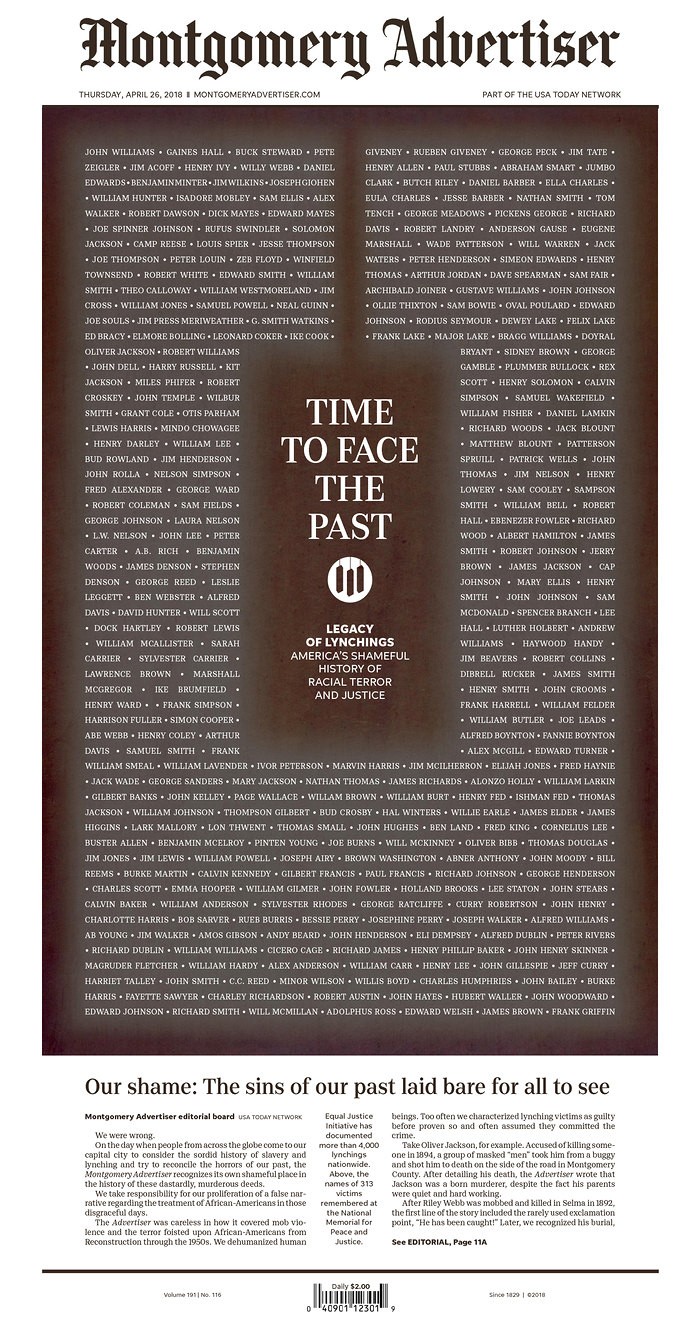 MONTGOMERY, Ala. (AP) — Alabama's capital-city newspaper has published an apology for its "shameful" coverage of mob violence against African-Americans, delivering the message on the same day that the first memorial to America's lynching victims opened a half mile away.

The Montgomery Advertiser's editorial board wrote that "we were wrong" for the way the paper covered lynchings from the 1870s through the 1950s. The board apologized for the paper's "careless" and dehumanizing coverage of lynchings, which it said fed a false narrative about African-Americans and often assumed the victim was guilty of a crime.

"We propagated a world view rooted in racism and the sickening myth of racial superiority," the editorial said.

Founded in 1829, the newspaper was edited by a Confederate veteran after the Civil War.

Bro Krift, the Advertiser's executive editor, said the paper was "clearly complicit" since it failed to hold those who committed mob violence accountable.

"We wrote stories with loaded words," Krift said in an interview. "We were making assumptions about what was going on. That's fundamentally what you're not supposed to do as a journalist. You're supposed to be non-biased."

The editorial concluded a series by the newspaper on the legacy of lynchings and the opening of the nation's first memorial to its victims. The Montgomery-based legal advocacy organization Equal Justice Initiative opened the memorial and a museum to commemorate about 4,400 lynching victims nationwide, including more than 300 people killed in Alabama between 1877 and 1950.

Bryan Stevenson, executive director of the Equal Justice Initiative, said Monday he was proud of the newspaper for acknowledging its past failings in covering lynchings.

In one case reported on by the Advertiser, a group of masked men shot Oliver Jackson after he was accused of killing someone in 1894. The paper's coverage at the time described Jackson as being a born murderer even though his parents were quiet and hardworking.

Krift said he knew from the beginning of the project that the paper needed to apologize for its past before moving forward.

"If we're thinking about where we are as a community, we thought it was good to own up. It's part of the healing process," Krift said.