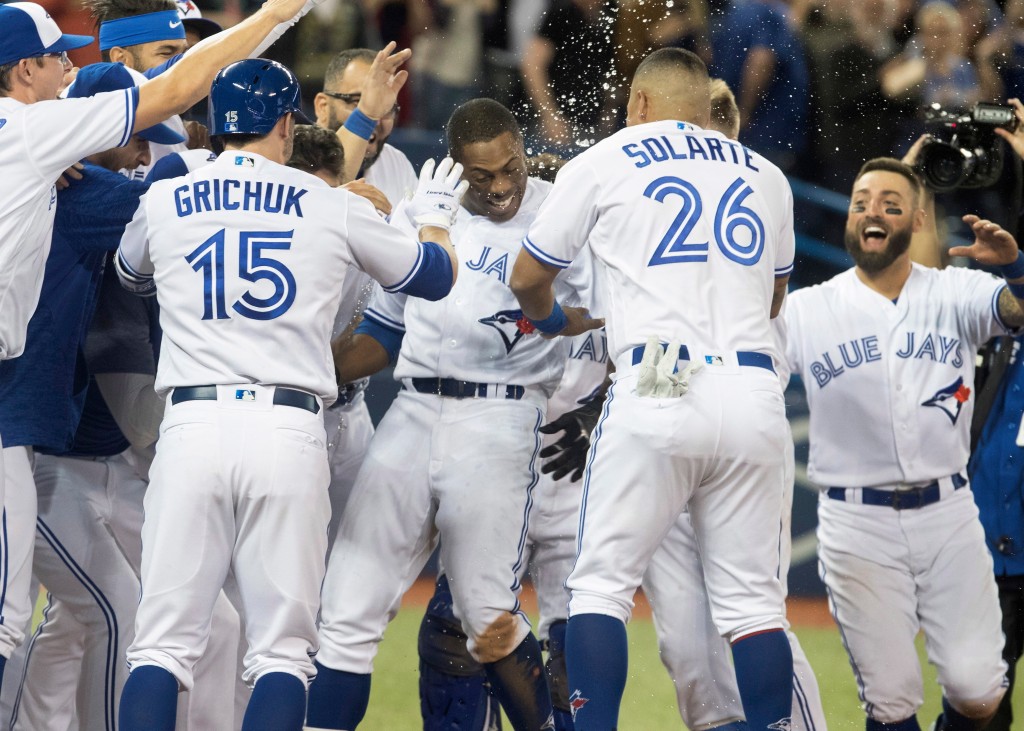 TORONTO (AP) — Curtis Granderson hit a walk-off homer in the 10th inning to give the Toronto Blue Jays a 4-3 win over Boston on Tuesday night and hand the Red Sox their season-worst third straight defeat.

Boston (17-5) still owns the best record in the majors.

Granderon's his third home run of the season came off Red Sox closer Craig Kimbrel (0-1), a towering solo blast off the facing of the third deck in right field. He went 3 for 5 with three RBIs in the Blue Jays' first game since a deadly van attack in Toronto a day earlier. The victims of the attack, which killed 10 and injured 14, were honored along with first responders before the game.

Tyler Clippard (3-0) worked a scoreless 10th for the win.

Blue Jays closer Roberto Osuna was handed a 3-1 lead in the ninth but allowed the Red Sox to tie it, his first blown save in seven chances. Left fielder Granderson threw out Eduardo Nunez at the plate to prevent Boston from taking the lead.

CINCINNATI (AP) — Tyler Mahle lost his no-hit bid on Freddie Freeman's homer in the seventh inning, and Cincinnati blew a big late lead before Scooter Gennett connected in the 12th.

Gennett hit his second homer of the game off left-hander Max Fried (0-1) for his first career game-ending shot.

Freeman started the Braves' late seven-run surge with his homer off Mahle, only the third ball the Braves managed to get out of the infield against the rookie right-hander. Freeman connected again as Atlanta scored four times in the ninth.

Jared Hughes (1-2) escaped a two-on threat in the 10th and got the last eight outs.

NEW YORK (AP) — Didi Gregorius had another big game at Yankee Stadium with a two-run homer and three RBIs, and Gary Sanchez homered twice to help CC Sabathia and New York romp past the Minnesota.

Aaron Judge hit his seventh home run as the Yankees went deep four times for the second straight night. Gleyber Torres had a pair of hits and his first RBI for New York, which extended a winning streak to four for the first time under new manager Aaron Boone and sent the Twins to their season-worst fifth consecutive loss.

Sabathia (1-0) rarely allowed hard contact in his second start back from the disabled list and gave up an unearned run and two hits in six innings. He is 20-9 in 39 regular-season starts against the Twins.

The Cubs won three games in Cleveland's ballpark during the 2016 Series and continued the trend against Josh Tomlin (0-3), who allowed all four homers. Schwarber connected leading off the second and fourth. Willson Contreras went deep in the third and Ian Happ homered in the fourth.

Tyler Chatwood (1-3) won for the first time with the Cubs, allowing one run in six-plus innings. He was pulled after a leadoff single in the seventh.

At 5-15, the rebuilding White Sox are off to their worst start since the 1950 season.

Gonzales (2-2) was in control almost from the start, allowing five hits and one walk while striking out eight in six-plus innings. The left-hander snapped a run of three starts in which he lasted no more than 4 2/3 innings.

Seattle broke out on top against fill-in starter Chris Volstad (0-1) in the fourth when Kyle Seager doubled and scored on Haniger's base hit, both with two outs.

Edwin Diaz worked the ninth for his ninth save in as many tries.

Daniel Descalso and Jarrod Dyson also homered for the Diamondbacks, who upped their NL-best record to 16-6.

Ray was lifted after 107 pitches with two outs in the fifth and couldn't earn the victory. He gave up three runs and five hits and walked three while raising his strikeout total to 43 in 26 1/3 innings.

Fernando Salas (3-1) pitched an inning of relief for the victory.

Avila started his big night by leading off the third with a towering homer to deep right-center off Vince Velasquez (1-3) that caromed off the base of the second deck.

Travis Shaw added a three-run homer for the Brewers, while Zach Davies (2-2) pitched six innings of four-hit ball. Ryan Braun had two hits, walked twice and drove in a run.

Ian Kennedy (1-3) left after allowing four runs over three shaky innings. He took a liner off his ankle in the third but finished the inning before leaving the game.

ARLINGTON, Texas (AP) — Jed Lowrie hit a tiebreaking double in the seventh inning, and Oakland tagged Texas' Cole Hamels with his fourth loss before the end of April for the first time in the left-hander's career.

Texas slugger Adrian Beltre exited with a left hamstring strain in the eighth after pulling up at first base on what would have been a double but was instead a single for his 3,075th career hit.

Lowrie's liner over the glove of diving center fielder Delino DeShields came against reliever Matt Bush after two doubles off Hamels (1-4) in an inning that included a pair of Oakland baserunners getting thrown out at third base.

Andrew Triggs (2-0) allowed one run in six innings with six strikeouts, and former closer Santiago Casilla pitched a scoreless ninth for his first save.