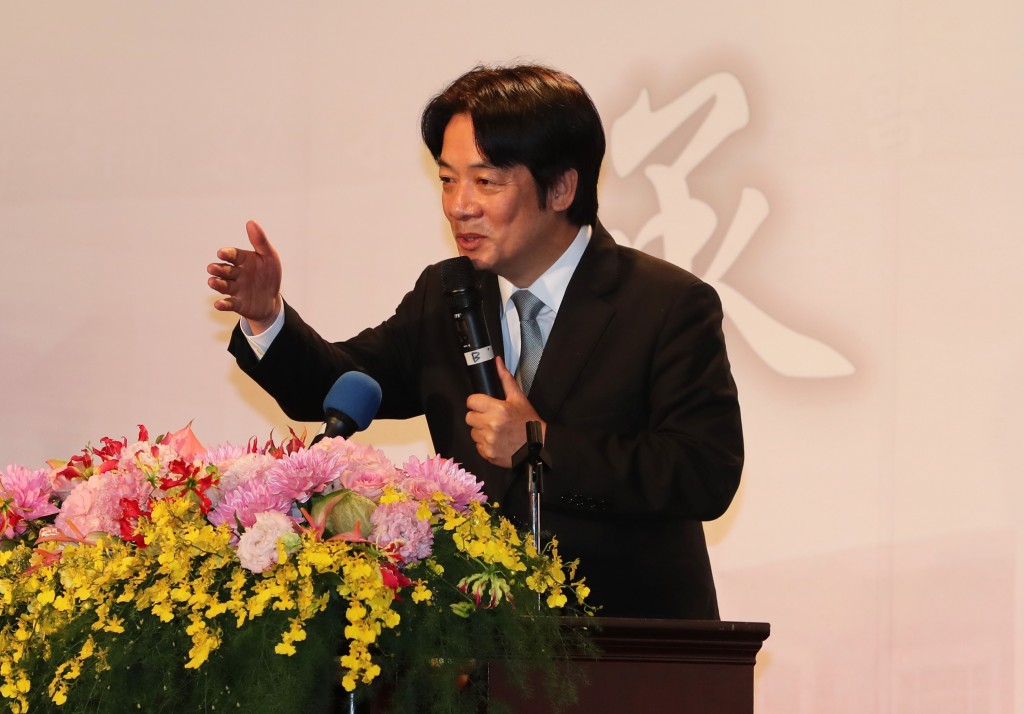 There are few people active in politics today who are consistent from start to finish in what they say. One member of that rare breed is Premier William Lai (賴清德). No matter whether he was running for election to the National Assembly, questioning government officials at the Legislative Yuan, visiting China, or answering questions at the Tainan City Council when he was mayor, Lai has always been consistent in his mentioning of Taiwan Independence.

Even though his Taiwan Independence principles are right, they have not been a Bible that he has stuck to rigidly without any change or variation. After he took office as premier last September, Lai responded to questions from lawmakers with the phrases “Taiwan is a sovereign and independent nation, and its name is the Republic of China” and “we hope that any country can face up to the reality of the Republic of China’s existence.”

Taiwan supporters overseas, who can be considered even more pro-Taiwan than the country’s president or premier, wondered why, if Taiwan was just Taiwan, there still needed to be a mention of the Republic of China? Why not just say “we hope that any country can face up to the reality of Taiwan’s existence?”

On April 15, when Lai clarified his comments that he was a “practical Taiwan Independence worker,” he said: “Taiwan is a sovereign and independent nation, so there is no need to proclaim Taiwan Independence; the future of Taiwan can only be decided by its 23 million citizens, not by any others; taking over as premier, lead the executive team to build the nation, develop the economy, make citizens chose Taiwan and support Taiwan, that is the practical thing to do.”

This conformed to statements by United States Representative Brad Sherman, a Democrat, on May 20, 2015 that Taiwan functioned as an independent country internationally, so Beijing’s comments that Taiwan formed part of China were false, and by Republican Congressman Steve Chabot that Taiwan was a country originally, and would eventually be independent.

On April 17, Ted Yoho, the chairman of the Subcommittee on Asia and the Pacific at the U.S. House of Representatives Committee on Foreign Affairs, told a hearing on strengthening U.S.-Taiwan relations that he was of the opinion that Taiwan is a country, but also cautioned that Chinese leader Xi Jinping (習近平) wanted Taiwan under his control, and that even though the majority of Taiwanese wanted to maintain the existing situation, that situation had already changed. Could the U.S. cooperate with Taiwan in seeking out what the new situation is according to the Taiwanese, Yoho asked. As China grows ever stronger, if no change is made now, it will become more difficult later, Yoho said. These statements completely contradict Premier Lai’s words on April 15 that the government of Taiwan was consistent in its cross-straits policy, namely maintaining the status quo. One can see that the government’s policy of “maintaining the status quo” is a case of the authorities believing in a myth, while the public holds a clearer view. Will President Tsai Ing-wen’s (蔡英文) government team stick to the dream of “maintaining the status quo?”

China’s People’s Liberation Army (PLA) held live-fire drills near the coast of Quanzhou in Fujian Province on April 18, with the official Chinese media saying the maneuvers amounted to “drawing a red line” for the U.S. and Taiwan, to scare off Taiwan Independence and warn the U.S. The PLA was “speaking with cannons,” using military drills to respond to Premier Lai’s statements about practical Taiwan Independence. However, Taiwanese do not scare easily, and each time China makes threats, it pushes the Taiwanese people further away.

In the South China Sea, China demarcated a no-go zone from the morning of April 11 until April 13 at midnight for its military drills, but the U.S. sent its Roosevelt aircraft carrier group into the area for Freedom of Navigation Operations (FONOPS) as if nothing had happened, surprising Brunei, Malaysia, Indonesia, the Philippines, Vietnam and Singapore. Instead of continuing with its intended three days of drills, the PLA shut up shop after just one day, so we must ask China, was it warning the U. S. or being warned by the U.S.?

(The author is a former deputy secretary-general of the Taiwan Association of University Professors and a retired associate professor at the National Hsinchu University of Education.)