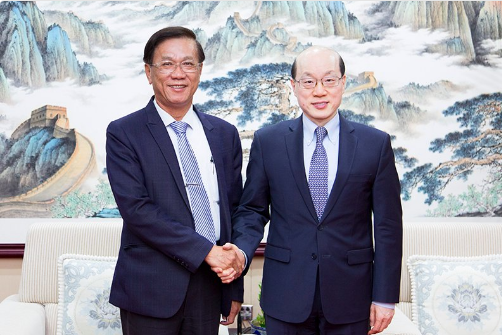 TAIPEI (Taiwan News) -- Two Taiwanese county magistrates paid a visit to China this week to meet with China’s Taiwan Affairs Office (TAO) chief, as China conducts live-fire military drills in the Taiwan Strait, which many media outlets have framed as a direct warning to Taiwan’s government.

Lin Ming-chen (林明溱), the county magistrate of Nantou county, and Fu Kun-chi (傅崐萁), the magistrate of Hualien county both met with China’s top diplomat for Taiwan affairs, and the former UN representative for China, Liu Jieyi (劉結一), one day after one another (Lin on April 17, and Fu on April 18).

Liu was recently selected for the TAO office post at the 19th National Congress of the Communist Party held last October. He officially took the leadership post on March 21.

Liu firmly emphasizes the “1992 Consensus” and “One China” principle as prerequisites for the improvement of cross-strait relations in his position as TAO chief.

UDN and Chinese Media report that while speaking with both county magistrates, Liu suggested that an adherence to the “1992 Consensus” and a firm opposition to Taiwan Independence are crucial to maintaining peaceful cross-Strait relations.

Most Taiwanese people and political commentators agree that the “1992 Consensus,” which refers to a meeting between the two countries in 1992, is little more than a political slogan, created in the early 2000s, which has been used by the KMT and the Communist Party of China as a rhetorical device to support Beijing’s claims to Taiwan.

Taiwan’s main government organization tasked with Chinese affairs, the MAC, has previously stated that that the “One China Principle” and the “1992 Consensus” employed as they are by Beijing do not adequately reflect the status quo, and are intended to impose authoritarian pre-conditions for cross-strait dialogue on Taiwan’s democratic society, which is wholly unacceptable. Lin Ming-chen, a KMT politician, is running for re-election in Nantou County for a second term as magistrate in the upcoming November elections. In the 2014 elections he narrowly won the office despite increasing DPP support in the county, with 50.96 percent of the vote over DPP challenger Lee Wen-Chung who had 49.04 percent of the vote.

Fu Kun-chi, registered as an independent though associated with the KMT, has already served two terms as the Magistrate of Hualien County, and since he is unable to run again, his wife Hsu Chen-wei (徐榛蔚), who is a KMT legislator, will be running for the office in his stead.

Given the timing of the magistrates’ visits abroad and the political optics of expressing agreement with Beijing’s representations of Taiwan, especially during the same week as live-fire military drills in the Taiwan Strait, and before important nation-wide elections later this year, it is unclear what Lin and Fu hope to accomplish with such a political stunt.

Recently, the New Taipei City Mayor, Eric Chu, made a similarly questionable trip to meet with the TAO chief on March 26, the same day that Beijing commanded military aircraft to fly through Taiwan’s Air Defense Identification Zone, raising alarms across the country.