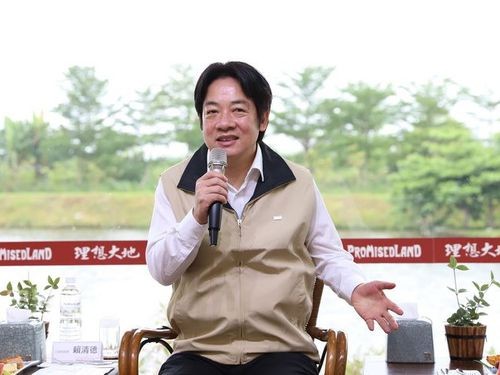 Taipei, April 15 (CNA) Premier Lai Ching-te on Sunday once again described his approach toward Taiwan independence as being pragmatic and based on three basic beliefs.

At a media roundtable in Hualien County, Lai was asked about his depiction of himself as a "political worker for Taiwan independence," after most recently using the term on April 3 at a seminar on freedom of speech held by the Ministry of the Interior.

There were three basic beliefs behind the position, Lai said, the first being that Taiwan is a sovereign, independent country and therefore does not need to declare Taiwan independence.

Second, only the country's 23 million people have the right to decide Taiwan's future, and third, building up Taiwan and making it stronger and more attractive to the people so they support it is practical approach toward Taiwan independence, Lai said.

It also means developing Taiwan's economy and creating growth so that people can live and work in peace, maintaining peaceful development and enhancing mutual understanding across the Taiwan Strait, and working with Japan, South Korea and the Untied States to ensure security in the Asia-Pacific region, he said.

Lai's rhetoric on the issue, while consistently focusing on his role as a Taiwan independence "worker," has seen differences in tone over the past year.

At the April 3 seminar, Lai recalled saying during his first administrative report as premier to the Legislative Yuan in September 2017 that he was a "Taiwan independence worker," but "I did not say I advocate Taiwan independence."

During his report to the Legislature on Sept. 26, 2017, however, Lai told lawmakers that when he was mayor of Tainan, he said to city council that he was a "political worker who advocates Taiwan independence" and that "this will not change, no matter what position I'm in."

He also said in June 2017 while still Tainan mayor, "I'm pro-China, love Taiwan," and argued at the legislative hearing in September that this was not contradictory with his Taiwan independence stance.

He said that "pro-China, love Taiwan" means "extending our friendship to China, with Taiwan at the center."

Whatever the shifts in Lai's rhetoric, China has seen it as being clearly pro-Taiwan independence, something Beijing strongly opposes.

Chinese media reported that the People's Liberation Army (PLA) live-fire exercises to be held on April 18 in the Taiwan Strait are a warning after Lai's recent pro-independence statements.

Lai responded that his support for Taiwan independence started in the 1990s and his political beliefs are well known.