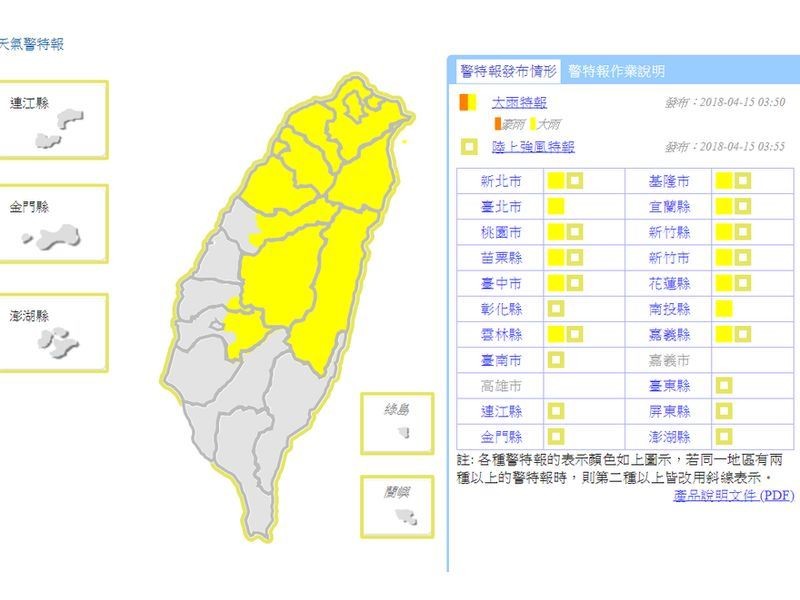 Taipei, April 15 (CNA) Cooler weather accompanied by strong winds and plenty of rain is forecast for Taiwan on Sunday due to a passing front and strengthening northeasterly winds, the Central Weather Bureau (CWB) said.

The passing front is expected to continue to bring showers or thunder showers to areas north of central Taiwan, as well as Yilan and Hualien in the east, according to the CWB.

Northern Taiwan, Yilan and Hualien as well as mountainous areas of central Taiwan should be alert to heavy rain, thunder and flooding in low lying areas, according to the CWB.

Under the influence of northeasterly winds, the CWB issued strong wind warnings for 18 cities and counties across the country.

In particular, strong winds are expected in areas north of Tainan and eastern Taiwan as well as coastal open areas of the offshore islands of Penghu, Matsu and Kinmen and neighboring sea areas where the winds, at an intensity of 9-10, could cause major waves, according to the CWB.

Meanwhile, daytime high temperatures in areas north of Hsinchu and Yilan on Sunday will drop to 20-22 degrees Celsius, 27-28 degrees in central Taiwan and Taitung, 24 degrees in Hualien and 30-32 degrees in southern Taiwan, the CWB said.

Lows of 16-21 degrees can be expected around Taiwan at night and during the early morning hours on Monday, the bureau said.

Highs on Monday in northern Taiwan will be similar to Sunday's, while a drop in temperature of 2-3 degrees can be expected in other areas.

From Monday to Tuesday, as northeasterly winds and the weather front move eastward, there is still a chance of rain across Taiwan, with northern and northeastern Taiwan expected to see wet and cool weather throughout the day, while other areas can expect cool temperatures during the early morning and late night, the CWB said.

Daytime highs are expected to gradually rise on Wednesday due to reduced moisture, but cool weather will remain during the early morning and late night, according to the CWB.