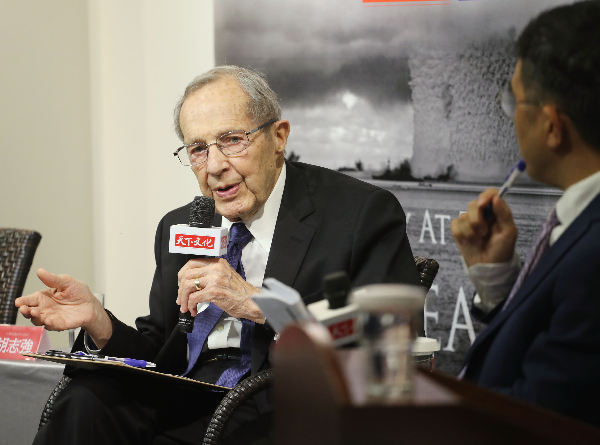 "My advice is that as long as the Chinese do not violate your boundaries and your sovereignty, play cool," said Perry, who is visiting Taiwan to promote the Chinese version of his book "My Journey at the Nuclear Brink," which is about his experience dealing with the threat of nuclear weapons and his efforts to keep the world safe from a nuclear catastrophe.

Perry was responding to questions from reporters about how Taiwan should respond to a Chinese military drill scheduled to occur in the Taiwan Strait next week.

"Don't read something into it that might or might not be there," Perry continued. "If they call it a drill, accept it as a drill."

China's People's Liberation Army announced Thursday it will conduct a live-fire military drill in the Taiwan Strait on April 18. The announcement came as increased American support for Taiwan heightened tensions between the U.S. and China.

Perry served as secretary of defense from 1994-1997 under President Bill Clinton. During the 1996 Taiwan Strait missile crisis, he urged Clinton to dispatch two aircraft carriers to patrol waters near the Taiwan Strait.

On Friday, Perry said the U.S. acted very strongly during the 1996 crisis because "it was more than a drill."

"It was an attempted coercion, using military force coercion. So I thought, it was appropriate to have a strong response," he said.

When asked if he would support a similar U.S. intervention as he did in 1996, if China were to invade Taiwan today, Perry said a lot has changed since 1996, and there is now free travel and robust economic exchanges between Taiwan and China.

"I have much more confidence in the security of Taiwan today than I had in 1996," he said. "I don't see any basis for believing that China is trying to stimulate a military action on Taiwan."

When asked if he thinks the U.S. should sell Taiwan advanced F-35 fighter jets, which Taiwan has expressed interest in purchasing, Perry said the jets are "very expensive" and "probably not necessary."

The previous generations of fighter jets that Taiwan already has "are very, very good," he said, adding that he believes the training that pilots receive makes more of a difference in combat than the types of aircrafts they fly.

When he was defense secretary, Perry said, his recommendation to Taiwan was to improve its air capabilities by spending more time and money on training than on buying the latest hardware.

"I think that generality still holds true today," he said.

"If I were advising the Taiwanese defense ministry today on how to improve its air-to-air capability, I would advise it to put most of its resources and energy into training, and most of it into building better air-to-air missiles," rather than trying to buy the latest aircrafts, which can be very expensive, he said.