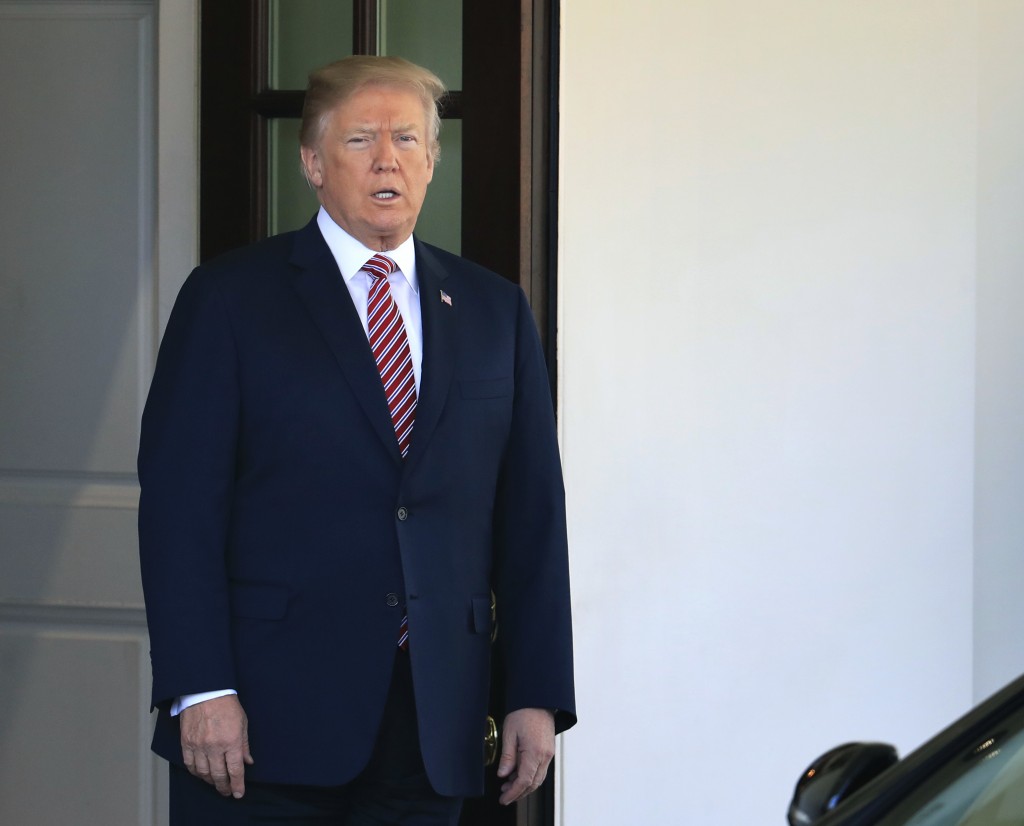 WASHINGTON (AP) — Trump administration officials have consulted with global allies on a possible joint military response to Syria's alleged poison gas attack, as President Donald Trump canceled a foreign trip in order to manage a crisis that is testing his vow to stand up to Syrian President Bashar Assad.

Trump spoke with other world leaders, and other U.S. officials said the U.S., France and Britain were in extensive consultations about launching a military strike as early as the end of this week. None of the three countries' leaders had made a firm decision, according to the officials, who were not authorized to discuss military planning by name.

A joint military operation, possibly with France rather than the U.S. in the lead, could send a message of international unity about enforcing the prohibitions on chemical weapons and counter Syria's political and military support from Russia and Iran.

President Emmanuel Macron said France, the U.S. and Britain will decide how to respond in the coming days. He called for a "strong and joint response" to the attack in the Syrian town of Douma on Saturday, which Syrian activists and rescuers say killed 40 people. The Syrian government denies responsibility.

The French president does not need parliamentary permission to launch a military operation. France is already involved in the U.S.-led coalition created in 2014 to fight the Islamic State group in Syria and Iraq. Multiple IS attacks have targeted French soil, including one last month.

Trump suggested Monday he had little doubt that Syrian government forces were to blame for what he said was a chemical attack, but neither he nor other administration officials have produced hard evidence. Officials suggested such evidence was lacking, or at least not yet at hand. This is in contrast to an incident one year ago in which U.S. intelligence agencies had video and other evidence of certain aspects of the actual attack, which involved the use of Sarin gas. Trump responded by launching Navy cruise missiles at a Syrian airfield.

One official said the U.S., France and Britain were considering military options that would be more extensive than the punitive, one-day strike last April. That strike did not appear to have had the desired effect of deterring Assad from further use of chemical agents. So the three countries are discussing a range of options, including preventing Assad from conducting future attacks by striking military capabilities involved in carrying out such attack, the official said.

Asked whether France would take military action, Macron said his country will continue discussing technical and strategic information with U.S. and British allies and "in the coming days we will announce our decision." He said any action would "target chemical weapons" stocks. Under a 2013 agreement for which Russia was a guarantor, Syria was to have eliminated all its chemical weapons, but it has used chlorine and perhaps other chemicals since then.

Trump spoke by phone with British Prime Minister Theresa May. A British government statement said the two agreed the attack in Syria was "utterly reprehensible" and that the international community must respond "to uphold the worldwide prohibition on the use of chemical weapons." Trump met at the White House with the emir of Qatar, Sheikh Tamim bin Hamad Al Thani, who told reporters that he and Trump "see eye to eye" on the Syria problem.

"We cannot tolerate with a war criminal," the emir said, adding, "This matter should end immediately." Qatar hosts the United States' main air operations center for the Middle East, which would coordinate any American air attack in Syria.

A watchdog agency, the Organization for the Prohibition of Chemical Weapons, announced that it will send "shortly" a fact-finding mission to Douma, after receiving a request from the Syrian government and its Russian backers to investigate the allegations. It was not immediately clear whether that visit would delay or avert U.S. or allied military action.

The Russian military, which has troops in Syria, said on Monday that its officers had visited the site of the alleged attack and found no evidence to back up reports of poison gas being used.

Defense Secretary Jim Mattis canceled plans to travel to California this week, indicating his focus on Syria. He was expected at a White House meeting Wednesday for further consultations on Syria.

White House spokeswoman Sarah Huckabee Sanders said that Trump will not attend the 8th Summit of the Americas in Lima, Peru, or travel to Bogota, Colombia, as planned. She said he will stay home to "oversee the American response to Syria and to monitor developments around the world."

The president's new national security adviser, John Bolton, urged Trump to skip the trip, an official said. This reflects a view in the White House that deeper Russian and Iranian involvement in Syria have complicated calculations about a response to any U.S. military attack, according to the official, who spoke on condition of anonymity to discuss internal deliberations. Moscow has cautioned the U.S. not to launch a military attack.

Amid the tough talk from the White House, the U.S. military appeared to be in position to carry out any attack order. A Navy destroyer, the USS Donald Cook, got underway in the eastern Mediterranean on Monday after completing a port call in Cyprus. The guided missile destroyer is armed with Tomahawk cruise missiles, the weapon of choice in a U.S. attack one year ago on an airfield in Syria following an alleged sarin gas attack on civilians.

Also, the Navy said the USS Harry S. Truman aircraft carrier and its strike group will depart Norfolk, Virginia, on Wednesday for a regularly scheduled deployment to Europe. The Navy does not currently have a carrier in the Persian Gulf.