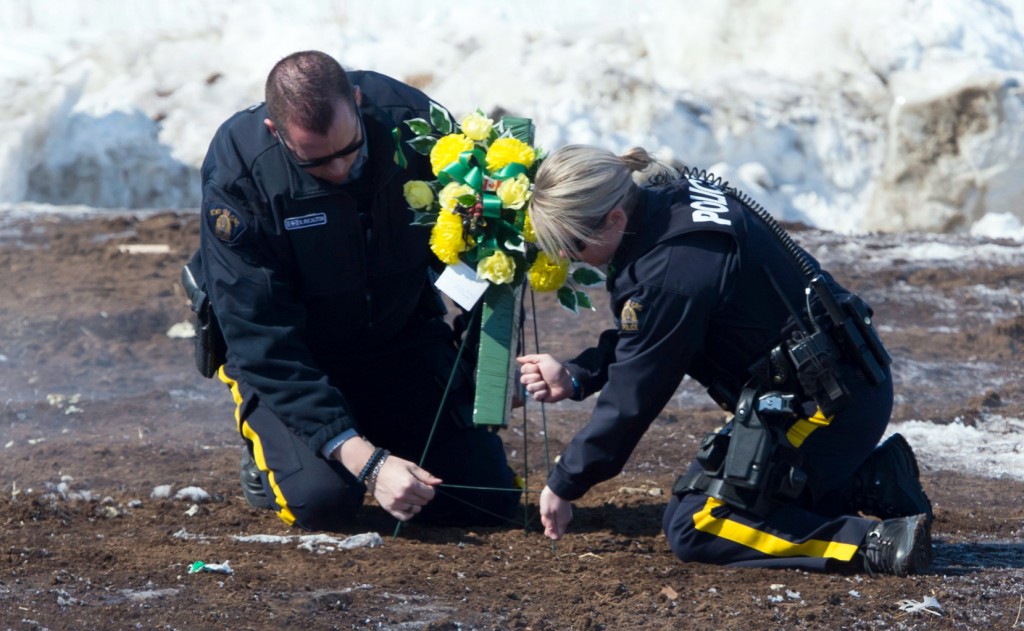 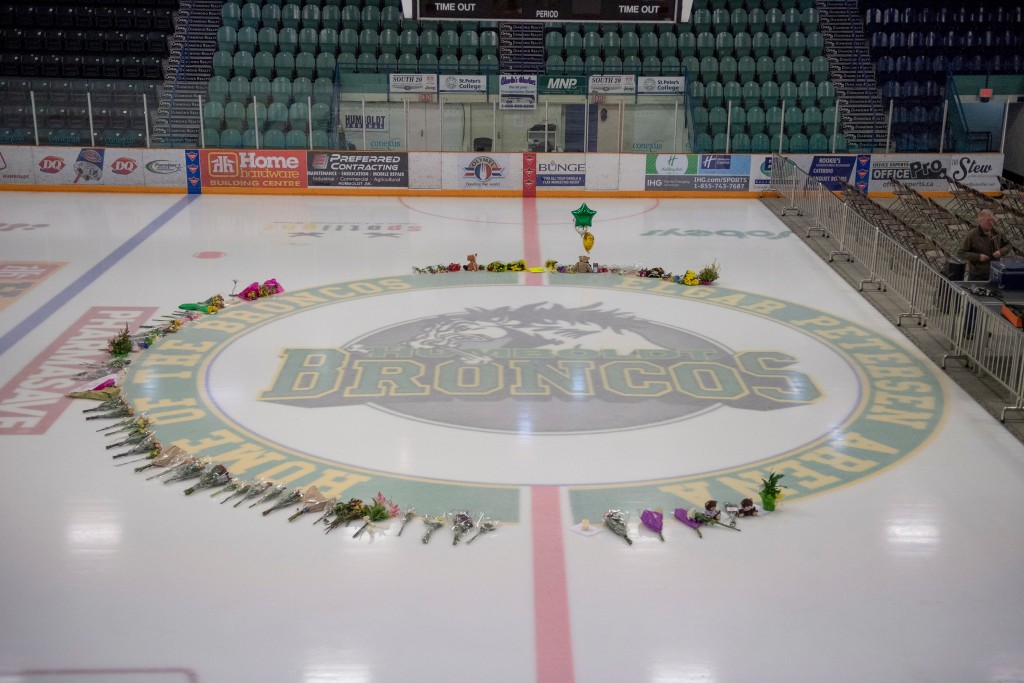 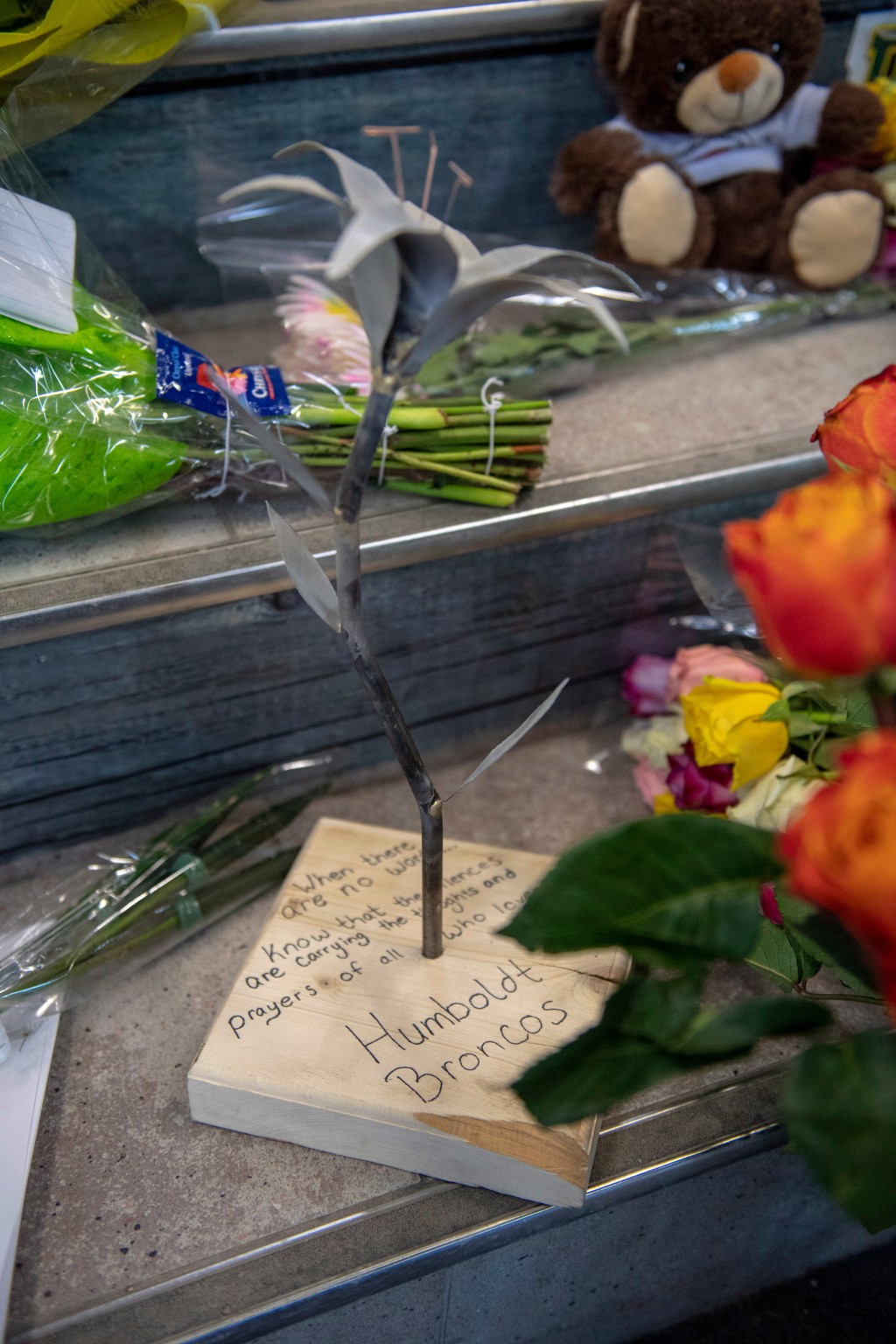 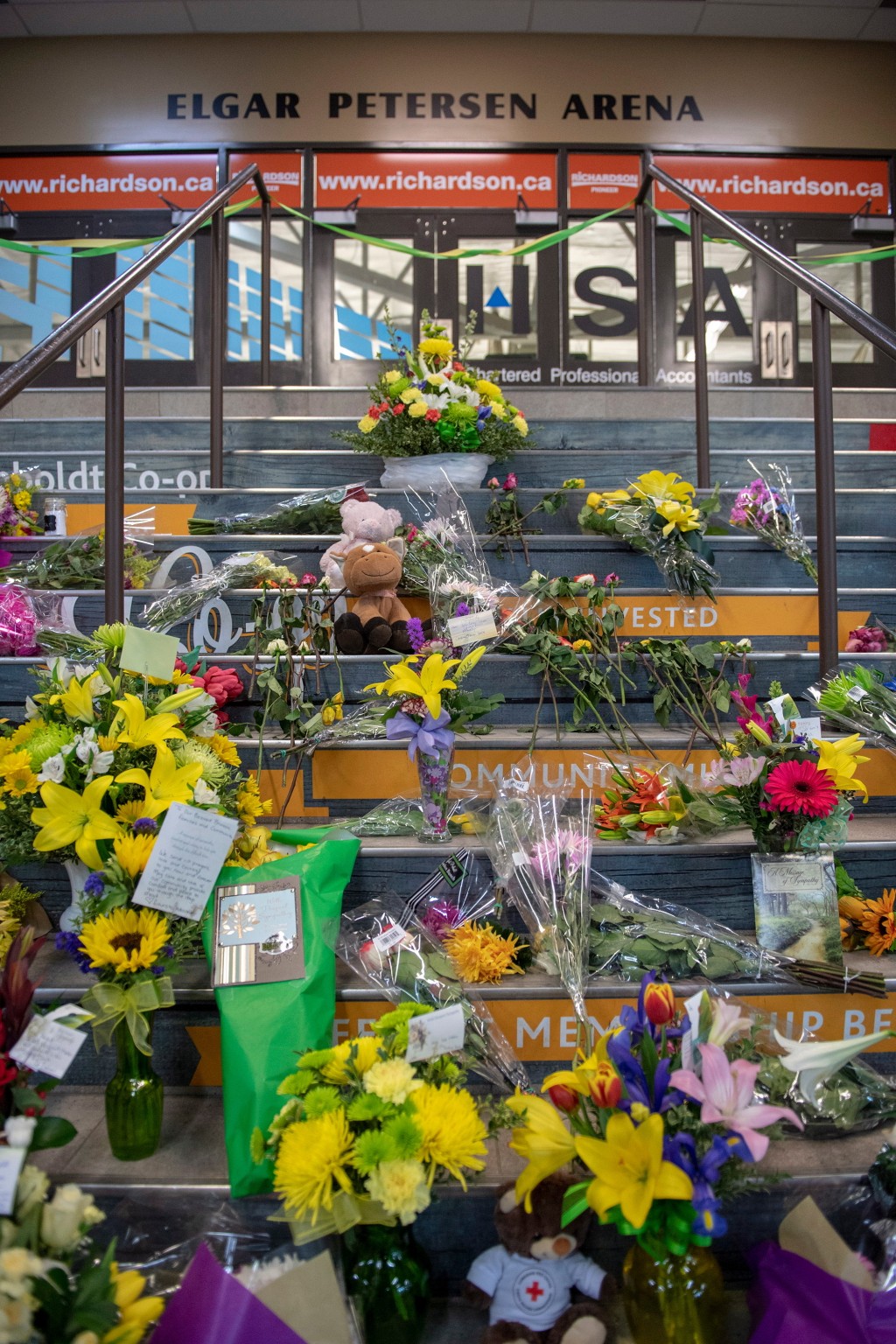 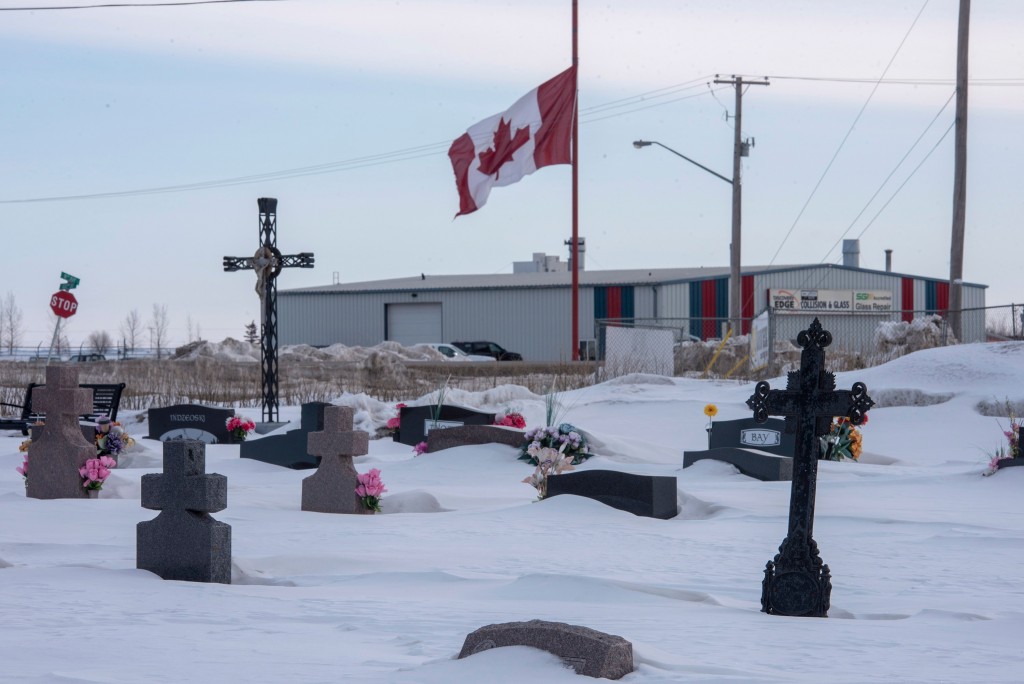 HUMBOLDT, Saskatchewan (AP) — A junior hockey team was en route to a crucial playoff game Friday when a tractor-trailer slammed into their chartered bus, killing 15 and sending shock waves through a small town on the Canadian plain.

More than half the passengers on the Humboldt Broncos' bus were killed. Most were players who hailed from the prairie provinces known for farming, but victims also included coaches, a radio announcer, team statistician and a bus driver accustomed to weathering hazardous road conditions.

The team's first line, including the team captain and the son of a former NHL player, all died. Three of the young players killed were named Logan.

Family members, friends and former team managers provided a glimpse of most of those who died:

Logan Schatz, 20, was a four-year veteran of the Broncos and had been captain for more than half his time with the team. The high-scoring center was the Saskatchewan Junior Hockey League's player of the month twice this season.

Schatz had praised the two publicly in January. "I've really clicked with Joseph and Lukan," he said on the team's website. "I can't say enough good things about them."

Joseph, 20, the son of former NHL player Chris Joseph, was among the leading scorers in the league playoffs. He had previously played on the St. Albert Raiders with Lukan.

The death of Lukan, 21, of Slave Lake, Alberta, was announced by the Raiders on Twitter.

Wack, 21, had played two seasons with the Broncos and "absolutely lived and breathed hockey," his cousin Alicia Wack said.

"Stephen has always been an amazing person, son, big brother, and cousin," she said on Facebook. "He is one of the most adventurous, ambitious, and loving people that I have ever been blessed to know."

Hunter was a great hockey player and a smart kid with a great sense of humor, said Kevin Porter, president of the Raiders. "He always had a smile on his face," Porter said.

Tributes to head coach Darcy Haugan described him as a great person, coach and mentor.

"He will always be a great man in our hearts," said his sister, who posted on Twitter under the name Debbie Jayne. "The tears just keep coming."

Haugan played in the junior hockey league in the 1990s.

Steven Wilson, a radio play-by-play announcer, called Haugan "the classiest guy" in the league. The last time they saw each other, Haugan was playing video games in his office with one of his two young sons.

"He was very dedicated to his family and at the same time he was a hockey guy," Wilson said.

One of Haugan's assistants was Mark Cross, who had joined the team after being named most valuable player last year while playing with the Maroons in the Highway Hockey League.

"Mark was one of those people that just made you feel safe and brought a special spark when you were in his presence."

Bus driver Glen Doerksen was accustomed to driving routes between rinks for Charlie's Charters, the official carrier for more than a half dozen hockey teams. He was no stranger to the storms that sweep across the plain during the long winter.

"Our trips to Foam Lake and Allan were on horrible highways due to winter storms," Kris Babbings, manager of the Kinistino Tigers, said on Twitter. "We got on that bus and trusted him with our lives and both times he got us home safely. Tragically yesterday he and many others didn't make it home and our hearts are broken for your families and friends."

Babbings said he would never forget the smile on Doerksen's face after the Tigers won their championship in Allan last month. The team asked the driver to honk his horn twice "for the cup."

"Tonight, Glen, we give two honks for you," he wrote. "Rest easy sir."

CALLING THE SHOTS ON AIR AND PLAYS ON SIDELINES

Tyler Bieber was in his first season as the team's play-by-play announcer for Humboldt radio station CHBO, where he also covered news.

"He definitely had a natural talent," said Wilson, a co-worker in Weyburn, Saskatchewan. "He was just passionate about sports."

Bieber was also mentoring Brody Hinz, 18, the team statistician and radio station intern who died in the crash, Lydon Frieson, president of Golden West Radio, said in a statement posted on the station's website.

"Tragedy has hit our community and it reaches into every corner of life in Humboldt," Frieson said.

GIVING LIFE TO OTHERS

Logan Boulet signed his organ donor card when he turned 21 a few weeks ago and made his wishes very clear to his family, his godfather, Neil Langevin, said on Facebook.

Matches were made for all of Boulet's vital organs and his family planned to stay by his side until the surgery to remove them, Langevin said. Other organs would be donated to science.

"These actions alone give voice to the selfless and benevolent nature Logan possessed in life for others," Langevin said. "He is a great hero and one of the nicest people you would have been lucky enough to meet."

Evan Thomas, 18, a rookie with the team, was remembered as an excellent and devoted player, but perhaps more dedicated to his peers.

The Saskatoon native was self-motivated, driven and self-assured, said his father, Scott Thomas, captain of the Tacoma Rockets in the 1991-92 Western Hockey League season. He was the "kind of kid any dad would be proud to call his own," he said.

Evan Thomas played hockey and baseball and was a strong student.

"He liked sports, but at times I think he tolerated sports so he could be a teammate," his father said. "He loved his teammates and I think that was more important to him than the actual sport he was playing.

JUNIOR MEMBER OF THE SQUAD

Adam Herold was a week shy of turning 17 and had only played with the Broncos for two weeks. The defenseman was the youngest member on the team.

He was sent to join the Broncos for the playoffs after his previous team, the Regina Pat Canadians, finished their season, said John Smith, his former team's manager. Herold had been captain of that team and was a good leader.

"He was a wonderful young man," Smith said. "Never afraid to help his teammates. Always there for them. Good, typical Saskatchewan farm boy. Always load the bus, unload the bus, never afraid to roll up his sleeves and get work done."

Herold lived in Humboldt with teammates Hunter and Xavier Labelle, 18, who were hosted by the same family: Devin and Rene Cannon and their two daughters.

Labelle had lived there two years, beginning when he was 16.

"He just had a million things going for him," Rene Cannon told CBC News, adding he was also a top student. "And he did every single bit of it with a goofy grin on his face."

Cannon posted a photo of the three teammates on Twitter and wrote: "Goodbye my sweet sons."

Labelle's brother, Isaac, described him as a best friend, teammate and ally.

"I have no words to describe what I'm feeling," Isaac Labelle wrote on Instagram. "We've been through so much together. We had a special bond from the day you were born."

SMILE LIT UP A ROOM

Jacob Leicht, 19, was remembered by a family member for his reliability, contagious laughter and a smile that lit up any room.

"My heart is broken," Cassidy Tolley wrote on Facebook in a post that included a high school graduation photo of Leicht and his team photo. "Bad things truly happen to the best people, and I can't wait until I get to see you again. Heaven gained so many beautiful people yesterday, may you all rest easy."

This story has been corrected to show that Conner Lukan's death was announced by the St. Albert Raiders, not the Spruce Grove Saints. Three of Lukan's teammates, Stephen Wack, Jaxon Joseph and Logan Hunter, also played for the Raiders, not the Saints.