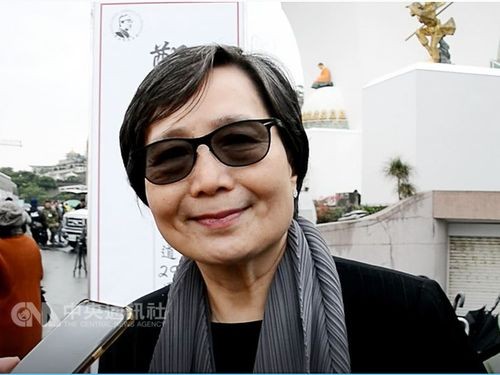 TAIPEI (CNA) -- Taiwan has achieved complete freedom of expression since the days of totalitarian rule, but that freedom is now under threat from China, Yeh Chu-lan (葉菊蘭), former vice premier and wife of pro-democracy pioneer Cheng Nan-jung (鄭南榕), said Saturday on Taiwan's Freedom of Speech Day.

Speaking to reporters after an event at National Taiwan University (NTU), Yeh said the totalitarian Kuomintang regime used to be the main threat to freedom of expression in Taiwan, but now it is China.

"We could lose our freedom of expression anytime in the face of Chinese hegemony. We see the forced disappearance of Lee Ming-che (李明哲), the forced apologies of Taiwanese businesses and the self-censorship of many in the entertainment world," Yeh said.

Therefore, she said, Taiwanese people should not only cherish their freedom of speech, but also continue to advocate its importance and remember those who fought for the rights they now enjoy.

In 2016, the Executive Yuan designated April 7 Freedom of Speech Day to commemorate the death of Cheng, who, as editor-in-chief of a magazine, set himself on fire in defense of "100 percent freedom of expression" on April 7, 1989, as police were about to arrest him for sedition.

An event featuring music and theater performances was held at NTU on Saturday to remember Cheng's sacrifice.

Cheng's daughter Cheng Chu-mei (鄭竹梅), who also attended the event, was asked about her expectations for the newly assembled Transitional Justice Promotion Committee.

The Cabinet on Saturday announced the three remaining nominees to the committee, which is tasked with uncovering the history of political repression during Taiwan's martial law period as a foundation for social reconciliation.

In response, Cheng Chu-mei said she hopes civil society will fulfill its responsibility of supervising the work of the committee, so that more documents from the period can be made public.

"There are a lot of things that we still don't know. To a certain extent, the White Terror period never really ended for us," she said. "The scariest thing is ignorance."

Also attending the Saturday event was former political prisoner Tsai Kun-lin (蔡焜霖), who was imprisoned in the 1950s during the White Terror period for joining a book club.

He touted Cheng Nan-jung as an "action thinker" and expressed hope that the young generation will follow in Cheng's footsteps and take up the fight against the suppression of free speech, the rise of fake news and other modern day challenges.

In 1989, Cheng Nan-jung, also known as Nylon Cheng, was charged with insurrection after he reprinted a draft Constitution of the "Republic of Taiwan" in Freedom Era Weekly magazine, of which he was editor-in-chief.

He refused to appear in court and when police went to the magazine's office in Taipei to arrest him on April 7, 1989, he committed suicide by self-immolation.

At the time, any advocacy to replace the constitution with a new charter to establish a new nation was prohibited under Article 100 of the Criminal Code, and the maximum penalty was life imprisonment.

The article was amended in 1992 to stipulate that it was a crime only if such advocacy promoted the use of violence.