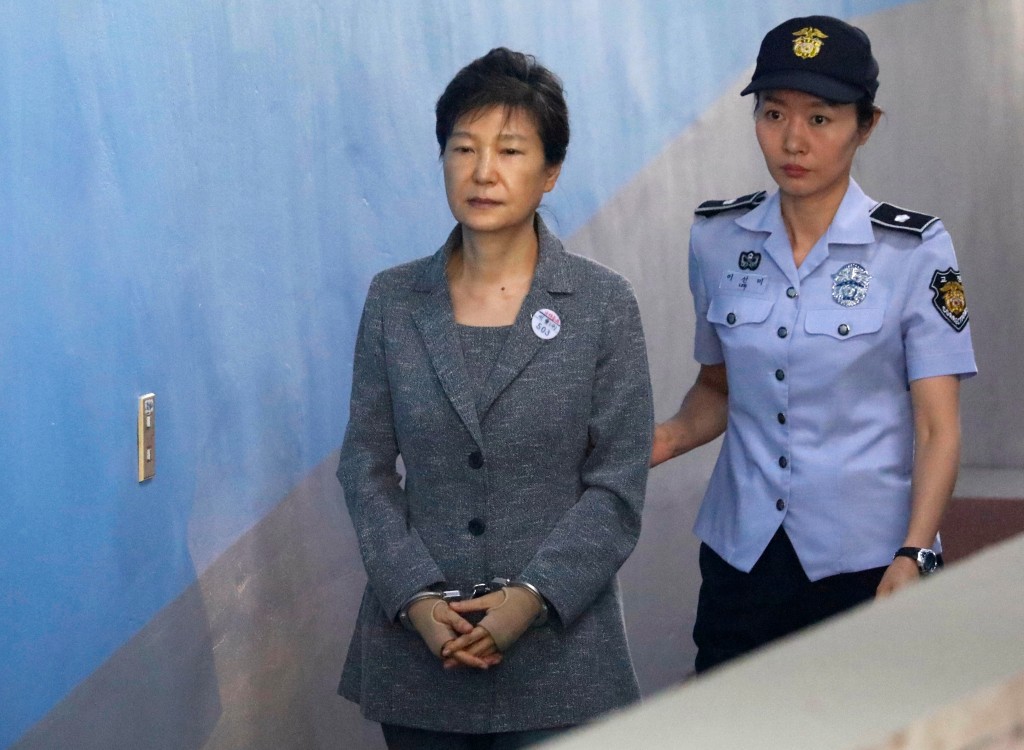 SEOUL, South Korea (AP) — In the same courtroom where an ex-military dictator was once sentenced to death, Park Geun-hye's corruption conviction on Friday extended the tradition of South Korean presidencies ending badly. Nearly every former president, or their family members and aides, have been mired in scandals near the end of their terms or after they left office. One leader, Park's father, was assassinated by his spy chief, and another former president killed himself.

The U.S.-educated Christian leader and independence fighter became South Korea's first president in 1948 with help from the United States, three years after the Korean Peninsula was liberated from Japanese colonial rule at the end of World War II. Rhee's government became increasingly authoritarian, especially after the 1950-53 Korean War. Critics accused Rhee of corruption and nepotism as he attempted to prolong his hold on power. He won his fourth presidential term in 1960 amid widespread suspicions of vote-rigging. This triggered nationwide protests that forced him to flee to Hawaii, where he died in 1965.

Park, then an army general, came to power in a coup in 1961, which overturned another government elected after Rhee resigned. Park has been credited with industrial policies that drove the country's rapid economic growth during the 1960s and '70s. Critics remember Park as a ruthless dictator who jailed, tortured and executed dissidents. He was assassinated by his spy chief during a late-night drinking session in 1979.

Chun, an army general, and his military cronies drove tanks and troops into the capital of Seoul to seize power in a coup in December 1979 that ended the interim government of acting President Choi Kyu-hah following Park's death. In the summer of 1987, massive pro-democracy demonstrations forced Chun's government to accept a constitutional revision for direct presidential elections. After his tenure ended, Chun spent two years in exile in a remote Buddhist temple amid public calls for his punishment over corruption and human rights abuses.

Roh, Chun's army buddy, won the 1987 election, thanks largely to divided votes among opposition liberal candidates. Both Chun and Roh were arrested in late 1995 on charges of taking bribes from businessmen while in office. They were also indicted on mutiny and treason charges stemming from the 1979 coup and a bloody crackdown on pro-democracy protests that killed hundreds in the southern city of Gwangju in 1980. Chun was initially sentenced to death and Roh to 22 1/2 years in jail in August 1996. South Korea's Supreme Court in April 1997 ruled on a life sentence for Chun and a 12-year prison term for Roh. Both were released by a presidential pardon in December 1997.

Kim, whose election formally ended military rule, initially enjoyed strong support for his ambitious anti-corruption drives. That was before his popularity nosedived amid the late-1990s Asian financial crisis, which toppled some of South Korea's biggest companies and forced his government to accept a $58 billion bailout from the International Monetary Fund. Critics accused him of mismanaging the economy. He left office amid a corruption scandal that saw his son arrested and imprisoned.

A longtime opposition leader and democracy activist, Kim rose to the presidency and held an unprecedented summit with then-North Korean leader Kim Jong Il in 2000. He was awarded the Nobel Peace Prize that year. He left office tainted by corruption scandals involving aides and all three of his sons. Kim was also accused of having the Hyundai business group allegedly pay more than $400 million to North Korea ahead of the inter-Korean summit.

Roh leaped to his death in 2009, a year after his tenure ended, amid allegations that his family members took bribes from a businessman during his presidency. His older brother was sentenced in 2009 to 2 ½ years in prison for influence-peddling, although he was later pardoned. Lawmakers in 2004 had voted to impeach Roh on allegations of incompetence and election law violations, but the Constitutional Court reinstated him two months later, saying the accusations were not serious enough to justify his unseating.

The conservative Lee's victory, which ended a decade of liberal rule, reflected voters' hopes that the former Hyundai CEO would revive a bad economy. His popularity declined over unmet economic promises and policies that critics saw as attacks on freedom of speech. He left office with rock-bottom popularity amid a series of corruption scandals surrounding his family members and key government figures. Prosecutors earlier this month arrested the 76-year-old over various corruption allegations, including suspicions that he took a total of 11 billion won ($10 million) in bribes from his own intelligence agency, companies and others. Prosecutors also allege Lee used a private company as a channel to establish illicit slush funds totaling 35 billion won ($33 million), embezzled official funds and evaded taxes.

Park was formally ousted from office and arrested in March 2017 over allegations that she colluded with a confidante to take tens of millions of dollars from companies in bribes and through extortion and also allowed the friend to manipulate affairs from the shadows. She apologized for putting trust in her friend, Choi Soon-sil, but denied any criminal wrongdoing. She called her trial political revenge and declined to attend sessions.