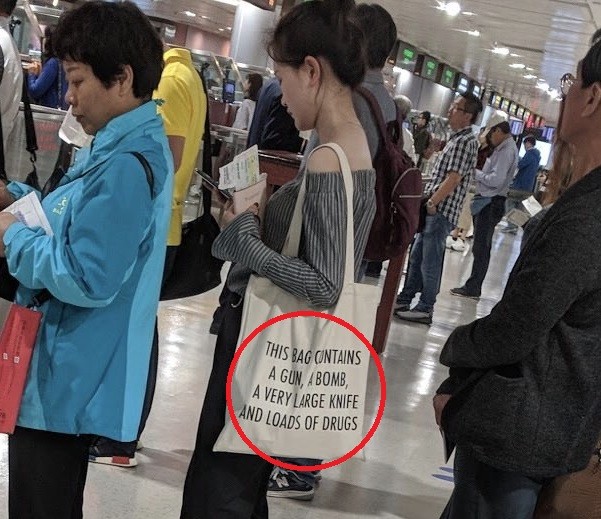 TAIPEI (Taiwan News) -- A netizen in the U.S. shared a hilarious photo on social media showing a Taiwanese woman holding an astonishingly inappropriate bag for air travel at the Taoyuan International Airport which claimed to list a number of strictly banned and dangerous items inside.

This morning (April 3), a user of the social media platform Reddit posted a photograph which he said had been taken by a friend on a recent trip to Taipei and showed a Taiwanese woman waiting in the security line at Taiwan's Taoyuan International Airport carrying a bag which read in all caps "THIS BAG CONTAINS A GUN, A BOMB, A VERY LARGE KNIFE AND LOADS OF DRUGS."

Within seven hours the post has already received 40,000 up votes and nearly 1,000 comments on Reddit. Many comments fixated on the strict standards of the Transportation Security Administration (TSA) screeners in the United States:

"But in the unlikely event that they noticed it, you'd be almost guaranteed to spend hours in a screening room getting questioned and searched. Zero sense of humor or common sense."

"At least it's not something truly heinous like nail clippers."

"Nail clippers are like tactical nukes. I got stopped for them while carrying a pocket knife they said the knife is fine but the clippers have to stay in the luggage or I'm going to get arrested."

"There's a 5 ounce bottle of water in there that's totally going to get her busted."

Others speculated on whether the woman carrying the bag understood the meaning of the English written on her bag:

"I don’t think it’s on purpose, what I got out of it was that English isn’t her first language and she wanted a cool foreign looking bag and got pranked."

"Like when an American gets the Chinese character tattoo, and then translates to Stupid American."

"I think she has a sense of humor and most likely speaks English." 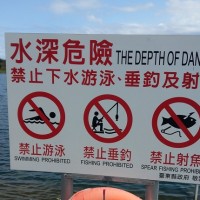 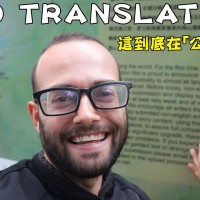 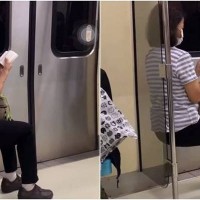