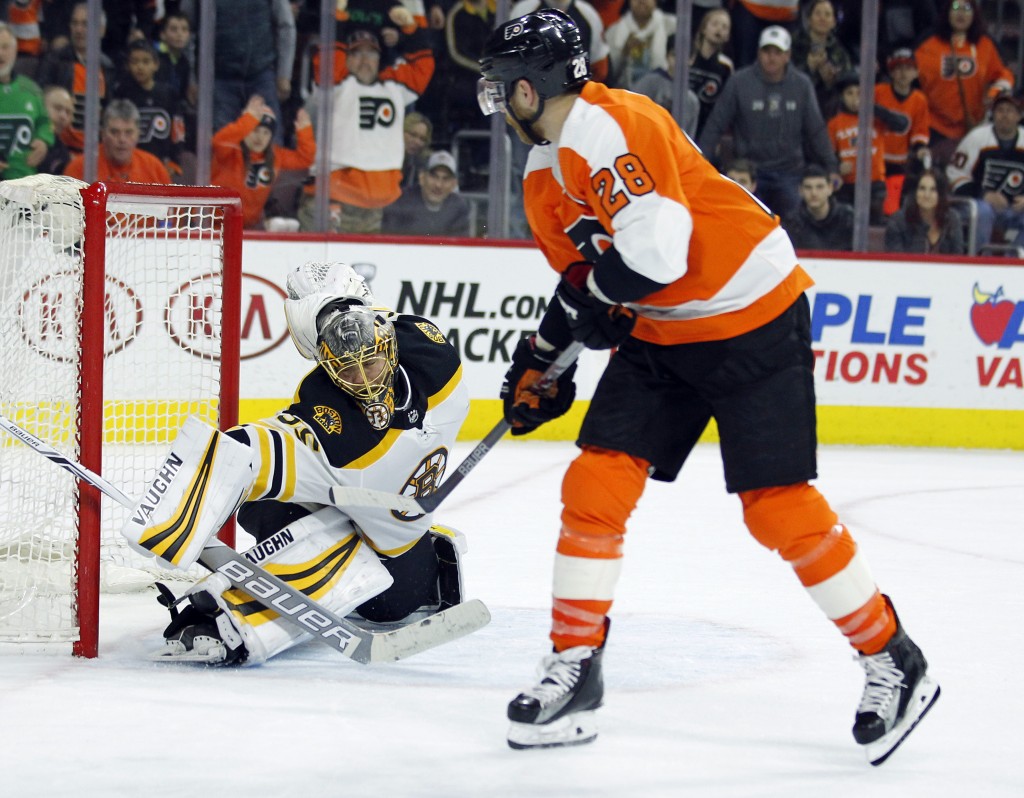 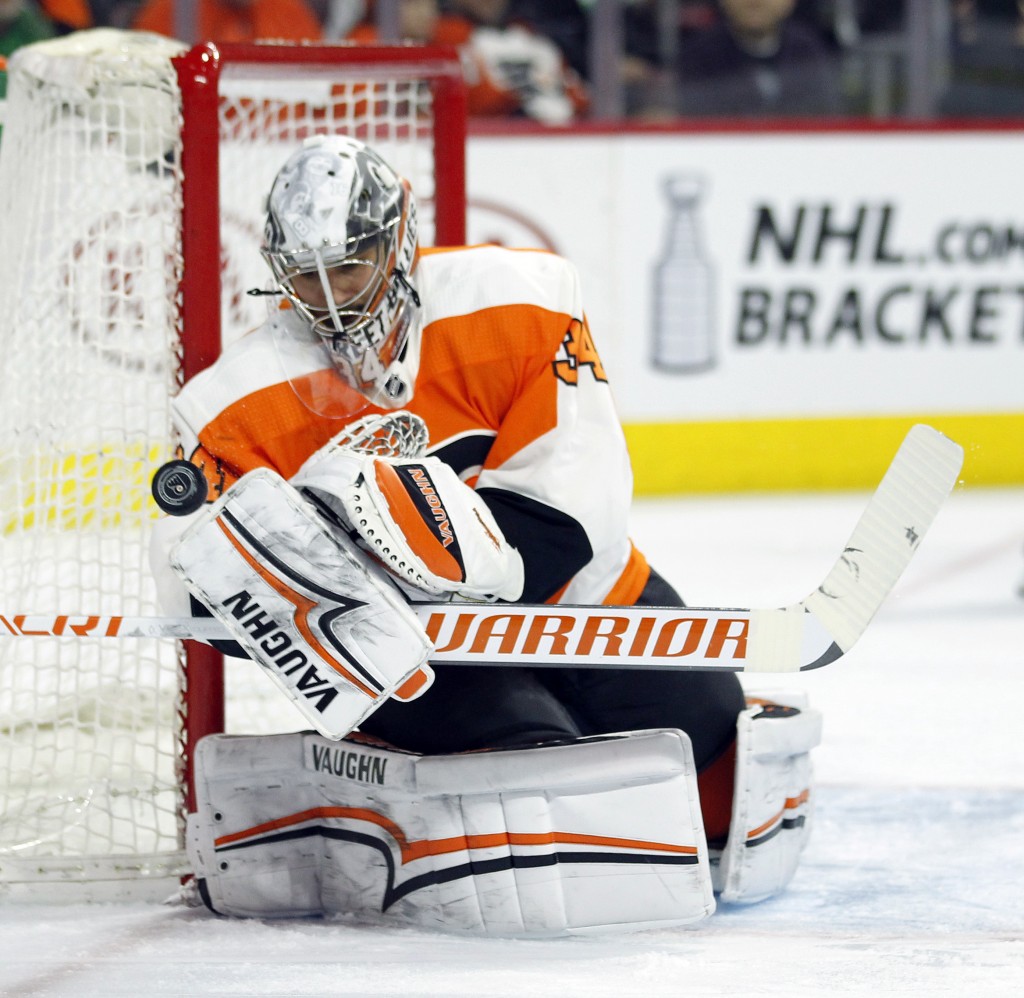 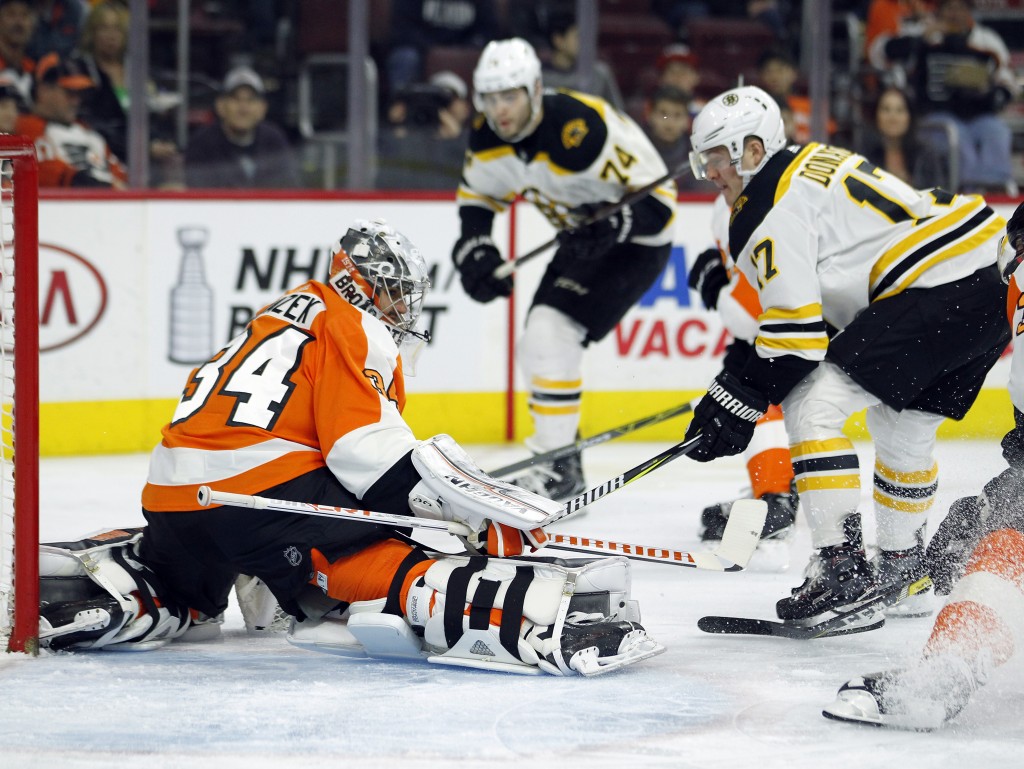 PHILADELPHIA (AP) — Claude Giroux scored his second goal with 1:21 left in overtime and the Philadelphia Flyers recovered from blowing a late lead, beating the Boston Bruins 4-3 Sunday to inch closer to returning to the playoffs after a year absence.

Travis Konecny added a dazzling goal and an assist, Nolan Patrick also scored and Petr Mrazek made 36 saves for the Flyers. Philadelphia who opened an eight-point lead over idle Florida, the last team that can overtake them for the final playoff spot in the Eastern Conference — the Flyers have three games left and the Panthers five.

Patrice Bergeron tied it with 3.8 seconds left in regulation for the Bruins. With the goaltender pulled, Bergeron got his 30th goal on feed from Brad Marchand after the Flyers twice failed to clear the puck.

Noel Acciari and David Pasrnak scored and Anton Khudobin stopped 20 shots for the Bruins, who lost Brandon Carlo and Riley Nash to injuries a day earlier.

The Bruins controlled much of the play but had its eight-game point streak snapped. They remained one-point ahead of Tampa Bay atop the the Atlantic Division. The Lightning played later against Nashville.

A day after Vegas' Willam Karlsson's short-handed, between-the-legs goal was declared by many to be the NHL's top goal this season, Konecny provided competition. His nifty stick work made it 2-0 just 25 seconds into the second period.

Konecny flicked the puck between two defenders along the boards, regained possession in the faceoff circle, went to his backhand to slip past a flailing Bergeron and then quickly switched back to his forehand and beat Khudobin from the slot for his 24th goal.

Moments after Konecny and Giroux botched a two-on-none, the Bruins got within 2-1 with 5:35 left in the second period when Acciari sent a shot over Mrazek's left shoulder.

Patrick's 11th goal at 5:31 of the third made it 3-1. But Oskar Lindblom was called for hooking 28 seconds later and Pastrnak scored his 33rd on the power play to cut the lead in half.

The Bruins welcomed Zdeno Chara back from an upper body injury a day after losing fellow defenseman Carlo to a possible serious leg injury, but couldn't complete a season sweep of Philadelphia.

NOTES: Flyers G Alex Lyon was recalled on an emergency basis to back up Mrazek as Michal Neuvirth (lower body) was unavailable. No. 1 G Brian Elliott (abdominal surgery) practiced Saturday and could return this week. . Bruins D Charlie McAvoy (knee) skated before the game and could return Tuesday. . Marchand, who was named the NHL's second star of March, took a penalty when he cross-checked Andrew MacDonald in the face late in the second period.

Bruins: Tuesday night at Tampa Bay in the second matchup in six days of the East's top two teams.

Flyers: Tuesday night at the New York Islanders in their final road game of the regular season.