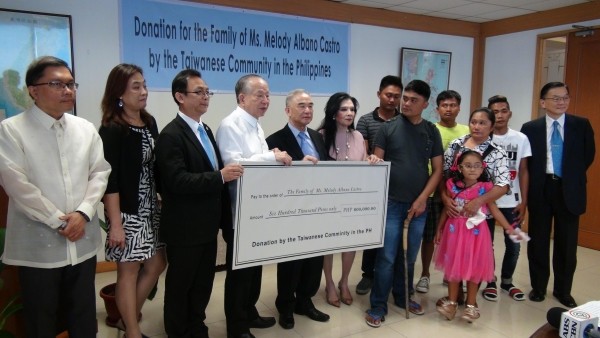 TAIPEI (Taiwan News) -- On behalf of the Taiwanese business community in the Philippines, Taiwan's representative to the country Gary Lin (林松煥) yesterday (March 27) presented a check for PHP600,000 (US$11,000) to the family of Melody Albano Castro, a Filipina caregiver who tragically died in last month's Hualien Earthquake, reported CNA.

Yesterday, meeting with Castro's mother, husband, brother and daughter at a ceremony held at the Taipei Economic and Cultural Office (TECO) in Makati in Metro Manila, Lin presented her mother with a check for PHP600,000 (NT$370,000). TECO also donated supplies to Castro's family, including food, chocolates, children's books, stuffed animals.

Lin reiterated that Taiwan's government is committed to providing foreign workers with a good working and living environment. He said the government uses the principle of treating its foreign workers like citizens and has granted Filipinos visa-free treatment to facilitate visits by relatives and friends of Filipino workers in Taiwan.

Castro was among 17 people who were killed in the magnitude 6.0 Hualien Earthquake which struck the eastern Taiwan county on Feb. 6. She was missing for two days before she was officially confirmed dead on Feb. 8 after her body was found in the rubble of the Yun Men Tsui Ti Building (雲門翠堤).

The 28-year-old woman worked as a caregiver for a Japanese family, including a 63-year-old woman, Sumin Okubo (大久保淑珉), her 68-year-old husband, who is disabled from a stroke, and Okubo's mute younger brother.

Castro's brother Jayson, said that Melody was the main breadwinner for the family and thanked the government and people of Taiwan for the help in this most difficult time for his family. He said that they would always remember and appreciate this kindness. During the ceremony, many of Castro's family members were moved to tears.

Castro's family members had previously received approximately PHP3.2 million from the Taiwan government and insurers, combined with yesterday's donation, a total of PHP3.8 million has been raised for the family. 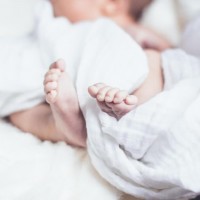