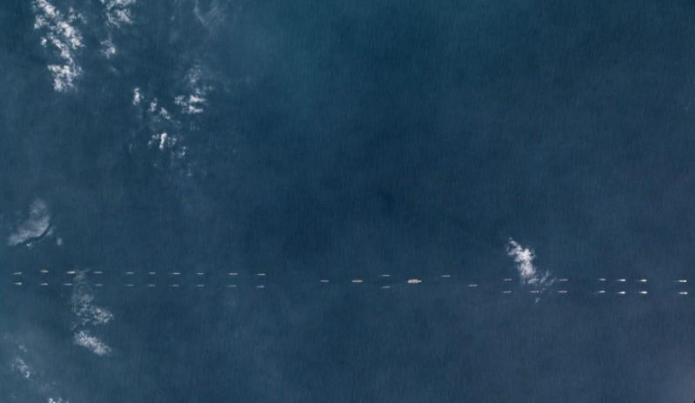 TAIPEI (Taiwan News) – After crossing through the Taiwan Strait last week on March 20-21, the Chinese Aircraft Carrier Liaoning, has reached the South China Sea, where it is has been photographed leading a naval formation of over 40 warships.

The formation was also headed by an H-6 Bomber aircraft and Su-30 fighter jets. Satellite images also reveal several submarines which surfaced near the Liaoning character.

The images have caused alarm among some observers, as the maneuvers are a clear signal that China is willing to deploy a significant amount of its naval resources to further its claims over the territory of the South China Sea.

Reuters quotes a scholar of regional security at Singapore’s S. Rajaratnam School of International Studies, Collin Koh, as stating that it seems “they are keen to show that elements of the South Sea Fleet are able to routinely join up with the Carrier strike group from Dalian in the north.”

The long formation, while impressive, is better suited to propaganda purposes, rather than reflecting any degree of combat readiness or capability of hard naval maneuvering.

The satellite images are the first to show the Liaoning carrier participating in the regular naval exercises of the Chinese fleet in the South China Sea, according to a source quoted by Reuters.

China has not yet commented on how long the naval exercises will last or how long the Liaoning Carrier is expected to remain in the South China Sea.

The Chinese naval exercises are certain to be watched closely by neighboring countries like Vietnam, the Philippines, as well as Taiwan, who all claim sovereignty over the disputed waters.

The United States, which promotes the principle of “Freedom of Navigation” through the important waterways of the South China Sea, is also likely to monitor the location and activities of the large Chinese contingent of warships.