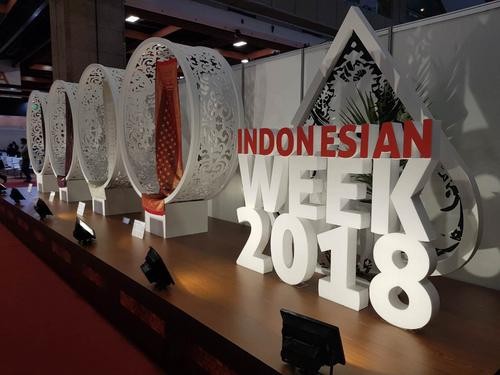 Taipei (CNA) - Indonesia on Sunday concluded its first ever government-organized trade show in Taipei that featured seminars on business topics and opportunities to experience the archipelago nation in various ways during the four-day exhibition.

"Indonesia Week 2018" held at the Taipei World Trade Center starting on March 22 was the largest in recent years and the first organized by the Indonesian Economic and Trade Office to Taipei, Taiwan's National Immigration Agency (NIA) said in a statement Sunday.

The rapid surge in bilateral trade and investment between Taiwan and Indonesia in 2017 was the main factor that led the Indonesian government to take over the show's organization from business associations this year, an NIA official said.

Minister of Economic Affairs Shen Jong-chin (沈榮津) said Indonesia was Taiwan's 14th largest trading partner in 2017, with bilateral trade volume growing 15 percent from a year earlier to about US$8 billion.

The overall investment made by Taiwanese enterprises in Indonesia in 2017 rose 266 percent year-on-year, Shen said at the show's opening ceremony.

Shen said Taiwan sees Indonesia as an important partner and wants to strengthen cooperation with it in shipbuilding, textiles, and machine tools under its overall policy to strengthen ties with Southeast Asian nations.

The Indonesian delegation attended the event was led by Arlinda Imbang Jaya, director general of national export development under Indonesia's Ministry of Trade.

Indonesia's representative to Taiwan, Robert James Bintaryo, was quoted in the NIA statement as saying that he hoped the trade show that showcased art, handicrafts, and foods from his country gave Taiwanese a glimpse of Indonesia's culture and beauty.

A food-theme section at the show sought to do just that.

One of the most prominently featured exhibits there was a booth set up by 63-year-old Iman Yang (楊曼雲) that many visitors praised after tasting her traditional Indonesian dishes, such as turmeric rice, beef curry, sticky rice rolls and Kopi luwak, the NIA said.

An ethnic Chinese from Indonesia who moved to Taiwan 40 years ago and runs Sate House Indonesian Cuisine in Taipei, Yang said the event was also an opportunity to show her friends in Indonesia the friendship Taiwanese people have extended to new immigrants.