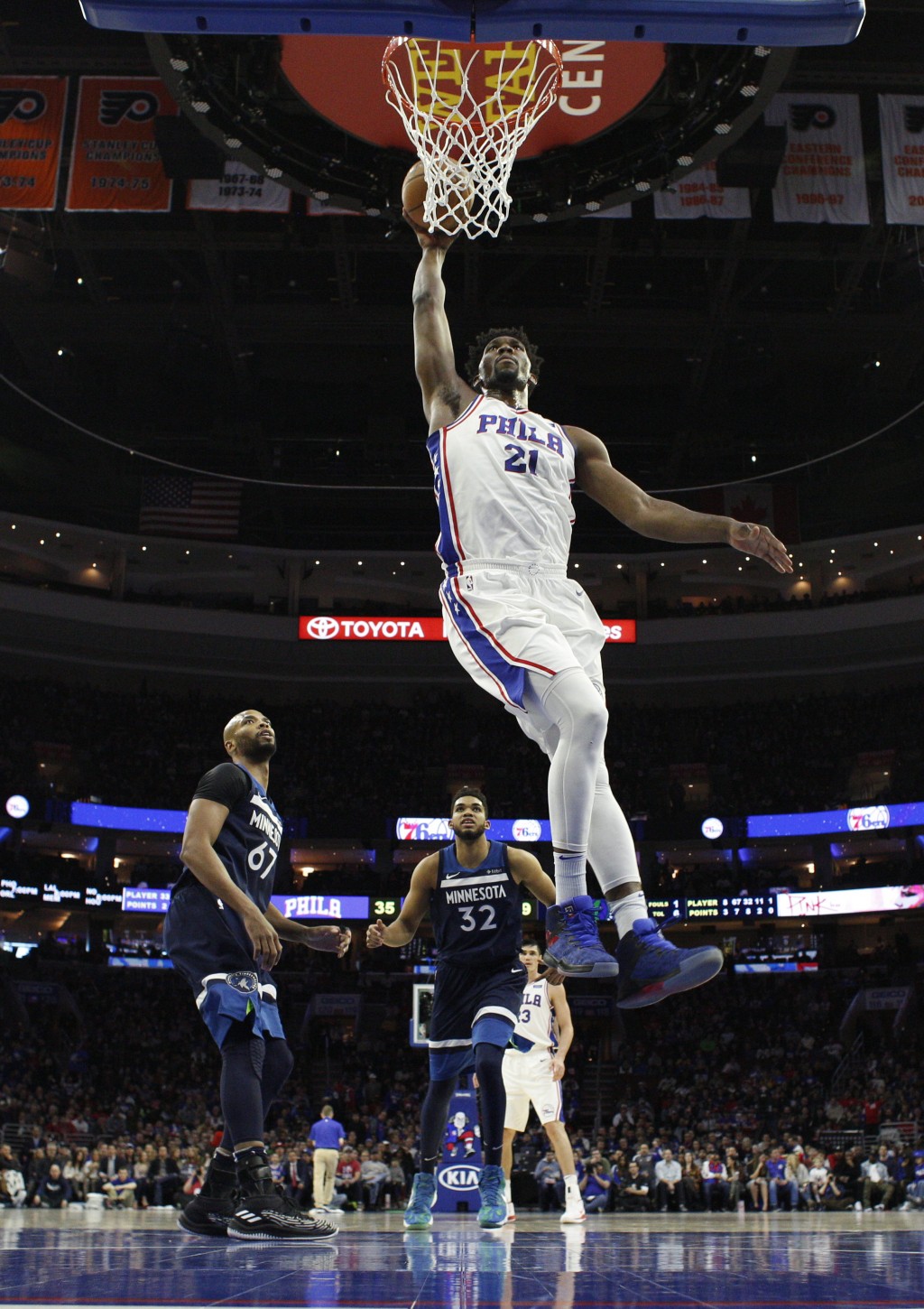 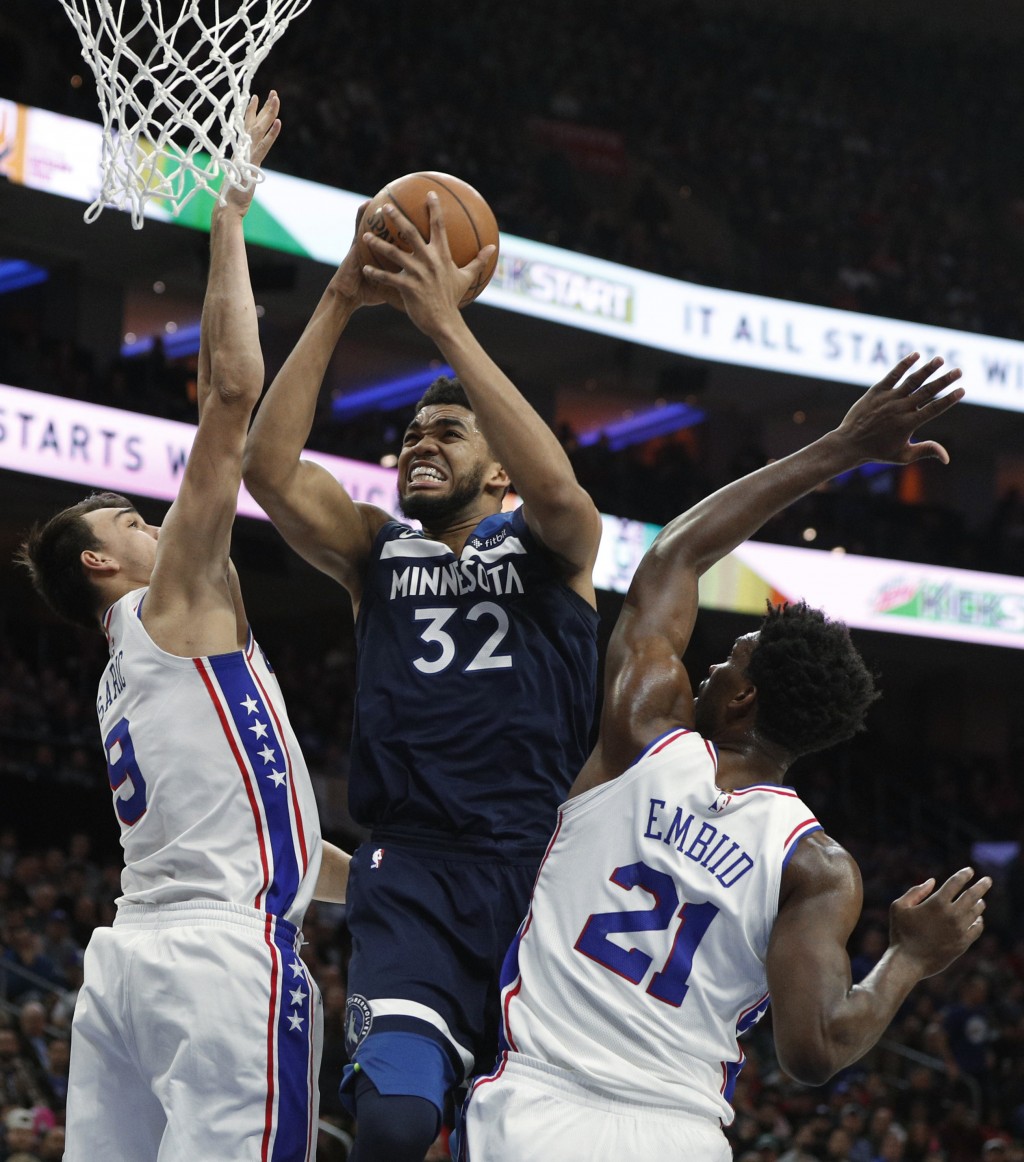 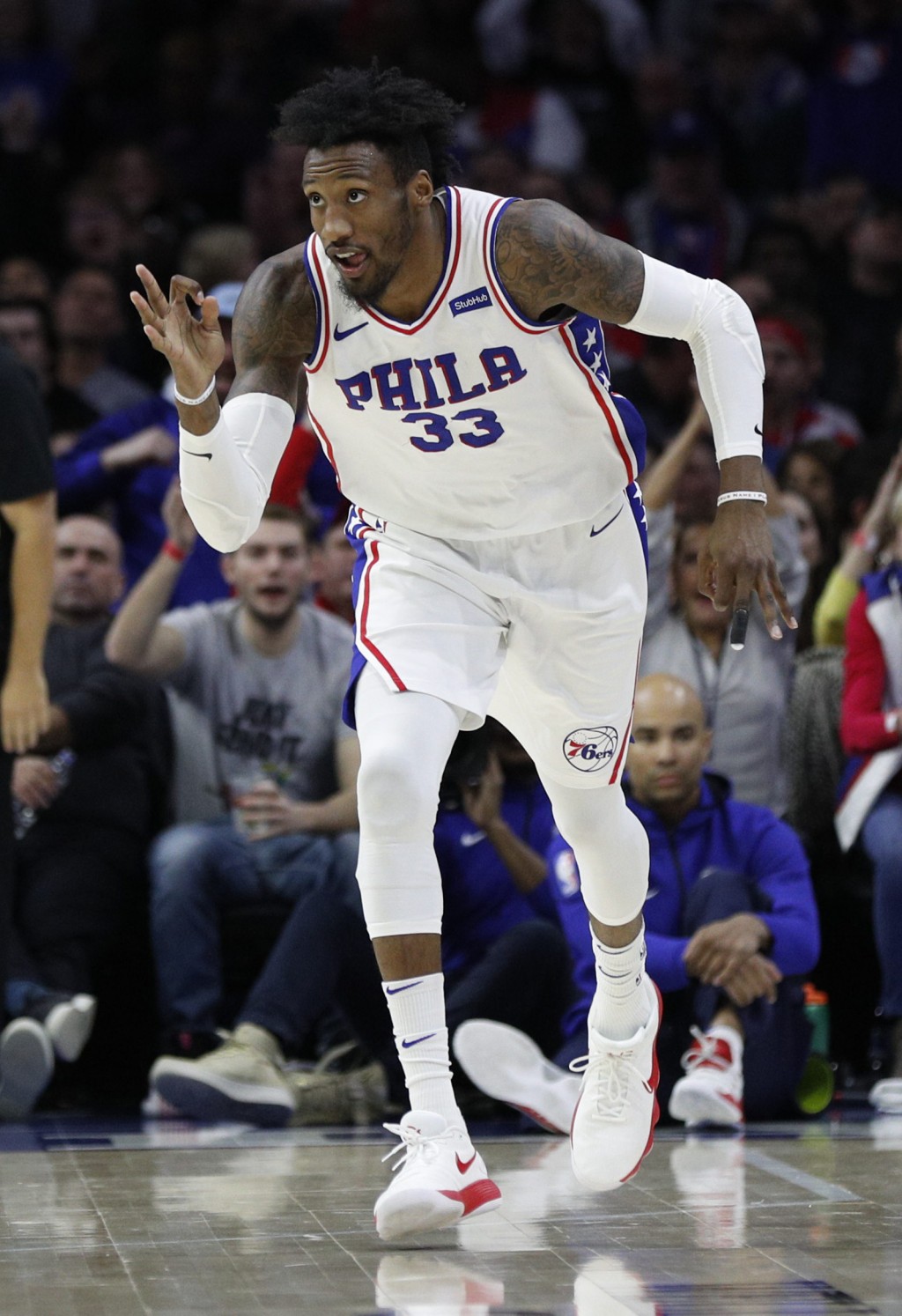 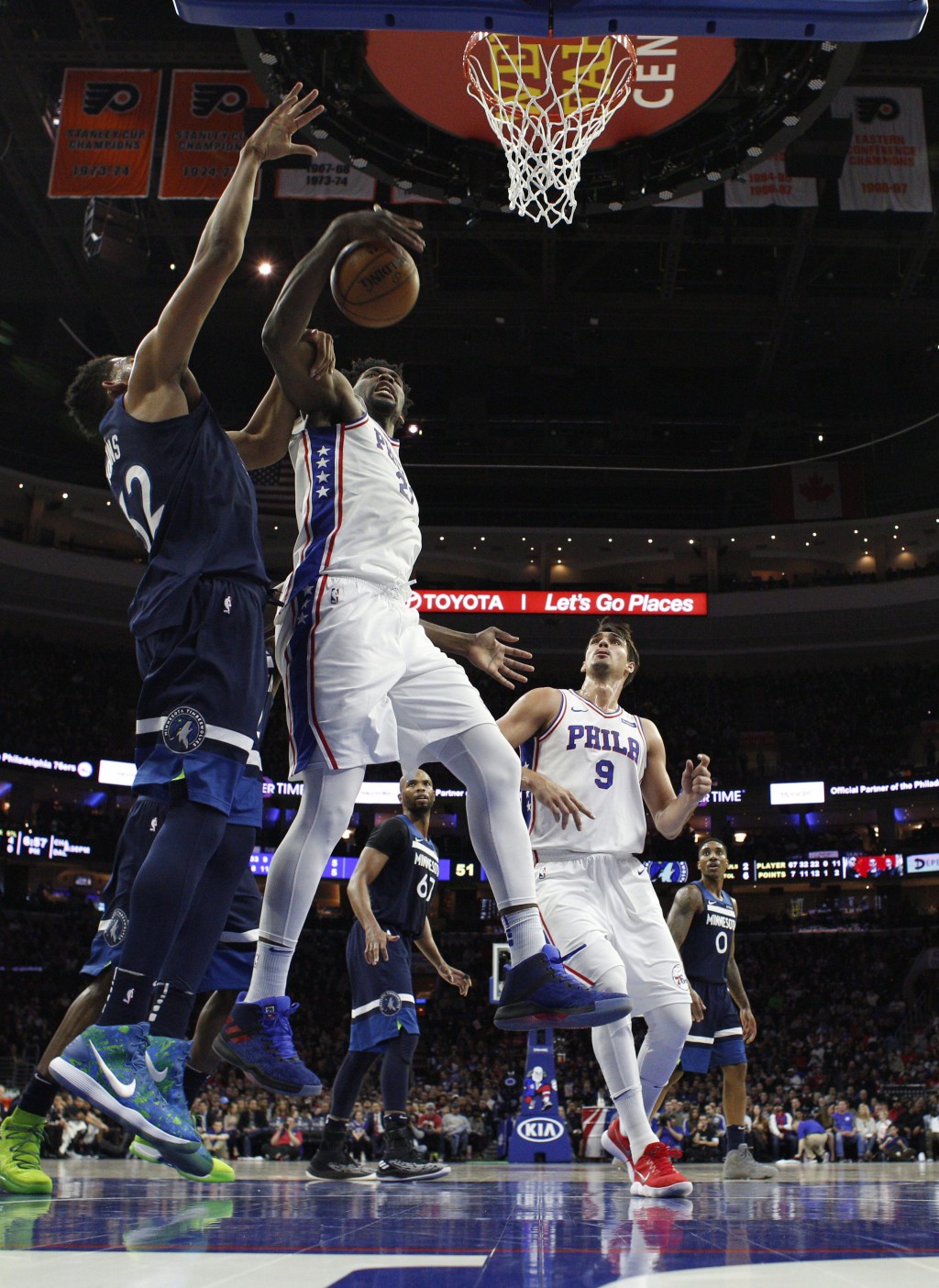 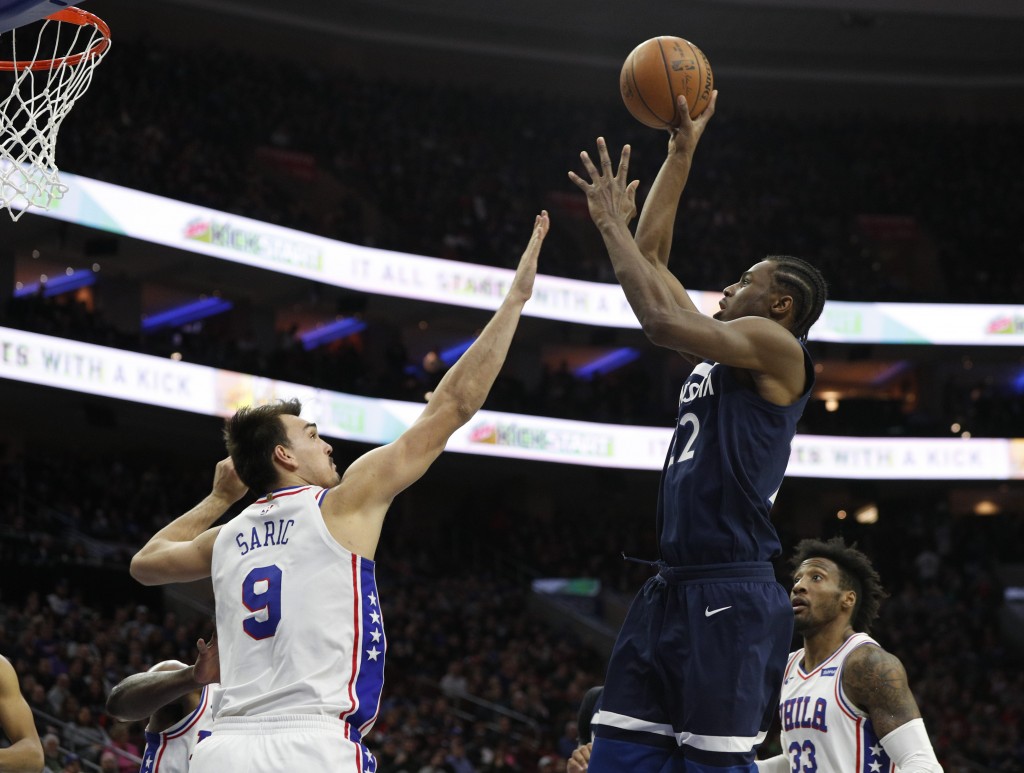 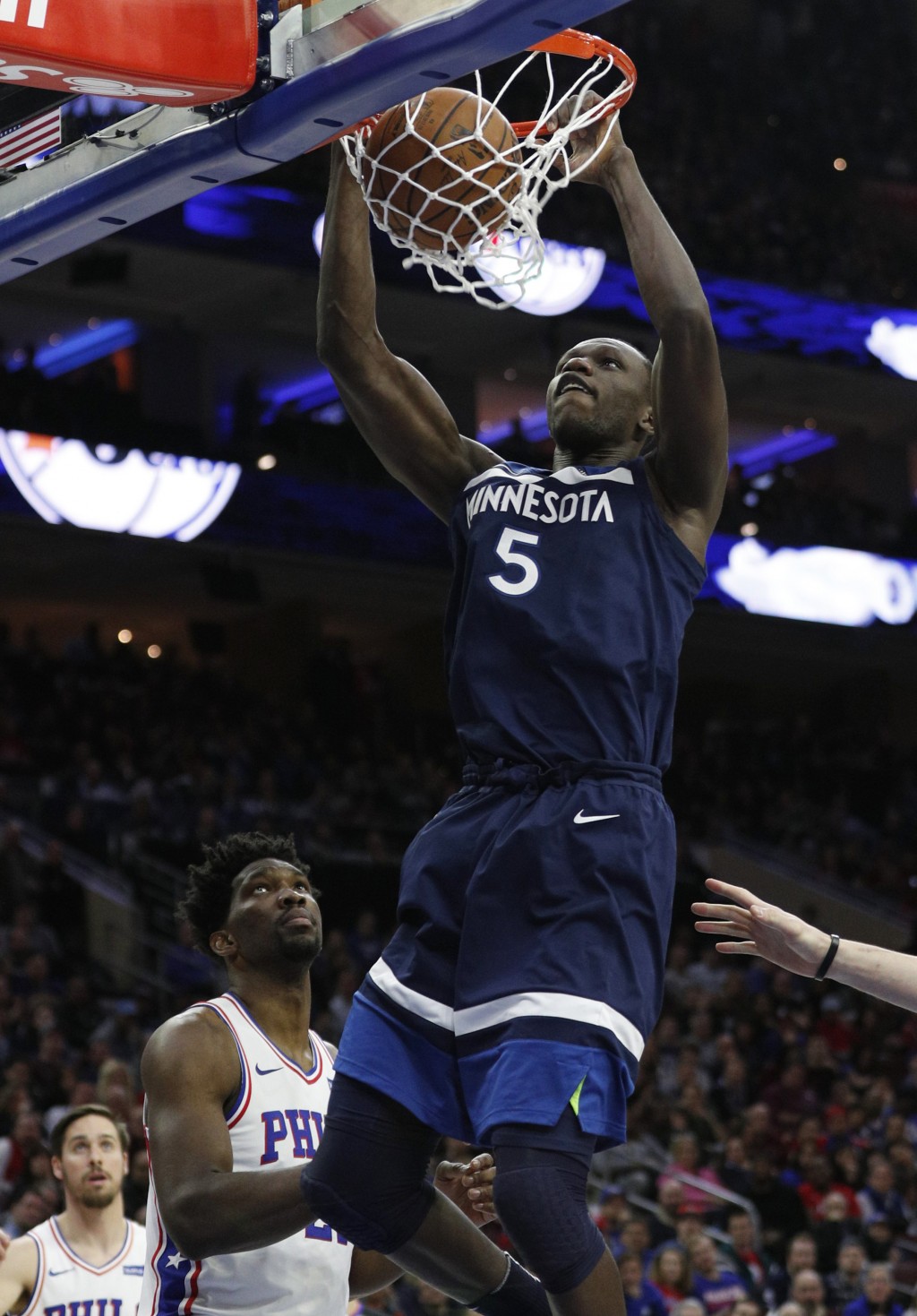 PHILADELPHIA (AP) — Ben Simmons had a triple-double, Joel Embiid dazzled while getting the better of Karl-Anthony Towns, and the Philadelphia 76ers inched closer to their first playoff berth in six years with a 120-108 victory over the Minnesota Timberwolves on Saturday night.

Simmons had 15 points, 12 rebounds and 13 assists for the 10th triple-double of his rookie season. Embiid scored 19 points, and had a left-handed block of Towns, a 3-pointer and a windmill dunk in the Sixers' 20-4 run to start the third quarter.

Dario Saric added 18 points as the Sixers (42-30) won their sixth straight game, ensured a winning season and moved within one win or Detroit loss from their first postseason appearance since 2012.

Andrew Wiggins scored 16 points, and Towns had 15 points and 11 rebounds, but shot just 3 of 15 from the field for Minnesota as its two-game winning streak was snapped.

Simmons secured his triple-double with 3:19 left in the third quarter when he put back his own miss for his 10th point. It was part of a dominating 39-19 period for the Sixers that broke open a close game.

Embiid provided the biggest roar when his acrobatic, breakaway dunk made it 79-56 with 6:39 left. After Minnesota coach Tom Thibodeau called a timeout, Embiid egged on the crowd by raising his arms and screaming.

Coach Brett Brown was forced to reinsert Simmons and Embiid with 2:39 left after the Wolves' reserves cut a 29-point deficit to 111-101.

Thibodeau had the Wolves foul Simmons, a poor free-throw shooter, twice intentionally. But Simmons went 3 of 4 from the line and Minnesota got no closer than nine points.

Minnesota, which entered in seventh place in the Western Conference, shot 38 percent from the field and were 6 of 23 from 3-point range a night after a victory over the Knicks in New York.

Timberwolves: Towns has an NBA-high 61 double-doubles. ... The Wolves are 12-17 against the Eastern Conference and 30-15 against the West. ... G Derrick Rose (right ankle) missed a second straight game.

76ers: Simmons has the most triple-doubles for the franchise since Wilt Chamberlain had 31 in the 1967-68 season. ... The Sixers moved alone into fourth place in the East, one game ahead of third-place Cleveland.

Brown said Sixers rookie Markelle Fultz will return this season only if he declares himself ready after struggling to regain his shooting stroke following a shoulder issue.

"When Markelle Fultz feels like he can go — he really feels good about himself and his health, the shoulder, everything and the medical people support that — he knows that he has a coaching staff and a team that will welcome him in when he says go," Brown said. "He also understands the season is around the corner in terms of the end of the regular season."

Simmons warmed up and was introduced while wearing a blue "March for our Lives" T-shirt as students from around the country demonstrated against gun violence.

Timberwolves: Host Memphis on Monday night in the first of three straight against teams with losing records.