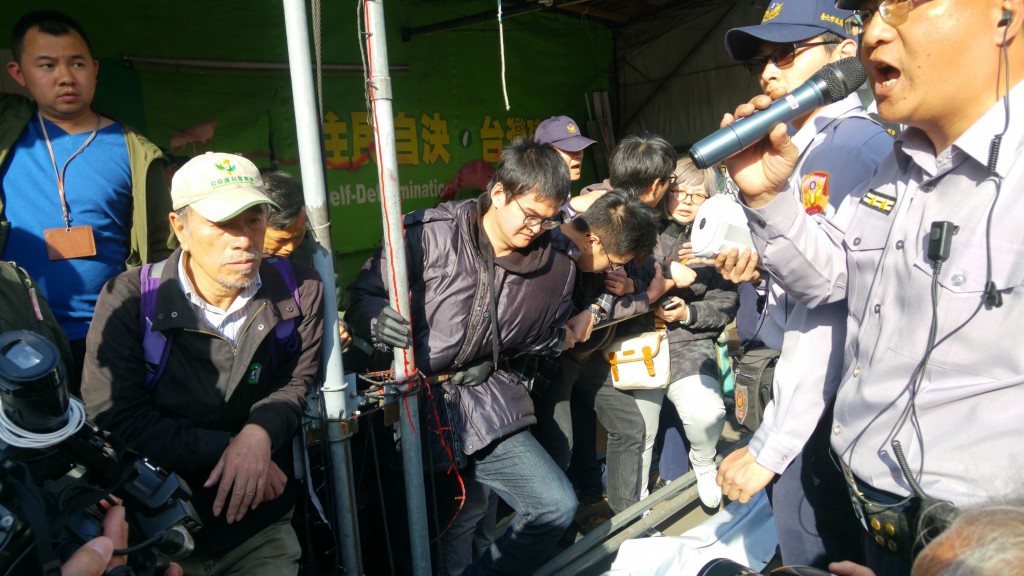 TAIPEI (Taiwan News) – Taipei City police suddenly appeared outside the Legislative Yuan Friday afternoon to remove tents set up by campaigners for a referendum about independence for Taiwan.

The campaigners, led by an organization named the Taiwan Referendum Alliance (公投護台灣聯盟), had been camping at the same location for years, activists said, yet someone had reported them to the authorities as an illegal structure, the Chinese-language Apple Daily reported.

City workers accompanied by police arrived at the site on Jinan Road around 2:40 p.m., and soon quarrels broke out followed by scuffles, reports said.

The clashes lasted until 4:10 p.m., when protesters were led away and the city workers produced their equipment to take down the tents.

Alliance leader and Free Taiwan Party Chairman Tsay Ting-kuei (蔡丁貴), who was present during the incident, wondered why after the group had applied for the right to protest at the site for ten consecutive years, the authorities suddenly launched a crackdown.

Tsay suggested the city government action was a consequence of his announcement this week that he intended to run for mayor of Taipei City in the November 24 elections.

Taiwan Independence activists have grown increasingly frustrated with Taipei City Mayor Ko Wen-je (柯文哲), whom they accuse of being too conciliatory toward China.