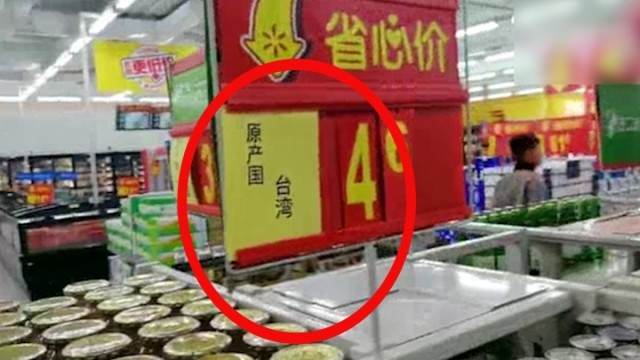 TAIPEI (Taiwan News) -- On Friday (March 19), Chinese netizens got in an uproar over photos and video of sign at a Beijing Walmart which marked a display of products as being produced in the country of Taiwan, rather than a part of China, which the Chinese government has lately been pressuring corporations say.

On Friday, a Chinese user of Weibo (the Chinese version of Twitter) posted a video taken from inside the Dongguan branch of a Walmart in Beijing's Changping District which showed imported products being displayed at a discounted price. Products imported from the UK and South Korea were labeled as "place of origin UK" and "place of origin South Korea," but for a group of products imported from Taiwan, the sign read, "country of origin Taiwan."

After the video surfaced, the Chinese media site Observer Network (观察者网) called an employee at the Beijing Walmart about their decision to label the products as coming from the country of Taiwan, instead of "province" or "area" as is the required practice in China, she indignantly replied, "Its (the product's) country of origin is Taiwan, therefore it must be labeled as Taiwan, it can't be false."

After scathing Chinese criticism was directed at Walmart, the company that same night offered an apology on its official Weibo page. Walmart said that the reason for the mistake was that an individual staff member inadvertently entered the Chinese character for "country" (国) instead of the world for "place" (地), but that the branch had been told to correct the mistake immediately.

Walmart then reiterated that it has "consistently respected and supported China's sovereignty and territorial integrity."

Amid China's witch hunts starting earlier this year with the United States hotel chain Marriott, websites of major multinational corporations listing Taiwan as a separate country were being targeted by Chinese state media and netizens. In response to the threats and punishment imposed by Chinese netizens and authorities, a growing list of corporations have reportedly added "China" after "Taiwan," most recently including the well-known German brand names Mercedes Benz, Bosch, and Lufthansa. Video including original footage inside of Walmart and subsequent interview with Walmart staff: