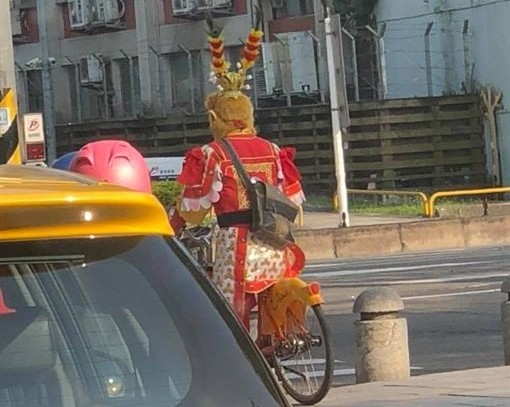 TAIPEI (Taiwan News) -- A netizen on Monday post a photo on Breaking News Commune (爆料公社) of a person dressed like the Monkey King riding a YouBike in Taipei, while other sightings of the colorful character have been reported as well.

The Monkey King (孫悟空, Sun Wukong) is the mischievous protagonist in 16th century the Ming Dynasty novel "Journey to the West," who normally travels around on a cloud. On Monday, a person dressed in a Monkey King costume was spotted riding a rental YouBike on Taipei's Civic Boulevard.

Many netizens were amused by the simian cyclist:

"His somersaulting cloud was probably towed away for being parked in a no-parking zone..."

"Lost it all in the stock market, had to sell it."

"The Monkey King also has an EasyCard?"

"The somersaulting cloud had the day off, didn't go to work."

"Monkey King said: It's not because of 'one fixed day off and one flexible rest day' (一例一休)!"

"He can even use an EasyCard, he's really keeping pace with the times."

"I was just waiting with him for the bus at the Ximen MRT station, he ended up taking the 307 Bus."

A man surnamed Hung (洪) claimed on Facebook to be the one riding a YouBike while dressed as the Monkey King, but he denied he was the same person spotted in other locales. Another sighting of Monkey King with a scooter and attending a cosplay event. (Photo from 爆料公社) Still another Monkey King spotted with shades. (Photo from 爆料公社)