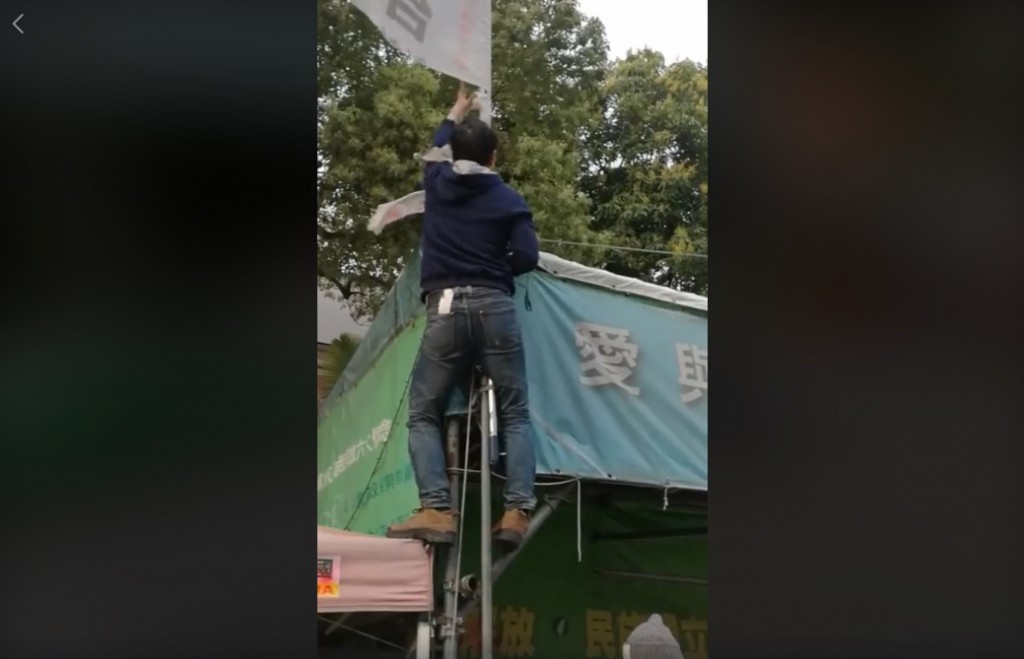 TAIPEI (Taiwan News) -- At around 5 p.m. yesterday (March 6), about 10 members of the Kuomintang Youth League (中國國民黨青年團) shot a live Facebook video of themselves ransacking and splashing red paint on a Taiwan independence camp set up in front of the Legislative Yuan.

In the video, which has 127,000 views and over 2,400 comments, members of the Kuomingtang (KMT) youth group can be seen knocking over tables, hurling chairs, tearing down banners, and splashing red paint on independence slogans at a camp set up by Taiwan independence advocates calling for a referendum. At one point a member holds up a sign which reads "I declare war on you" (戰帖), while another holds up a sign reading "The Republic of China's constitution does not allow its land to be divided."

Towards the end of the video, the sound of police sirens rapidly drawing nearer can be heard and the vandals start to scurry away. Police arrived on the scene and arrested four Kuomingtang Youth League members, reported Liberty Times. (Screenshot of video uploaded by @ROC.Blue.Power)

As Free Taiwan Party Chairman Tsay Ting-kuei (蔡丁貴) did not opt to press charges, police arrested the four for violating the Social Order Maintenance Act. Police are investigating their motive and are also trying to track down their accomplices.

Taiwan independence advocates initially tried to stop the youth league members from destroying their camp, but were unable to, and therefore alerted the police. (Screenshot of video uploaded by @ROC.Blue.Power)

This is the second time that the camp advocating a referendum on Taiwan independence has been attacked. A few days before, anti pension reform groups protesting outside the Legislative Yuan also rushed into the camp and tore down banners, ransacked the tables and tried to tear down the tents before police intervened and stopped them, reported Ettoday.