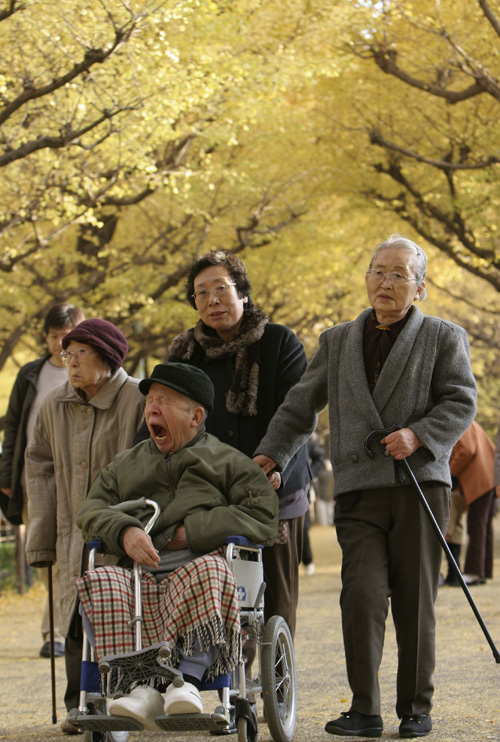 Want to set up a sushi bar at your funeral? Talk to John Kamm, an American entrepreneur aiming for a slice of Japan's US$6.8 billion funeral industry.
Kamm helps people set up their own burials for a fee. Most choose simple Buddhist ceremonies, but some order food buffets for mourners and pick their own karaoke music for the funeral service.
"There are a lot more people dying but there are a lot more companies springing up," said Kamm, 35. "They are keeping up with the aging population growth.
The funeral industry is one of many sectors that envisages big profits in catering to the elderly in the world's grayest country.
Some 25 million people out of Japan's 127 million population are now 65 or older amid increasing life expectancies and record-low birth rates. Around 36 percent - or some 40 million people - will be aged 65 or over in 2050.
By 2050, the trend will be even more pronounced: Japan expects to have the world's largest proportion of pensioners - around 36 percent compared to 21 percent in the U.S. and 31 percent in Germany.
But getting Japan's elderly to spend their yen is the main challenge to win a share of this potentially lucrative market. The older generation relies on fixed pension incomes and earns a third less than the average household, so it tends to be pickier and more discerning in its purchases than youngsters. "Cash flow definitely decreases for the older generation. So from a business's point of view, the key is how much they can make consumers use their savings," said Junya Morizane, an economist at Fukoku Mutual Life.
"To do that, businesses have to offer extremely attractive products and services that perfectly fit their needs."
Even baby goods makers like Pigeon Corp. are venturing into the elderly care business. Pigeon - which makes diapers for incontinent adults - aims to increase sales to the elderly by a quarter by 2008.
Super-aging society
Convenience store operators Seven & I Holdings and Lawson Inc. are targeting Japanese consumers like Masae Sasaki, a 76-year-old widow who lives alone in the countryside about 100 kilometers northeast of Tokyo.
The stores have started to take orders and deliver groceries to pensioners, who tend not to own cars.
"I can't drive, so if (delivery) services were available, it would be useful, especially when I need something heavy like rice or soy sauce," Sasaki said.
Like most pensioners, though, Sasaki wants the service at a bargain price.
"It has to offer a similar selection of products to supermarkets at similar prices," Sasaki said. "Otherwise, I would probably not use it."
The Miyanokawa shopping district association in Saitama prefecture, north of Tokyo, represents a group of neighborhood retailers who are adapting to the demographic shift.
The association launched a service in August to deliver goods or services, from hardware to haircuts, from its 120 member shops to customers' homes for a fee.
The group plans eventually to add a service to check up on elderly singles and provide them with companionship, since fewer people live with their aging family members than in the past.
"There will be more and more people who won't be able to drive. Unquestionably, needs are there," said Kenichi Shimada, the head of the group.
Changing styles
Japan's graying population is forcing many industries to re-examine the way they do business.
Convenience store Lawson Inc. has refurbished some of its stores to create sitting rooms and massage chairs for elderly people to meet and changed its range so that it offers more products for the elderly, such as hair dye.
These stores are ringing up more sales than regular outlets, sometimes 50 percent higher, the company said.
Home nursing is becoming a booming industry, growing by 19 percent in 2005. Travel agencies are targeting active seniors with major player JTB Corp. launching a subsidiary to offer package tours to the 50-plus set.
On the funeral industry front, photo processing service provider Asukanet sells digitally modified portraits or short movies of the deceased.
Another company, unlisted I-Can, lets customers visit relatives' graves via the Internet where they can place "virtual" flowers, light candles or even clean the tombstone.
Kamm, for his part, aims to be a leader by offering what he calls "pre-need" services - pre-arranged and prepaid funerals.
"We know we're going to make money," said Kamm, who predicts that four or five big funeral companies will eventually dominate the market in Japan.
Kamm has at least one happy customer: Takeshi Sato, 57, who signed up for a Buddhist ceremony.
"This way I can have a say in my funeral," Sato said.