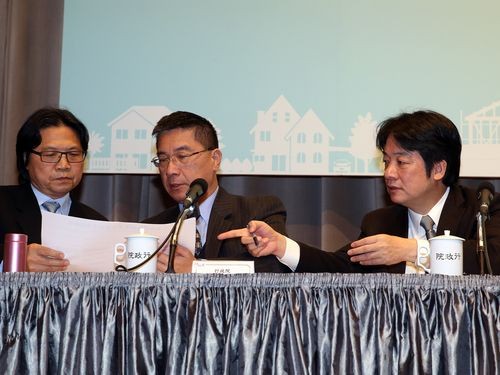 Taipei, Feb. 26 (CNA) Premier Lai Ching-te (賴清德) said Monday that the government plans to invest NT$6.078 billion (US$208.02 million) over four years to improve the safety of old buildings in the wake of several earthquakes that have hit Taiwan in the past two decades.

Lai said at a press conference that the Ministry of the Interior has developed programs to reduce the earthquake risk to existing unreinforced old buildings.

These include quick screening of buildings, earthquake resistance assessments, reconstruction and retrofitting of old buildings to improve their safety, and providing financial subsidies.

The ministry will provide subsidies for quick screening of old, private residential buildings and earmark those at risk of collapse in a major earthquake for seismic hazard assessments, according to Yeh.

Quick screening of such old buildings with 12 floors or more, numbered at about 9,300, was completed last year, he said.

Meanwhile, the government will provide NT$6,000-NT$8,000 in subsidies to potentially earthquake-prone buildings for preliminary seismic hazard assessments. An estimated 34,000 buildings are expected to receive the assessments within four years.

The government will provide up to NT$600,000 for detailed seismic hazard assessments, with about 500 buildings likely to be assessed in four years.

Taiwan is an earthquake-prone country, which has faced several earthquakes of high magnitude in the past, including a magnitude 6 earthquake that hit Hualien on Taiwan's east coast Feb. 6, killing 17 people and injuring 270.

On Feb. 6, 2016, a magnitude 6.4 earthquake hit southern Taiwan, causing the collapse of several buildings in Tainan, leaving 117 dead and 551 injured.

On Sept. 21, 1999, the central part of Taiwan was struck by an earthquake that registered 7.3 on the Richter scale, one of the most devastating natural disasters to happen on the island last century, which killed 2,400 people and injured some 10,000.