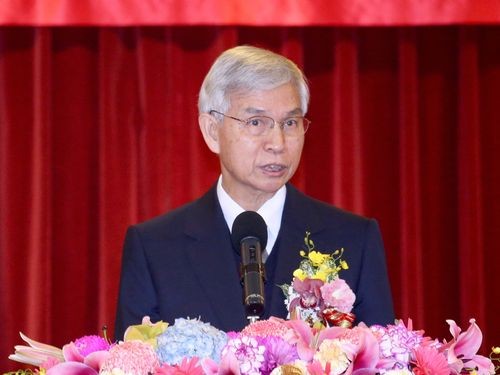 The new governor of Taiwan's central bank, Yang Chin-long (楊金龍), said Monday at his swearing in ceremony that the bank's main challenge at the moment is finding ways to maintain stable interest rates and keep the local currency value steady.

As the rapid movement of funds through the global markets continues, the big issue remains how to keep the Taiwan dollar and interest rates stable, said Yang, who took over from the long-serving Perng Fai-nan (彭淮南).

Yang, who was Perng's deputy, said he also needs to keep a close eye on the impact of a fast-developing financial technology on the money market.

In his speech at the ceremony, Yang paid tribute to Perng, who has retired after almost 20 years at the helm of Taiwan's central bank.

During Perng tenure, he steered the central bank through the global financial crisis and implemented effective monetary policy, said Yang, who was deputy governor of the bank since March 2008.

Prior to his appointment as deputy governor, Yang also worked in the banking, foreign exchange and economic research departments of the local central bank and headed its London office from 1994 to 1997.

On Feb. 1, he was appointed by President Tsai Ing-wen (蔡英文) to take over from Perng, who retired on Sunday but will remain as an advisor to the central bank.

During his 20-year period of service, Perng was listed 14 times among the world's top-tier central bankers by New York-based Global Finance magazine, receiving a grade "A" for 13 consecutive years.

The appointment of his successor has been greeted with optimism in the local business sector, with Lai Cheng-i (賴正鎰), chairman of the General Chamber of Commerce, saying that the stock market is not likely to suffer any fluctuations as a result of Yang taking office as central bank governor.

Lin Por-fong (林伯豐), chairman of the Chinese National Association of Industry and Commerce, said he hopes the central bank will not allow the Taiwan dollar to appreciate too much against the U.S. dollar as Taiwan's export-oriented economy is reliant on a cheap local currency to maintain its global competitiveness.

Meanwhile, according to Lin Chien-fu (林建甫), president of the Taiwan Institute of Economic Research, the local central bank is likely to raise interest rates in the second half of the year if the U.S. Federal Reserve speeds up its rate hike cycle amid stronger-than-expected economic growth.