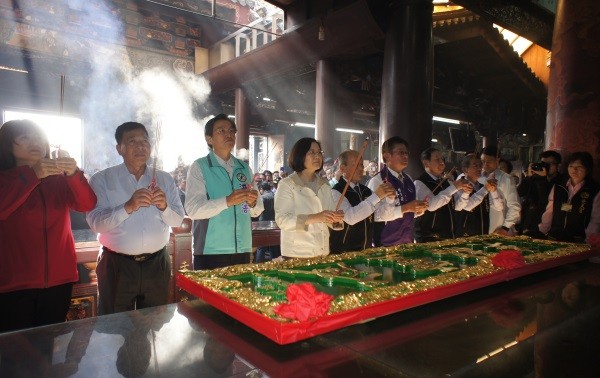 MANILA (Taiwan News) -- On the eve of Lunar New Year, Feb. 15, Taiwanese President Tsai Ing-wen (蔡英文) delivered a special message for the people of Taiwan from the Rainbow Hall, Presidential Office Building. Her message, which was uploaded on YouTube, focused on more blessings for the country in the year ahead and resiliency despite the tremendous earthquake that struck Hualien on Feb. 6.

The New Year’s message delivered must serve as a reminder for every Taiwanese person to act and contribute for the betterment of the country. However, as the saying goes "Hope for the best, but prepare for the worst," when it comes to the future for Taiwan in 2018, especially in political scene.

In her address, President Tsai urged fellow Taiwanese citizens to be more vigilant in their efforts towards crisis preparation and response, since Taiwan is located in an active fault zone.

In addition, the Taiwanese leader said that aside from assistance in reconstruction and recovery of Hualien, the government is committed to making an inventory of buildings that are at risk once an earthquake strikes. She also said that while earthquakes are inevitable, the government can decisively establish a thorough and effective disaster preparedness program which aims to minimize the damage brought by earthquake.

It can be recalled that on Feb. 6, a magnitude 6.4 earthquake struck Hualien, and one of the casualties in the deadly quake was a Filipina caregiver named Melody Albano Castro, as identified by the Philippine newspaper the Manila Bulletin. The Taiwanese government provided compensation to the family of Castro worth Php 2.8 million (US$53,000).

And why not? Taiwan, along with other countries such as Japan, Philippines, belong to Southeast Asia region are situated on the Pacific Ocean's so-called “Pacific Ring of Fire,” where natural disasters such as volcanic eruptions and earthquakes are all too frequent.

Indeed, the latest deadly quake in Taiwan must serve as a wake-up call for every country to create a comprehensive master plan that focuses on disaster mitigation, since natural calamities such as earthquakes cannot be avoided. Cooperation among all nations is needed to ensure that such a master plan could stay on the right track.

President Tsai’s message of hope, resiliency and cooperation reminds me of what happened here in the Philippines when a super typhoon named Haiyan (Yolanda in the Philippines) devastated Tacloban City in Leyte Province on November 8, 2013. Despite the criticism hurled at the administration of former Philippine President Benigno Aquino III due to its slow and indecisive response, assistance from international community poured forward, and the spirit of unity, cooperation and goodwill among the people of Tacloban was awakened.

Aside from the earthquake which struck Hualien, Tsai said in her message that the Taiwanese economy has exceeded expectations and restored people’s confidence throughout society. It was reported that Taiwan’s total export value reached the second highest mark in history in 2017, and unemployment has dropped to a 17-year low.

A few days ago, the Taiwan stock market closed at 10,000, which is only the second time it has done so high in its entire history. Tsai also said that the government is working hard with the people for the reorientation of the direction of Taiwan’s economy by promoting its“five plus two” program for industrial innovation, which will yield comprehensive benefits to Taiwan’s economy that will strengthen the country’s industrial infrastructure and stimulate domestic investments.

For this year, Tsai said that as long as industrial competitiveness and economic activity continues apace, the government will be able to introduce targeted measures to address and solve the problem of stagnant wages.

One of the most important events in Taiwanese politics to watch out for is the upcoming local elections this year.

As reported by Matthew Strong of Taiwan News, Tainan City mayoral contender Lee Chun-yi warned that China might try to influence the outcome of the upcoming local election to be held on Nov. 24 by funding certain candidates.

Another story which was reported by David Spencer also at Taiwan News stated that it has been revealed that China’s Taiwan Affairs Office, has been holding a conference to plan ways to interfere in the upcoming local elections in Taiwan this year. The Taiwan Affairs Office is an organization from the Chinese Communist Party which backs efforts to destabilize or overthrow the democratically elected Taiwanese government.

In addition, the writer noted that the open hostility of the Communist regime in China towards current Tsai administration is clear, with its ultimate goal being the heavy defeat of Tsai’s Democratic Progressive Party in these elections.

As far as the government is concerned, the upcoming local elections for new local officials such as city mayors, county magistrates, city and county council members and others will serve as a test to check the stability and popularity of the national government, which is now headed by Tsai.

Also, the election for national and local positions is very important because every citizen has the right to choose his/her favored candidate to administer Taiwan through the ballot.

However, China’s interference in Taiwan’s election is no-sweat of their back due to their extensive financial, political and technological resources, thus endangering the integrity of the electoral process.

Since the possibility of interference by the Chinese Communist Party in Taiwan’s elections is real, it should serve as a wake-up call for the people to be more united, critical and vigilant in asserting and ensuring that the electoral process is meant to address issues in Taiwan and not the other way around.

More issues and events await Taiwan this 2018 that will shape nation’s history and future. Some of the questions that need answers include: Will the Tsai administration survive the pressure from China?

Will there be political stability? Will lawmakers in Taiwan exercise discipline, especially in restraining their tempers while discussing issues that need resolution? And so much more.

*Christopher Rivera is a former campus journalist and now a private school teacher from the Philippines.