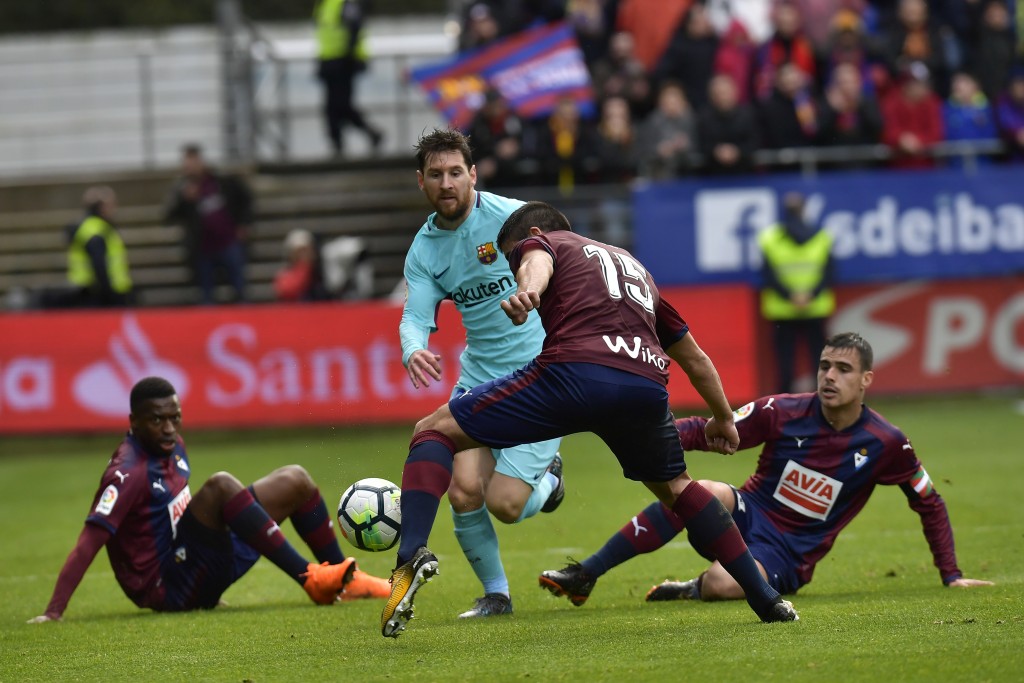 LONDON (AP) — As unlikely as it sounds, Lionel Messi is still waiting to score his first goal against Chelsea after drawing a blank in eight previous Champions League matches.

The five-time World Player of the Year is likely to get another chance to break his duck this week and Chelsea manager Antonio Conte believes the past will count for little when Barcelona visits Stamford Bridge on Tuesday.

"I hope we maintain this tradition but we are speaking about a fantastic player," Conte said ahead of the last-16, first-leg Champions League game. "The most important thing is the present.

"We must have great respect but at the same time we must be excited to play this type of game and take on this type of challenge. It won't be easy because we know very well this player, we are talking about one of the best in the world."

The teams have produced some epic games in the past although they have not met in the Champions League since Chelsea pulled off a remarkable backs-to-the-wall semifinal victory over Barcelona on the way to winning the trophy in 2012.

Messi missed a penalty in the second leg at the Nou Camp as the London club overcame the first-half dismissal of captain John Terry, and a 2-0 deficit, to draw the game 2-2 and secure an unforgettable 3-2 aggregate win.

Two weeks ago, the prospect of a Chelsea win over Barca would have been unthinkable after Conte's men had slumped to successive defeats by two of the Premier League's lesser lights.

The London club was still smarting from a 3-0 home loss against Bournemouth when it traveled to Watford and succumbed to an embarrassing 4-1 reverse.

Chelsea has got back on track since then, though, easing past West Bromwich Albion 3-0 in the league last Monday before swatting aside second-tier Hull 4-0 in the FA Cup four days later.

Conte has several selection dilemmas. He must choose between captain Gary Cahill and Antonio Rudiger for a place at the back, and between Alvaro Morata and Olivier Giroud up front.

Cesc Fabregas will also be desperate to play against his former team but may have to settle for a spot on the bench.

Barca has lost only once in 38 matches this season since falling in the Spanish Super Cup to Real Madrid in August. It has a seven-point lead at the top of La Liga and has reached the final of the Copa del Rey.

Messi is having another stellar campaign, scoring 27 times in all competitions, and he helped set up two goals in Saturday's 2-0 win at Eibar.

Philippe Coutinho is ineligible for Barca following his move from Liverpool.

Here's a closer look at the week's other games:

Bayern coach Jupp Heynckes must decide which of his in-form attacking midfielders should play.

Arjen Robben shone for the runaway Bundesliga leader in Saturday's 2-1 win at Wolfsburg but Thomas Mueller could take his place on the right, with James Rodriguez coming in to partner Arturo Vidal, having been rested at the weekend.

The victory means Heynckes has won 21 out of 22 games since returning as coach.

Besiktas surprised many by advancing from a group featuring Porto, Monaco and Leipzig.

Asked whether Pogba had a serious problem, Mourinho replied: "I don't know and, honestly, I don't care."

United is a distant second in the Premier League, 16 points behind Manchester City. Mourinho's team has been inconsistent in recent weeks, winning two and losing two of its last four games in all competitions.

Sevilla, fifth in its domestic league, has won three matches in a row and is hoping to have Ever Banega and Luis Muriel back after injury.

After a difficult run domestically, Roma has turned things around with three straight wins.

Turkish winger Cengiz Under scored his fourth goal in three matches to help the team to a 2-0 victory at Udinese on Saturday that left Roma in third place, two points ahead of Inter Milan.

"We've got to make the most of the fact they've had a winter break and might not be match fit," Roma coach Eusebio Di Francesco said of Ukraine's Shakhtar.

Manchester City cruised to a 4-0 win at Basel while Tottenham retrieved an early two-goal deficit to draw 2-2 at Juventus.

Andrew Dampf in Rome, Ciaran Fahey in Berlin and Joe Wilson in Madrid contributed to this report.