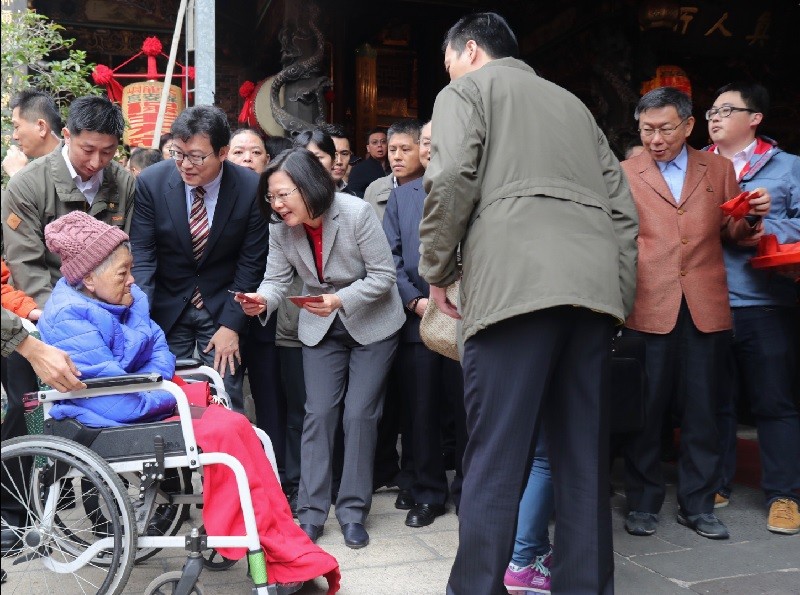 TAIPEI (Taiwan News) – President Tsai Ing-wen (蔡英文) handed out red envelopes to the public at the Baoan Temple in Taipei City on the second day of the Year of the Dog, but observers were watching for local political implications.

Also present at the event Saturday were the capital’s mayor, independent Ko Wen-je (柯文哲), and ruling Democratic Progressive Party (DPP) lawmaker Yao Wen-chih (姚文智), who has announced his intention to run for mayor against Ko in the November 24 election.

In 2014, Ko won a landslide victory with the support of the DPP, which Tsai chairs, but this year, the party has not yet announced whether it will back Ko again or nominate a candidate of its own.

At the temple, the president shook the hands of both men, but the interaction between Ko and Yao was cool, the Liberty Times reported.

The mayor also handed out red envelopes to the public, but said they had been prepared for him by the temple. Yao did not give anything, since as he was a member of the ruling camp, the president was the one to present red envelopes, the Liberty Times quoted him as saying.

The newspaper also noted that DPP members of the Taipei City Council chose to stand by Yao as he was being interviewed, but were nowhere in sight when Ko appeared before the microphones.

As some in the crowd shouted slogans supporting Yao for mayor, Ko told reporters that supporting or opposing an official were normal things in a democracy.

Tsai has been maintaining a brisk agenda during the Lunar New Year holiday. On Saturday alone, she rushed from temple to temple in Keelung, Taipei, New Taipei, Taoyuan, Hsinchu County, Hsinchu City and Miaoli.

Premier William Lai (賴清德) went “home” Saturday to Tainan, the city he ran as mayor for several years before being appointed to head the Cabinet last year.