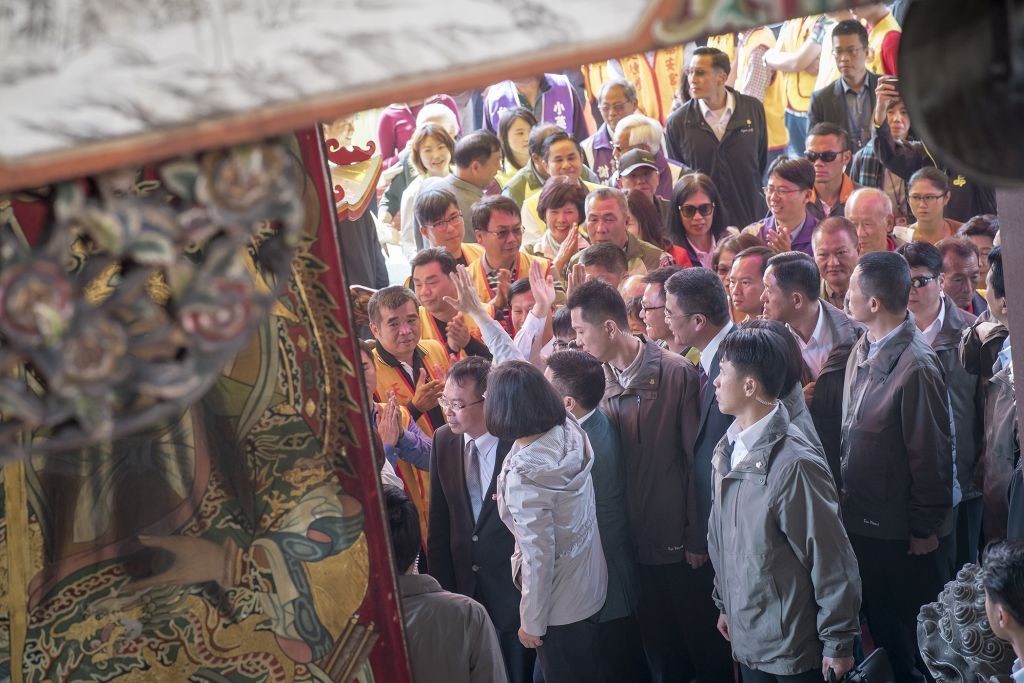 The President will be traveling across the country over the next three days to hand out red envelopes. And she became the first President to begin the tour in the south-east of the country, with Taitung’s Tianhou Temple () her first stop.

A large crowd estimated at more than 4,000 queued to receive New Year’s greetings from the President along with a red envelope. The envelopes, which each contain a single NT$1 coin, are meant to symbolize good fortune for the year ahead.

Before handing out the envelopes Tsai made an offering of fruit and flowers to the temple deity, the sea goddess Matsu. She then prayed for Taiwan to have a peaceful and prosperous year of the dog.

After Taitung, President Tsai then went on to pay visits to temples in Pingtung, Kaohsiung, Tainan, and Chiayi. Big crowds met her wherever she went with Sunfong Temple (三鳳宮) in the Sanmin District (三民區) of Kaohsiung particularly well attended.

Meanwhile, Premier William Lai (賴清德) visited Zhinan Temple (指南宮) in Taipei, where he handed out red envelopes along with several City Councillors and DPP Legislator Pasuya Yao (姚文智), who is planning to run for DPP candidacy in the Taipei Mayoral elections.

In her Lunar New Year’s address, which was broadcast on Thursday, President Tsai took the opportunity to assure residents in Hualien that the Government would stand with them whatever challenges they faced, after the recent earthquake which hit the city, killing 17 people and injuring many more.

She also pledged that the Government would work to develop an earthquake protection system, which could help to minimize the damage caused by future seismic events.

"This is our Taiwan," she said. "With solidarity and unity, we can overcome disasters. I hope the people of Taiwan understand that a friend in need is a friend indeed."

Tsai also took the opportunity to express her optimism over Taiwan’s economic outlook off the back of economic growth over the previous twelve-months which has surpassed expectation.

And she also used the speech to highlight the close cultural ties that Taiwan shares with neighboring China despite the deep political differences that divide the two countries.

She expressed her hope that the Lunar New Year celebrations would help to bridge the gap between Taiwan and China and help to bring the two sides closer through closer media connections and more cross-straits travel on both sides.