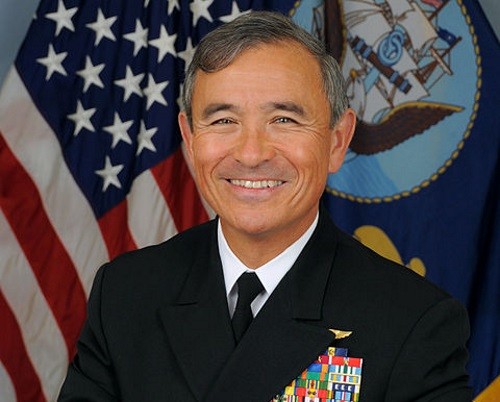 TAIPEI (Taiwan News) -- The US Congress has been told by a senior US military officer that the country must continue to help Taiwan defend itself and push back at any efforts by China to force unification with Taiwan.

The comments were made by Admiral Harry Harris Jr, who is Commander of the US U.S. Pacific Command (USPACOM) and as such responsible for US Navy efforts to ensure that international freedom of navigation remains in the South China Sea despite the efforts of China to unilaterally claim the waters as their own.

Admiral Harris was addressing a hearing of the House Armed Forces Committee on the current policies and security challenges that the US were facing in the Pacific region and took the opportunity to highlight the close relations between the USA and Taiwan, despite the lack of formal diplomatic relations.

He noted that Taiwan’s free market economy and vibrant democracy "reflect the shared values between Taiwan and the U.S." He continued, saying "we maintain a substantive and robust relationship with the people of Taiwan based on the Taiwan Relations Act of 1979."

He particularly noted the importance of arms sales to Taiwan and training being provided by the US military to the Taiwanese military to enable them to defend themselves.

Highlighting the significant rise in military spending in China, Admiral Harris made the point that as Chinese military capabilities rise, Taiwan’s ability to defend itself recedes.

“USPACOM will continue supporting Taiwan's efforts to develop a credible, resilient, and cost-effective deterrent and self-defense capability,” he said, before adding that this was vital to enable Taiwan to continue to effectively defend its democratic institutions.

In a statement that will prove reassuring to many Taiwanese people he went on to say, “we must continue to help Taiwan defend itself and demonstrate U.S. resolve that any attempt by China to force reunification on the people of Taiwan is unacceptable."

As well as challenging China’s efforts to annex the South China Sea, USPACOM has been at the forefront of recent cooperation between the military forces of Taiwan and the USA. Admiral Harris referred to this in his statement too, highlighting of maritime security, air and missile defense, and joint operations as areas where the two nations have worked particularly closely together.

The comments by Admiral Harris come at a time when the USA is showing a renewed unity with Taiwan in the wake of escalating threats and diplomatic challenges being posed by Communist China.

The U.S. Senate Committee on Foreign Relations has recently cleared the Taiwan Travel Act, which will open the way to more military exchanges between the U.S. and Taiwan if it passes a vote on the Senate floor, and then receives President Trump's signature. Recently, the removal of the Taiwan flag from the US State Department’s webpages has faced a robust response, with Senator Marco Rubio the latest to challenge the decision.