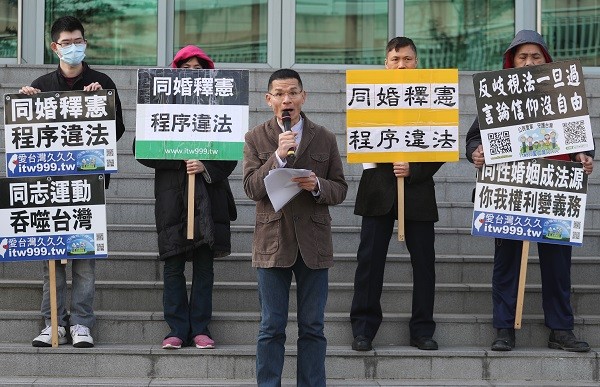 TAIPEI (Taiwan News) – On Feb. 13, the Alliance of Taiwan Religious Groups for the Protection of the Family filed a motion with the Taiwan High Court Administration to call for the Consitiutional Court ruling on gay marriage made in May 2017, to be annulled.

The Alliance for the Protection of the Family (護家盟) continues to claim that the Constitutional Interpretation No. 748 made in May 2017, which determined that same sex marriage must be legalized within a two year time frame, is illegitimate because of irregularities made during the judicial review.

The group claims that the process was not conducted according to the letter of the law, and that the ruling must be scrapped.

The group filed a similar motion in January, which was summarily dismissed by the high court. However, the secretary-general of the Alliance, Chang Shouyi (張守一) returned with a new petition this week, reports Kairos news.

Chang is spearheading an effort to see the May 2017 decision overturned, and a coalition of several civil groups are supporting him in his campaign, including; The Citizens Coalition to Safeguard Taiwan, the Alliance for the Happiness of Future Generations, and the Taiwan Civil Rights Solidarity Organization.

Outside the courthouse on Feb. 13, the demonstrators held poster boards that included slogans such as “The gay rights movement is devouring Taiwan,” and “Once these discriminatory laws are approved, people will have no freedom of speech and no religious freedom,” reports Gay Star news.

Just a few days earlier on Feb. 9 the representatives from Alliance for the Happiness of Future Generations also submitted a proposal to the Central Election Commission to call for a popular referendum that could potentially overrule the Constitutional Court’s decision.

While many have accused the Executive Yuan and Legislation Yuan of being too lax in creating the legislation necessary to abide by the Constitutional Court’s ruling, those opposed to the ruling on same-sex marriage are only increasing their efforts stop the legislative changes from taking place. 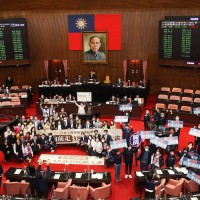