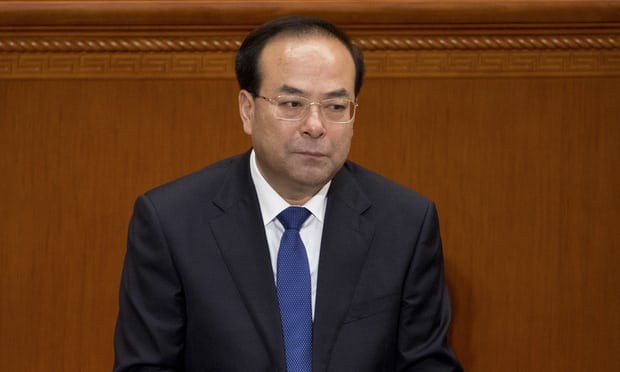 TAIPEI (Taiwan News) – A former contender for top leadership positions in the Communist Party of China, Sun Zhengcai, (孫政才) was charged with bribery on Feb. 13, concluding a corruption probe in his “illegal” activities that began in early 2017.

In another example of rampant corruption in the Chinese government, or bitter factional struggle disguised as a crackdown on corruption, or both, Sun Zhengcai has been formally charged with "illegally accepting a huge amount of assets from others" in a court hearing by the Tianjin People’s Procuratorate.

A year ago, Sun was the Communist Party Chief of the southwestern city of Chongqing, until he was abruptly removed from office in July last year. Later, accusations of his corruption were made public, and in November, 2017 he was expelled from China’s parliamentary body, which made him vulnerable to prosecution by the Supreme People's Protectorate, reports Channel News Asia.

Now that the charges have been handed down, in the first intermediate court of Tianjin, his case will proceed to trial, where he is almost certain to be found guilty, according to reports.

In addition to the charges of graft and corruption, before being officially ousted from government, the Politburo also announced that Sun was guilty of “losing faith in Communism, betraying the Party’s principles” and among several other charges also of “being bureaucratic, lazy” as well as “leaking confidential Party information, and trading power for sex.”

Recently, in weeks before the official charges were handed down, Sun’s relationships with several of his mistresses have become tabloid topics in the Chinese mainstream, according to reports.

Apple Daily reports that at a meeting of the Communist Party in Chongqing on Monday, Feb. 12, Sun’s successor and current Chongqing Secretary, Chen Miner(陳敏爾), who is also considered a close friend of Xi Jinping, referred to Sun Zhengcai as man with “unbridled political ambition, and personal desire” as well as a “classic example of corruption.”