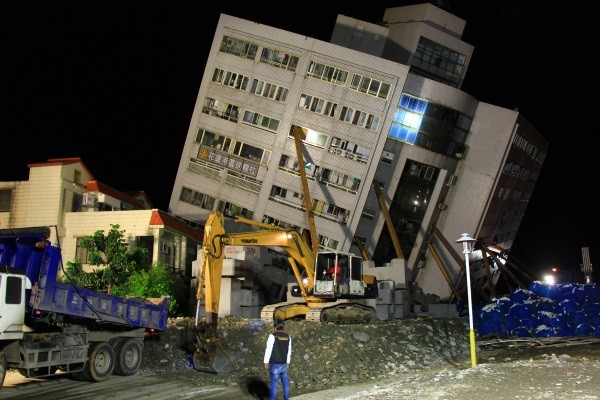 TAIPEI (Taiwan News) -- The death toll from a magnitude 6.0 earthquake which struck Hualien County in eastern Taiwan on Feb. 6 has risen to 17, while 291 have sustained injuries, according Hualien County Commissioner Fu Kun-chi (傅崐萁).

The last of a family of five Chinese tourists was confirmed to by dead by rescuers yesterday (Feb. 11) in the Beauty Inn hotel (漂亮生活旅店) section of the partially collapsed Yun Men Tsui Ti building (雲門翠堤大樓), which is leaning precariously by 30 degrees. After the last of the five missing Chinese tourists was confirmed to be dead, rescue efforts were called off on Sunday morning.

The last body found and that of another family member are to remain in place for now as they lie beneath a girder, which if removed in its present state could cause the building to collapse further. Therefore, workers are going to raze the building one floor at a time, starting with the top floor, until they reach the bodies of the victims.

Workers are taking special measures to protect the bodies of the deceased, including covering them with blankets, marking room 201 with red spray paint, cordoning off the area with yellow tape, and shielding the bodies with wooden boards, reported Liberty Times. Once all of the floors above have been removed with heavy equipment, workers will carefully remove the remaining debris with an excavator and by hand, to avoid inflicting any additional damage the remains of the victims, with the goal of having them being retrieved by Friday of this week (Feb. 16), according to Fu.