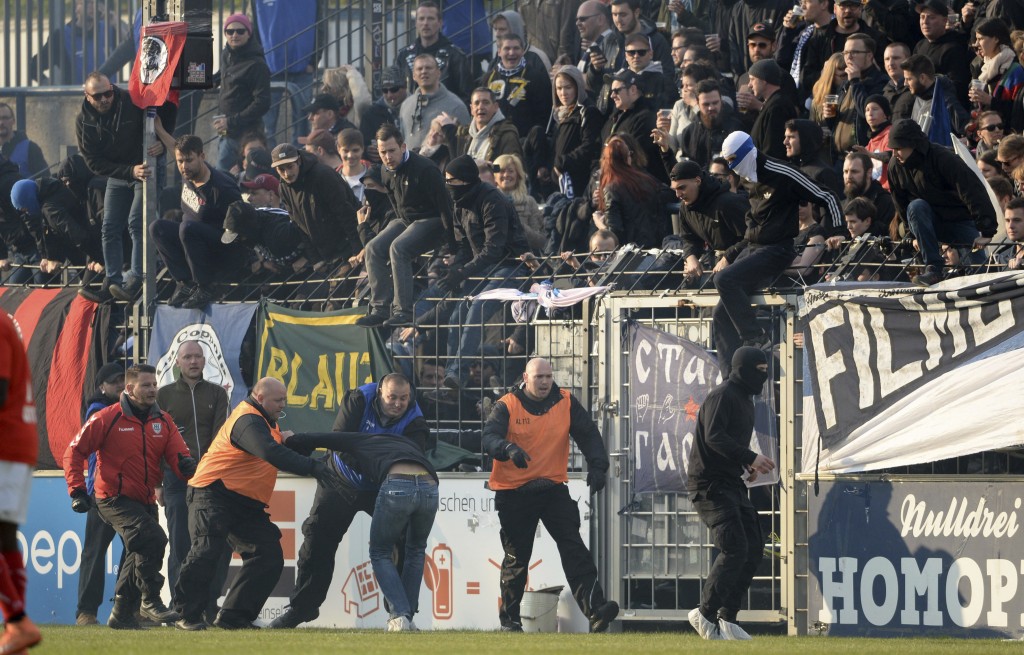 BERLIN (AP) — Despite being threatened with exclusion from Germany's northeast regional league, Babelsberg is refusing to pay a fine in a case that has turned a spotlight on anti-Semitism in German soccer.

Babelsberg is refusing to pay a 7,000-euro ($8,500) fine imposed by the Northeast German Soccer Federation (NOFV) after its fans chanted "Nazi pigs out" at Energie Cottbus supporters during a fourth-tier league game between the sides last April.

The club says its fans were reacting to right-wing chants from mostly masked Cottbus supporters, including, "Ticks, gypsies and Jews," and "Work sets you free" - a reference to Nazi concentration camps. Cottbus fans also performed Nazi salutes, as can be seen in a video circulated by the Berlin-based Jewish Forum for Democracy and Against Anti-Semitism.

While both clubs were fined for the trouble, which included the use of pyrotechnics by both sides and attempts to storm the pitch from Cottbus supporters, Babelsberg was particularly aggrieved that the NOFV made no mention of the Cottbus fans' chanting in its report, focusing only on the home supporters' response.

The NOFV said on Monday it was unaware of any right-wing chanting or Hitler salutes when it made its initial judgment. It was to hold a press conference on the matter on Thursday.

Babelsberg missed two deadlines to pay its fine and has indicated its unwillingness to do so, prompting the NOFV to look at suspending the club.

NOFV chief executive Holger Fuchs said Babelsberg could be banned from playing in the league until the fine is paid, ultimately leading to relegation at the end of the season.

Babelsberg has appealed to fans for donations to help it fight its case should it go to court, while it has started selling merchandise with the slogan "Nazis out of the stadiums!" on the club website. The club is also offering "solidarity membership" for new club members.

Some feel the case highlights a tendency to brush over right-wing hooliganism and anti-Semitism in German soccer despite recent incidents.

The NOFV initially overlooked anti-Semitic chanting at a fourth-tier derby between Lokomotive Leipzig and Chemie Leipzig in November, when the home fans sang "Turks, gypsies and Jews" and other chants at the visitors.

The chants were clearly audible in TV footage, however, and the NOFV announced last week it was going to investigate.

"We simply did not know that there were such songs in the stadium," Stephen Oberholz of the NOFV said. "These were neither mentioned in the referees' reports or by the NOFV game observers, nor by the police or the clubs. The issue is a top priority for the German soccer federation and the NOFV."

Germany's World Cup qualifier against the Czech Republic was marred by Nazi chants from visiting supporters in September, leading to a furious response from coach Joachim Loew and defender Mats Hummels among others.

Many clubs have started initiatives to fight against right-wing extremism and some, including Hamburg-based St. Pauli, have expressed their support for Babelsberg in its fight against the NOFV.

Babelsberg is next due to play at Union Fuerstenwalde on Saturday.