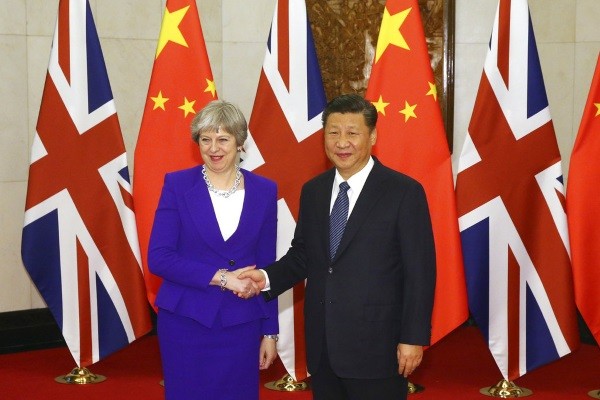 Last week, the British Prime Minister, Theresa May, paid a visit to China. The visit took place at a time when Brexit continues to dominate British politics and was intended to provide a positive view of post-Brexit Britain being able to build the type of closer trade relations with global superpowers that it is unable to do while in the EU.

In that sense, it was pretty successful, with GB£13 billion of deals signed off while she was there. However, the British Prime Minister returned home to something of a firestorm after journalists and activists accused her of dodging the issue of human rights whilst there. These accusations were not unfounded.

How Theresa May ‘sidestepped’ human rights issues in China

Her visit received praise from the Chinese state media for its lack of controversy, which is frankly never a good sign. In the English language edition of the state-run Global Times, May was dubbed as “pragmatic” for failing to raise human rights issues, and instead just making "enthusiastic and positive remarks about China". Meanwhile, both she and French President Emmanuel Macron, who also recently visited China, were commended for “sidestepping” the human rights issue.

The Communist Party mouthpiece concluded that “this shows that the Sino-European relationship has, to a large degree, extricated itself from the impact of radical public opinion.”

By ‘radical public opinion’ what they mean of course is those who vocally oppose the Chinese Communist Party’s (CCP) appalling track record of human rights abuses. Their view is that these issues are their own domestic business and how the party chooses to abuse its own people is not the business of the rest of the world. International diplomacy should, in the eyes of the CCP, be confined solely to economic relations.

Such an approach is of course completely unacceptable, especially when a country like China is so flagrantly flouting so many international laws and basic human norms.

Quite rightly, Theresa May was slammed by the British media and by human rights activists on return from her visit for failing to mention human rights publicly, despite insisting beforehand that she would do so.

Why is China treated differently to other authoritarian regimes? But inevitably the issue quickly died down and, at a time when Theresa May is facing a myriad of other problems, it quickly proved to be the least of her concerns.

But that is not how it should be. The UK and other European countries never fail to trumpet their self-declared position as bastions of freedom and democracy and are quick to criticize many other regimes around the world which do not live up to their high standards. So, why is China treated any differently?

The brutal reality is that it all comes down to money. China is not shy about using its economic clout as its major diplomatic tool. And sadly, there appears to be not a single developed nation that is able to resist this allure.

Usually, there is an acceptance that they need to be seen to be questioning China’s human rights record publicly. What this means, in reality, is a brief mention of the issue at a joint press conference (which is naturally censored to Chinese audiences) followed by ‘private conversations’.

Whether such ‘private conversations’ do actually take place is open to question. But even if they do, they never appear to lead to any tangible changes in Chinese policy. However, that claim is usually still enough to placate the media and human rights activists until the next visit takes place. And that is frankly most visiting politicians main concern. Principals be damned!

Why Theresa May did not follow this fairly established procedure this time round is perhaps evidence of how important Britain views future economic ties with China post-Brexit. She was seemingly reluctant to raise such challenging issues even in passing for fear of upsetting her Communist benefactors.

There was a belated statement from Downing Street that she did raise human rights issues with both President Xi Jinping and Premier Li Keqiang in, you guessed it, private discussions. But this time, such a claim was too little too late.

Gui Minhai and how human rights abuses should be addressed The willingness of the western world to sweep Chinese human rights abuses under the carpet is something which should shame them all. But, of course, things can change when the abuses in question are happening to citizens of their own countries.

This is the case at the moment with Swedish citizen Gui Minhai, a bookseller based in Hong Kong, who has been detained by Chinese Communist Party officials for several weeks now.

It is not the first time Gui, whose bookshops sells gossipy books about senior Communist Party officials, has been detained by Chinese officials. In 2015, he was abducted from his home in Thailand and held for several months after reports that he was planning to publish a book about a former mistress to the Chinese President.

He has since been unable to leave China but was traveling with Swedish diplomats in January when he was seized once again. In this case, the international outcry has been significantly different to the usual platitudes.

Swedish Foreign Minister Margot Wallstrom has said publicly that Gui’s abduction was “brutal” and "contrary to basic international rules on consular support." However, she was criticized for taking almost two weeks to make the statement. The Swedes also went so far as to summon the Chinese Ambassador over the issue.

The US Government has also condemned the detention of Gui, with State Department spokesperson Heather Nauert saying “We call on Chinese authorities to explain the reasons and legal basis for Mr Gui's arrest and detention, disclose his whereabouts, and allow him freedom of movement and the freedom to leave China.”

It is refreshing to see Western governments willing to condemn China over such a blatantly unlawful detention. Although the fact that Gui remains in detention at the time of writing shows the obvious contempt China holds for the opinions of democratic governments and international norms.

It is a little less reassuring when you realize that their concern about Gui clearly stems from the fact that he holds Swedish citizenship and was detained despite the presence of Swedish diplomats. The fact that such detentions happen to Chinese citizens every day and the overarching principals behind this are not at the forefront of their minds at all.

If the regular and gross violations of human rights in China are to be reigned in and any form of individual freedom returned to the Chinese people, then it has to be incumbent on Western diplomacies to make a public stand on these issues.

It is no longer acceptable to ‘sidestep’ these key issues, while simultaneously accepting billions of dollars from the Communist regime in China for doing so. Such an approach normalizes and legitimizes practices which should be anything but normal and legitimate in 21st-century society.

Such criticisms must not be confined to Western citizens alone either. Strong issue has to be taken against the detention and persecution of all those who suffer under the Chinese regime, from human rights and democracy activists to religious groups and ethnic minorities.

Regular criticisms should be made both unilaterally and through the numerous international bodies where the Chinese regime sits brazenly alongside democratically elected governments. It must be made abundantly clear to China that such abuses will not be tolerated, where they are dolled out on Chinese or international citizens.

And if such warnings are ignored, they must be followed up with tangible action. Economic sanctions and travel restrictions against the country and individual Communist Party leaders should be put in place to hit the CCP and its leaders where they really hurt; in their pockets.

And this is about more than just reigning in the Communist regime in China. If a stronger stance isn’t taken on these issues, then the spread of authoritarian regimes will continue around the world. Democracy will continue to be eroded around the world, and assaults of freedoms will spread outside national borders and across the globe.

Unless the free world takes action now, in the long run, it will not just be the Chinese people who suffered at the hands of the CCP. It will be everyone.