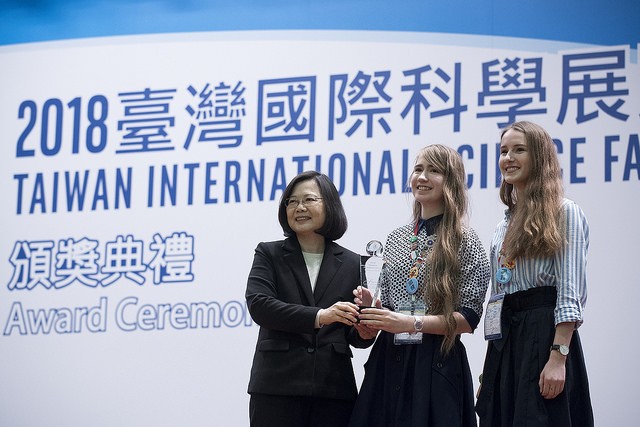 President Tsai Ing-wen (蔡英文) said that multidisciplinary integration holds the key to the cultivation of science talent in Taiwan and the government is leaving no stone unturned in fostering cooperation among the academic, private and public sectors in this regard.

It is the responsibility of the current generation to ensure young people interested in science receive the support they need to boldly pursue their dreams, Tsai said. This is why the government is increasing investment in related education and research, she added.

According to the president, examples of the government’s commitment to sparking interest in scientific research include overhauling the Fundamental Science and Technology Act and promoting the five-plus-two innovative industries initiative. In addition, the New Southbound Policy has created more opportunities for international exchanges in the field, she said.

The 2018 edition of TISF, which kicked off Jan. 28 and ran for five days, attracted student teams from 23 countries and territories. Of the 240 science projects submitted for assessment, 118 made the final round and 54 were awarded.

According to the president, the fair’s theme of Science, Technology, Engineering, Arts and Math demonstrates the value of a broad approach to helping human civilization overcome challenges and achieve sustainable development.

“In the face of fierce global competition, we need more scientists that can balance creativity, a global outlook and concern for society,” she said, adding that it is her hope TISF participants will change the world by continuing to explore unknown vistas in science.

The five-plus-two innovative industries initiative is at the vanguard of government efforts to revitalize Taiwan’s economy. It targets the five emerging and high-growth sectors of biotech and pharmaceuticals, green energy, national defense, smart machinery and Internet of Things, as well as focuses on promotion of two core concepts: circular economy and a new paradigm for agricultural development.

Of equal importance, the New Southbound Policy aims to create fresh economic impetus and deepen business, cultural, education and trade links between Taiwan and Association of Southeast Asian Nations member states, South Asian countries, and Australia and New Zealand. One of its top priorities is bolstering people-to-people exchanges and talent flows between Taiwan and Southeast Asia.