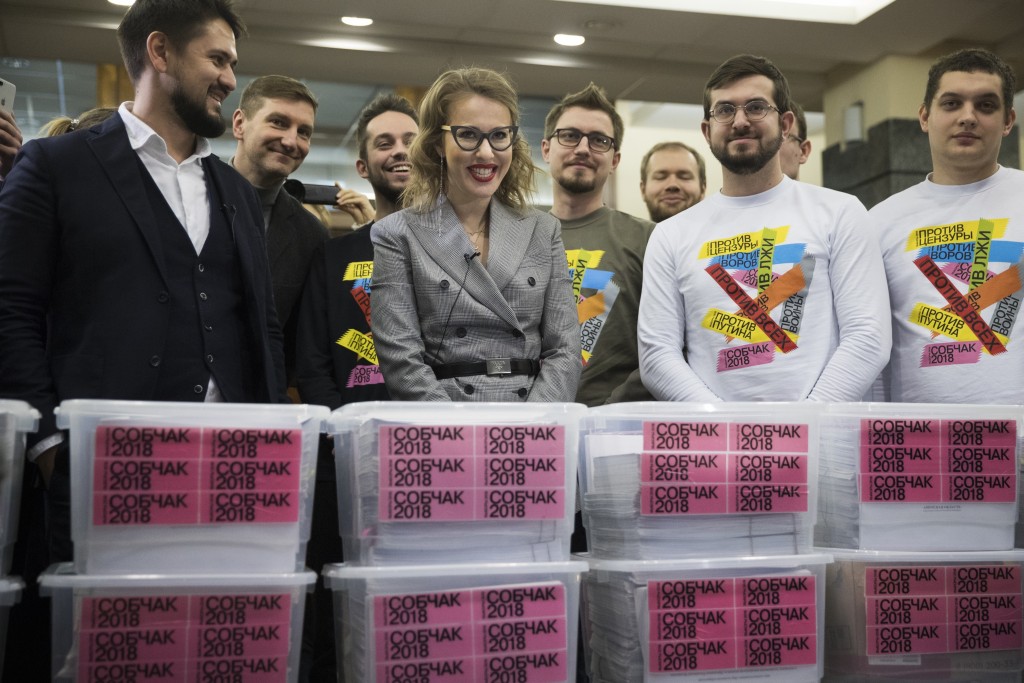 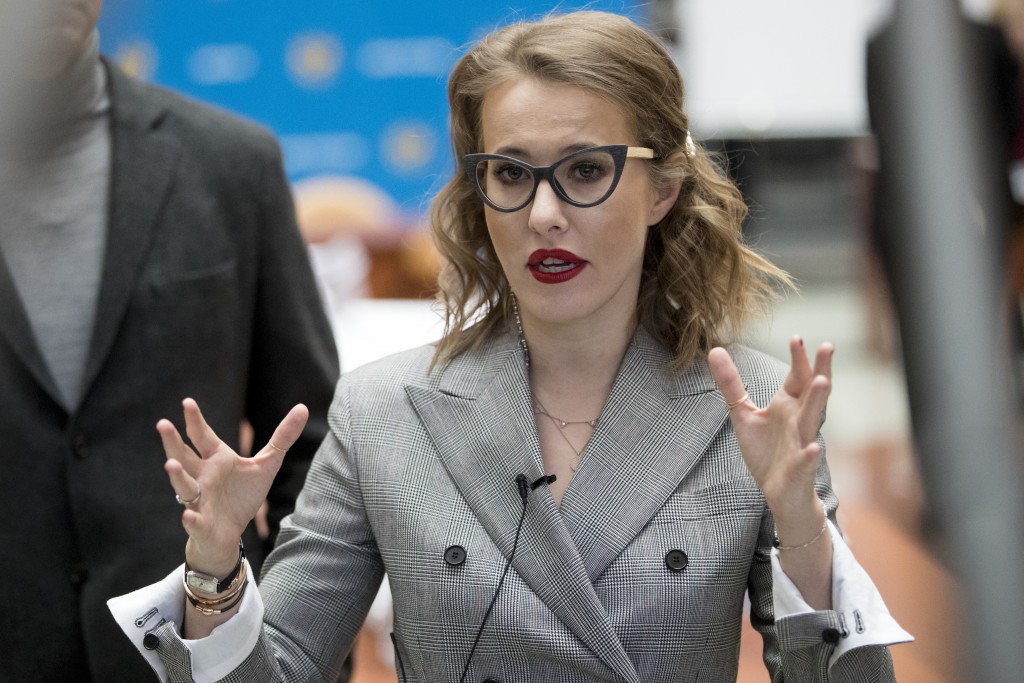 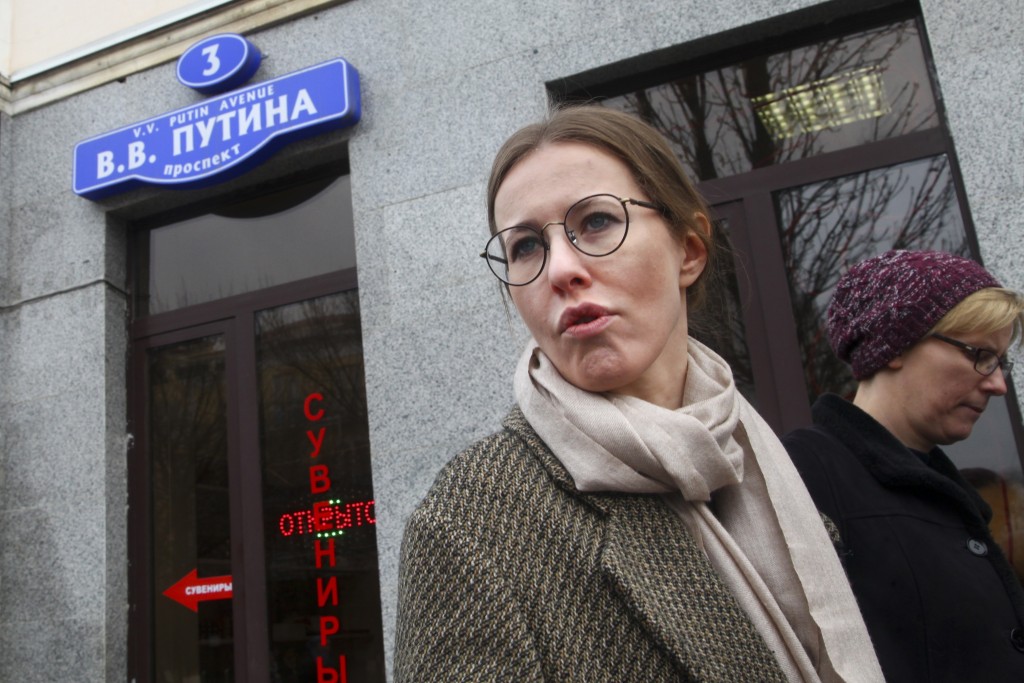 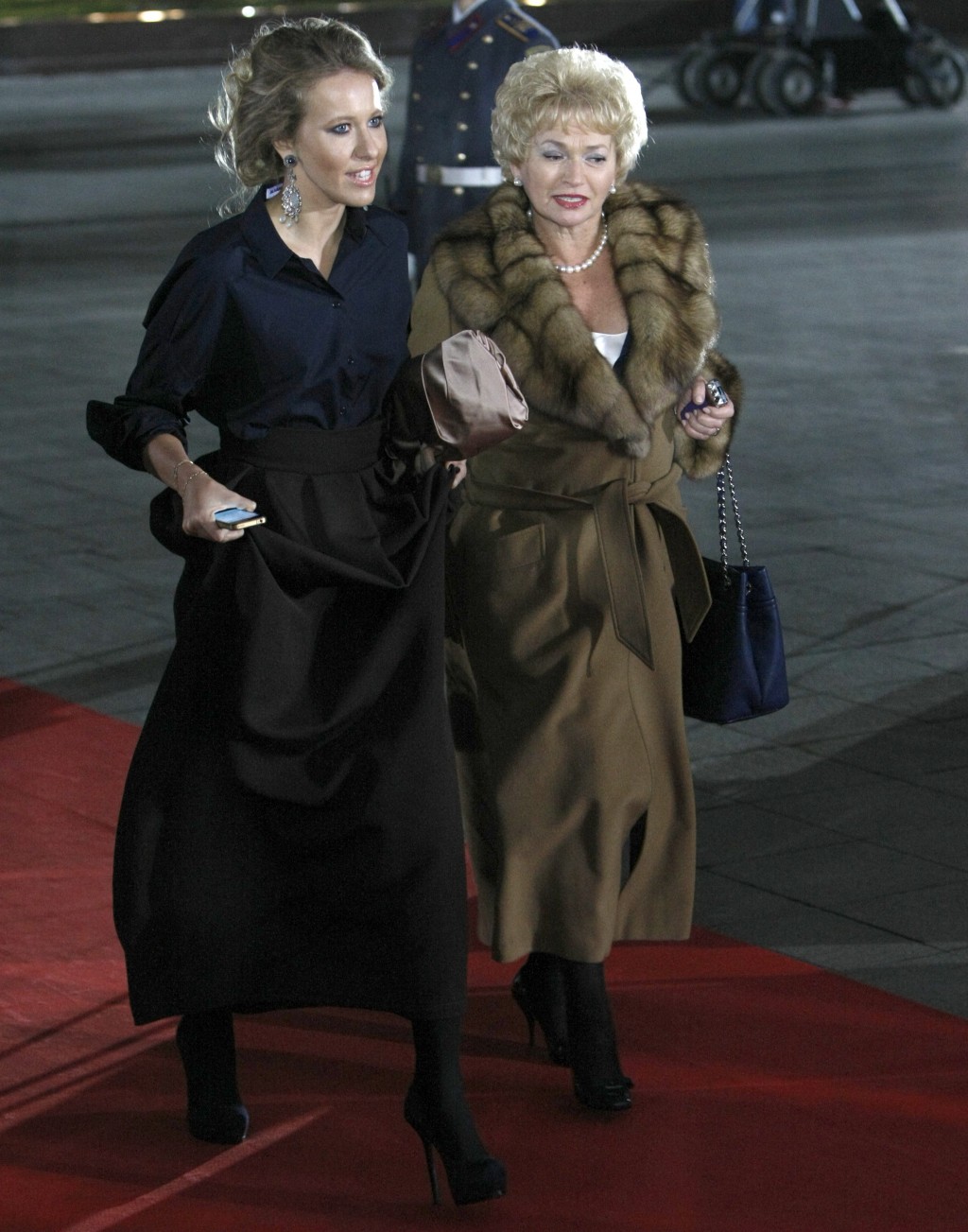 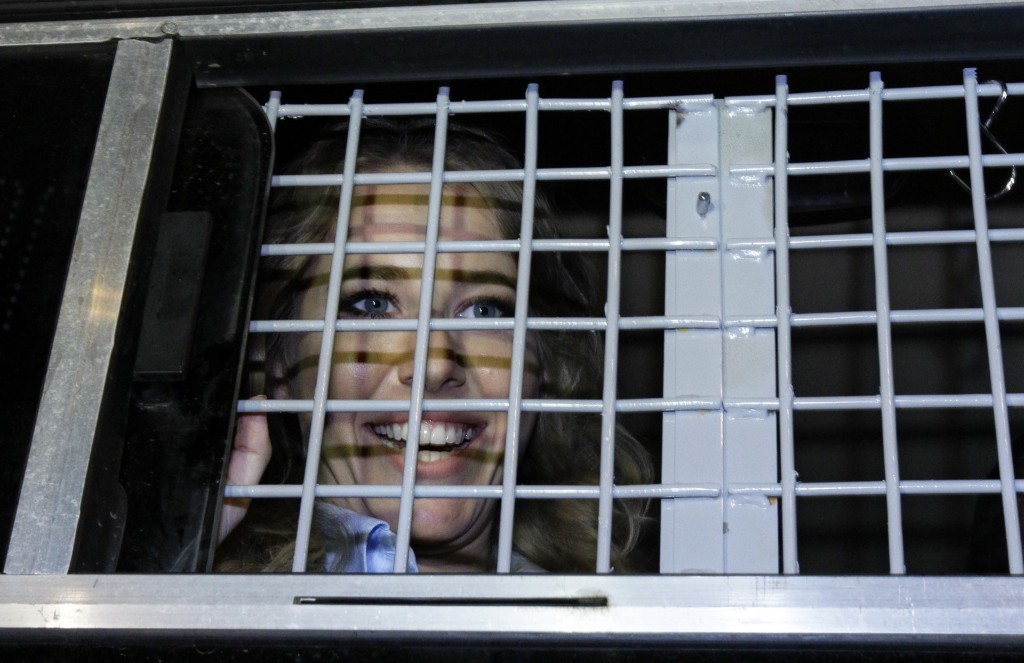 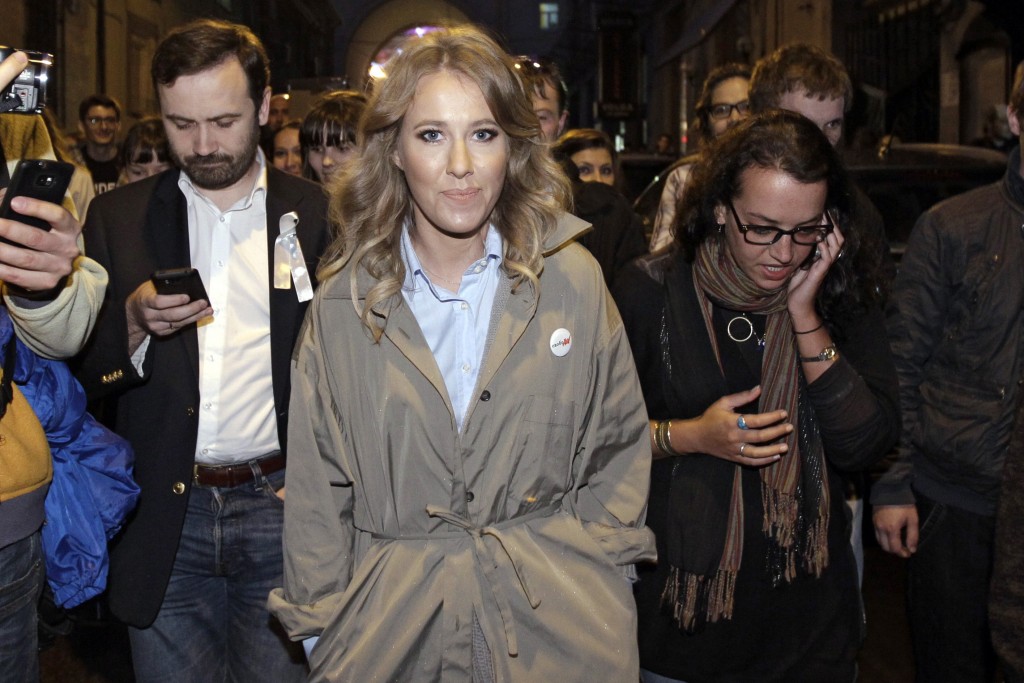 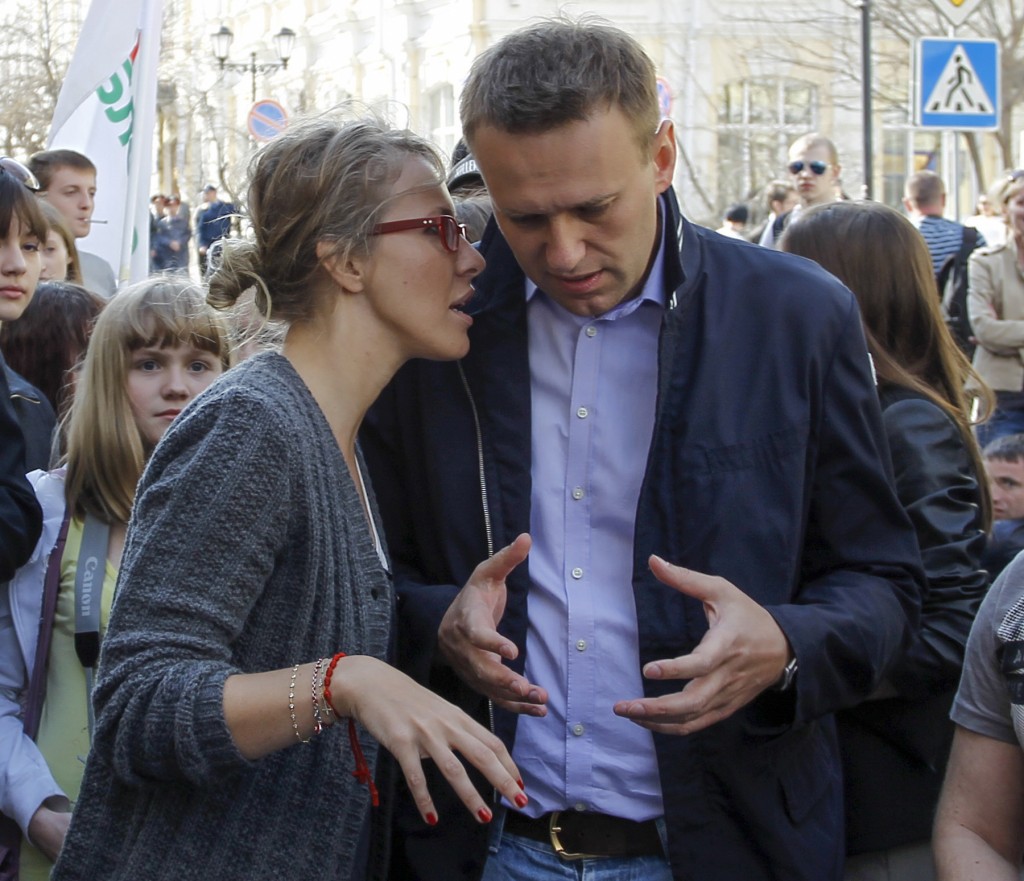 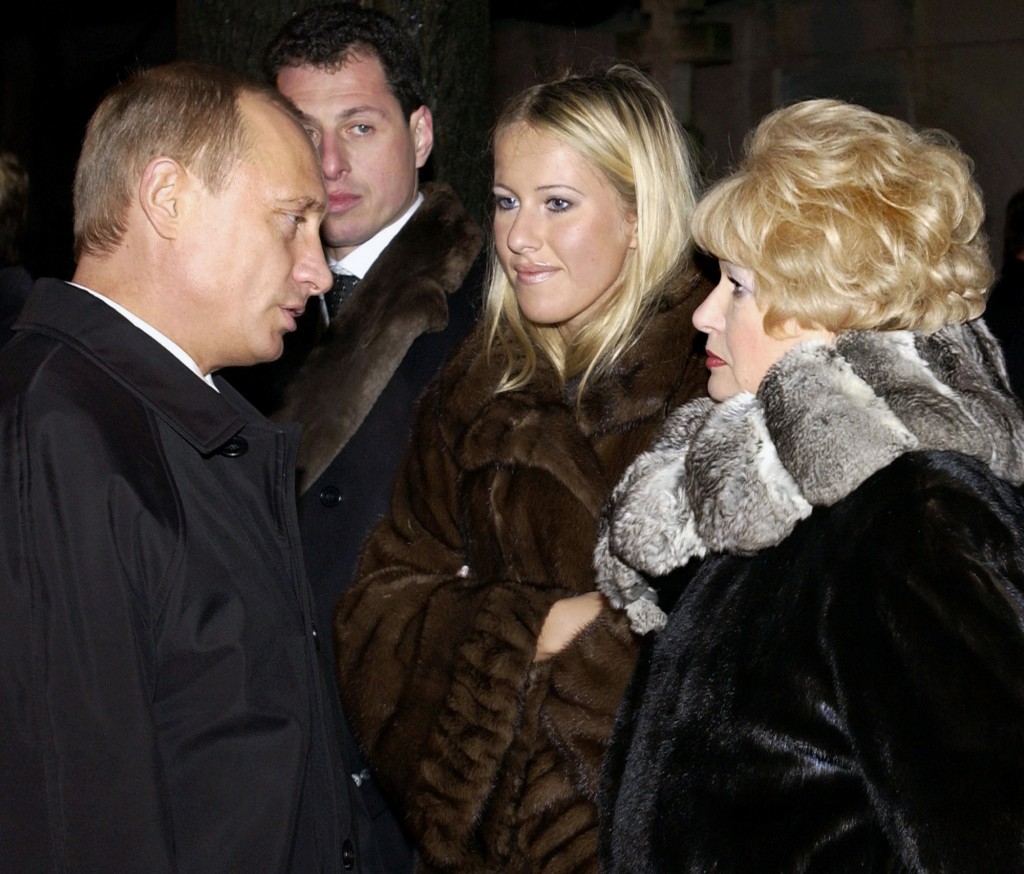 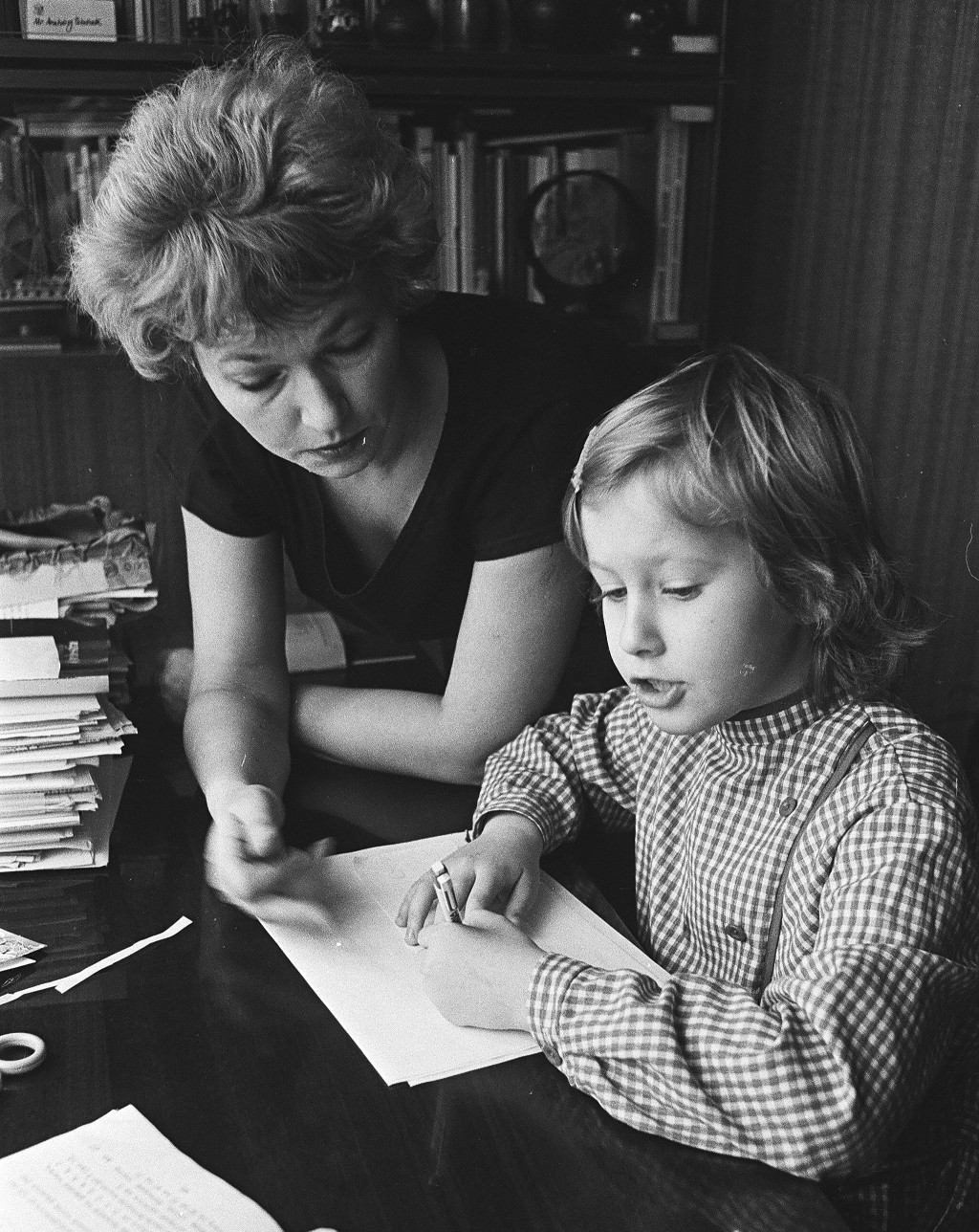 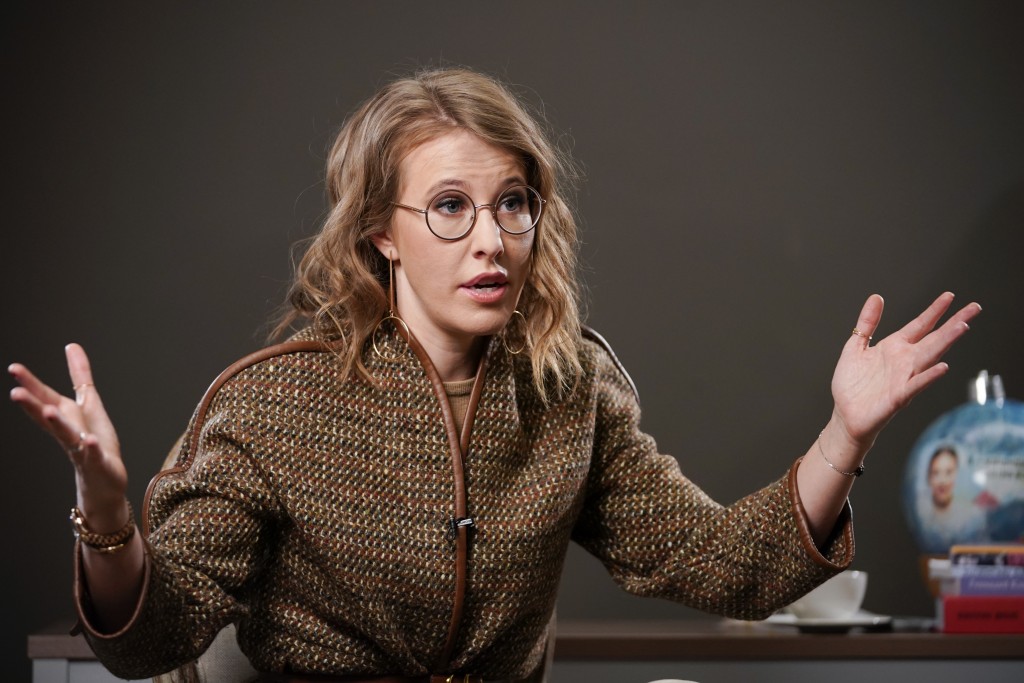 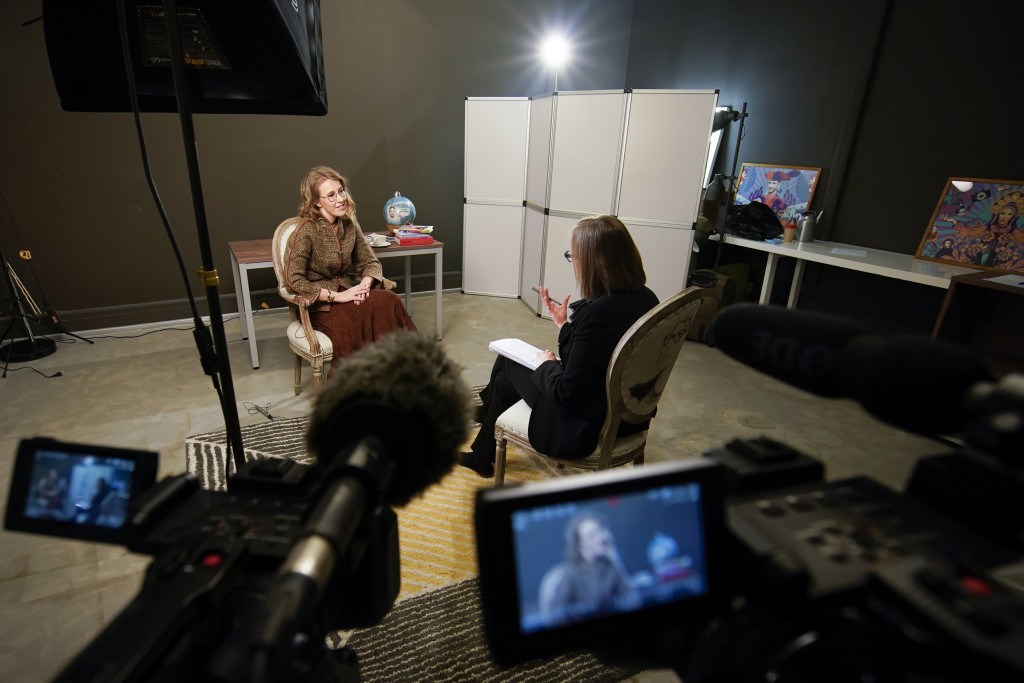 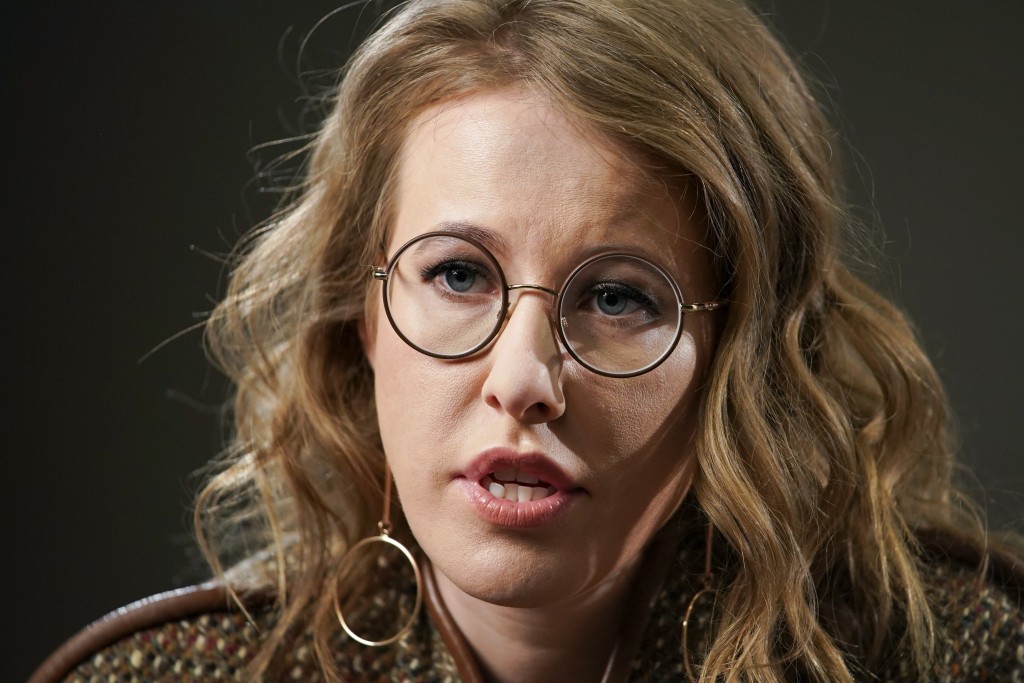 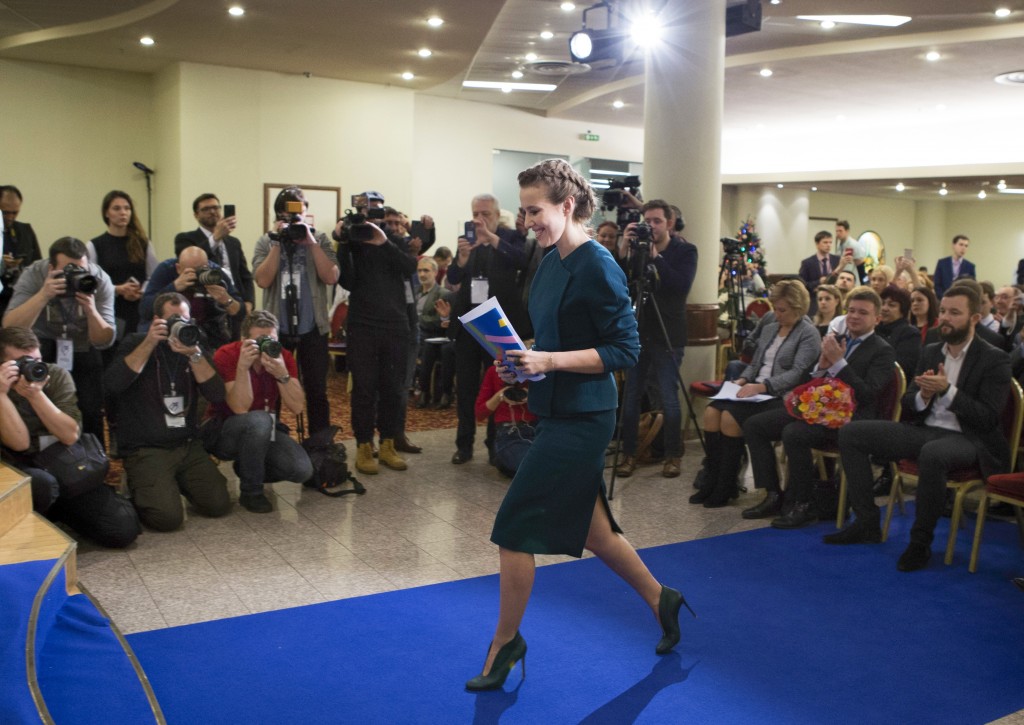 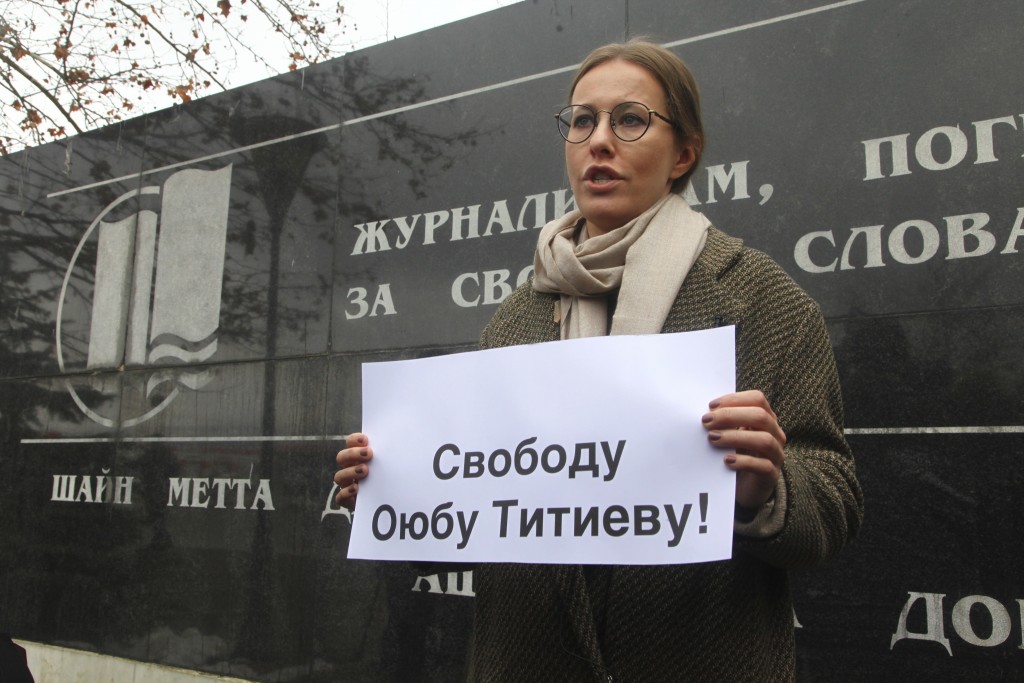 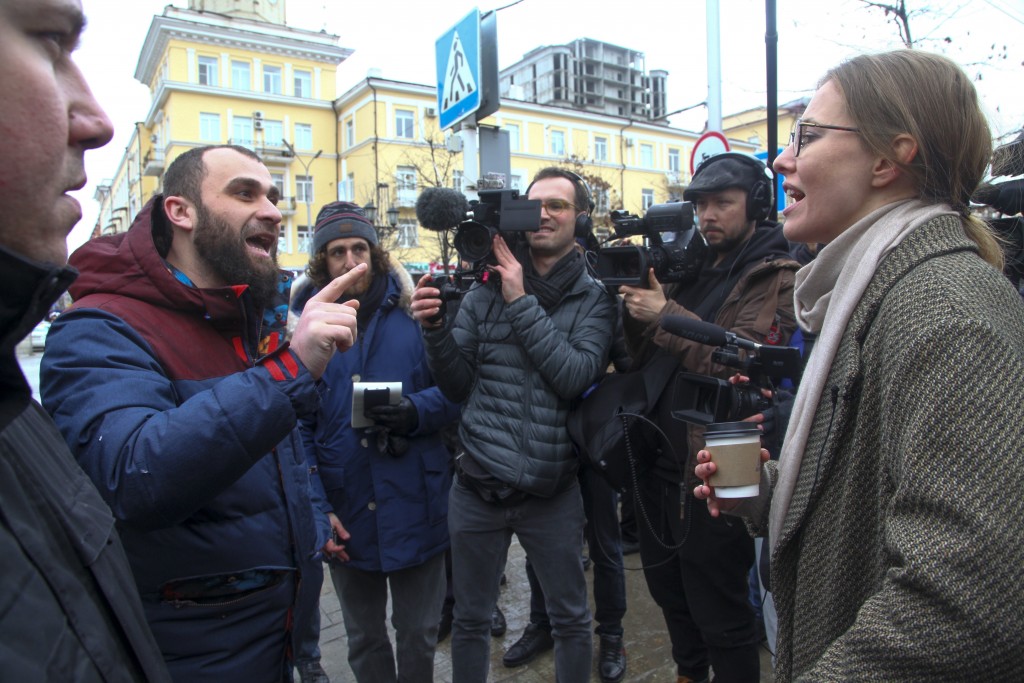 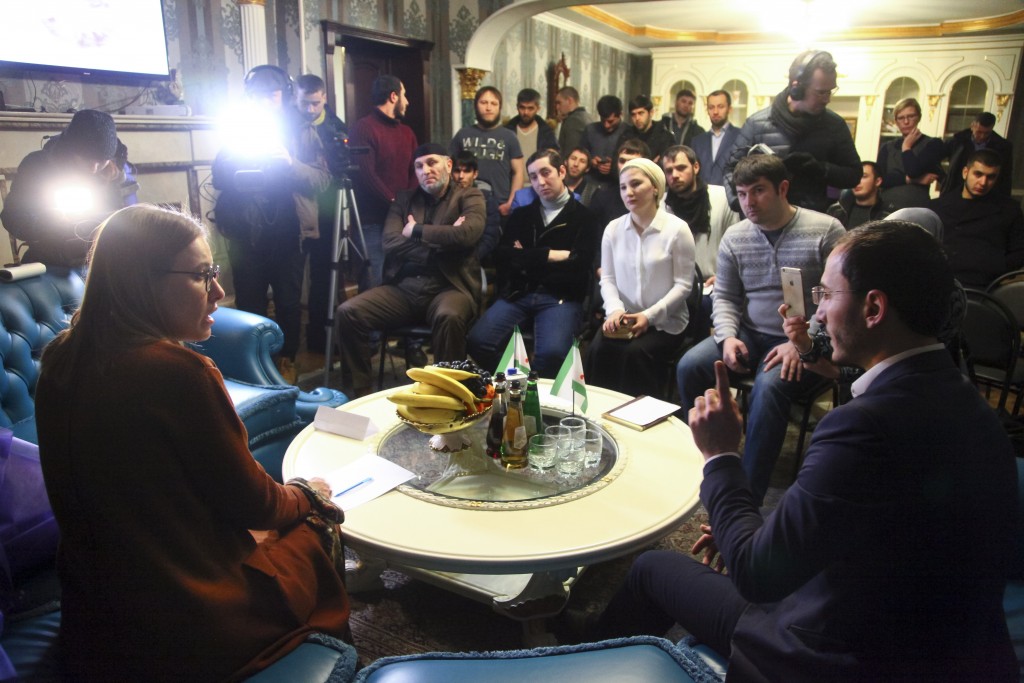 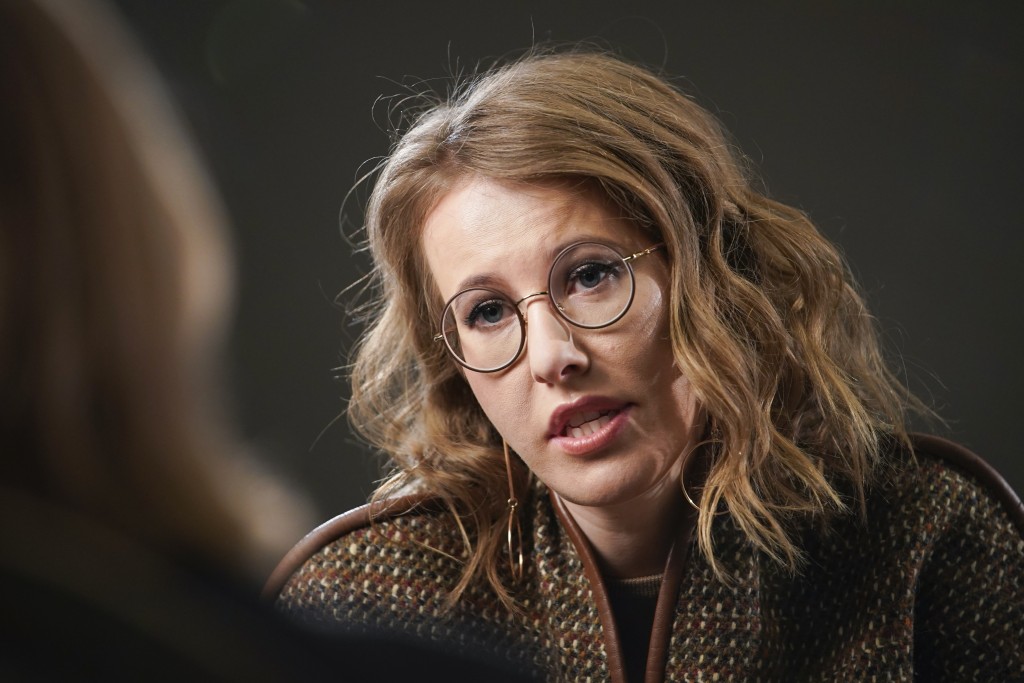 But he has one rival who could draw voters to the polls: the celebrity TV host Ksenia Sobchak.

With her glamour, sharp wit and defiant ways, Sobchak is both loved and loathed — and maybe is just the candidate the Kremlin needs to give the March 18 election the veneer of legitimacy it so desires.

"My popularity is huge," the 36-year-old said in an interview with The Associated Press. "I'm the only person ... known to all Russian people like Putin. There is no one else in the country who is as well-known as me."

Her campaign slogan, "Sobchak against all," promotes her as the choice of those who are tired of the same old candidates who ran against Putin before.

"I'm the kind of person whom you like or hate, you never stay neutral," she said, speaking in English at her campaign headquarters.

She also has no chance of winning, not when Putin enjoys a job approval rating of more than 80 percent and gets fawning coverage on state-run national TV.

In addition to boosting turnout to make a Putin victory look more impressive, Kremlin strategists also hope that Sobchak will peel away at least some supporters of his most vocal foe, anti-corruption campaigner Alexei Navalny, to help split the opposition's ranks.

Navalny has been barred from running because of a criminal conviction that is widely seen as politically motivated for challenging Putin's rule. Many of his supporters accuse Sobchak of serving as a Kremlin-sponsored spoiler in the race.

While Navalny has called for boycotting the vote and challenged the authorities with unsanctioned protests, Sobchak argues that his strategy won't succeed.

"Navalny is a big hero, but he chose a way where he would either be put to jail or he would be marginalized," she said.

Sobchak argues that she stands for evolutionary change.

"I don't want revolution in my country," she said. "The only way to change Russia without blood is evolution."

Sobchak, who is the daughter of Putin's late patron, the former mayor of St. Petersburg, rejects accusations of any collusion with the Kremlin.

When she entered the race, Sobchak admitted that she had told Putin about her intention to run, but denied that she was following Kremlin orders.

She maintains that she joined the race to draw attention to the most acute issues and promote liberal values.

"What I do is good for Russian opposition," she said. "What I do is I speak freely on the things and items that were never discussed loudly with Russian public for years. And I think this is actually the most positive thing that can be done during those elections."

She certainly isn't afraid of criticizing Putin's government, lambasting it with an ardor that even some of its fiercest opponents would envy.

In the AP interview, Sobchak said she believes Russian hackers working with the government interfered in the 2016 U.S. presidential election — something the Kremlin has steadfastly denied.

"I think those hackers, of course, they were Russian, and it had to do something with the government," she said. "I don't rule out this kind of meddling."

While she qualified her statement by saying she doesn't have any facts to prove it and bases her view on news reports, her words were in stark contrast with Kremlin denials.

In another salvo at the Kremlin, she described the list of Russian officials and tycoons put together by the administration of President Donald Trump in compliance with U.S. sanctions law as a slipshod job, saying it unfairly includes some tycoons who have no connections to the Kremlin but misses some key figures. She said she would suggest adding more names to the list when she speaks with U.S. officials during an upcoming trip to the United States.

She singled out cellist Sergei Roldugin, whose $2 billion in offshore assets publicized in the so-called Panama Papers in 2016 were allegedly linked to Putin.

"I think Roldugin should be added to the list," Sobchak said, noting that she believes she would also share the names of Russian generals and others who were involved in Russian actions in Ukraine to be added as potential targets of U.S. sanctions.

"I'm a politician who's against corruption that Putin has done in our country," she said.

Asked if she would go as far as to track down Putin's alleged personal fortune, she said: "Of course, if this fortune is found, I think it should be brought back to the state."

But many political observers are skeptical of her positions, saying she is merely imitating a liberal, pro-reform agenda.

Since declaring her candidacy, Sobchak has appeared on prime-time talk shows and is featured regularly in news reports on state-run TV. That could only happen with the blessing of the Kremlin, which tightly controls TV programming.

She has challenged the government on many issues, criticizing Russia's annexation of Ukraine's Crimean Peninsula, calling Western sanctions a due punishment for that, and assailing the government's treatment of dissent.

Last weekend, Sobchak made a brief foray to Chechnya, where she protested the jailing of a human rights campaigner. Skeptics argued that her visit could only happen if the Kremlin signaled to regional strongman Ramzan Kadyrov that he should stand back.

International rights groups have criticized Kadyrov for rampant rights abuses, including extrajudicial arrests and killings of his opponents; the former rebel denies the accusation.

Even though Sobchak seeks to pose as a thoughtful and sincere political candidate who cares about people's needs, her glamorous persona and star power have broken through.

On her trip to Chechnya, Sobchak got a late start and wound up spending only about two hours in Chechnya, traveling in a convoy of shiny white SUVs with a heavy security force that contrasted with the impoverished surroundings of empty roadside cafes and ramshackle houses. She was surrounded by cameras, their lenses trained on her every move as a large Putin campaign poster loomed behind.

In the neighboring province of Ingushetia, Sobchak was given a whistle-stop tour of a memorial to the victims of mass deportation by Soviet leader Josef Stalin. As the cameras focused on her, she solemnly looked at the portraits of starving victims before denouncing Stalin as a monster.

Her visit drew the sympathy of some voters excited to meet a celebrity.

"I think that she has a chance of winning," said 22-year-old Kamila Khautieva, after talking to Sobchak.

Many other Russians are skeptical.

"'Sobchak against all,' I know her slogan," said 20-year-old university student Elizaveta Nikitenko in Moscow. "It sounds very aggressive. It's not our thing; we need other slogans that mean compromise and good deeds."

In the AP interview, Sobchak argued that her celebrity makes her an easily recognizable brand, able to win over even those voters who resent her.

"I'm positively sure you won't find a single person on the streets of Russia who don't know who is Ksenia Sobchak, may be babies 3 months old," she said, adding that she hopes to repeat the "Trump effect."

"Many people would vote for me, I'm quite sure, because I'm working in this industry for more than 15 years (and) I know the rules of how brand works," she said.

"And this is actually my main idea why this should work, because we all know (the) 'Trump effect,'" Sobchak said. "I hope for it. This is why I went on it."

Francesca Ebel in Moscow contributed to this report.