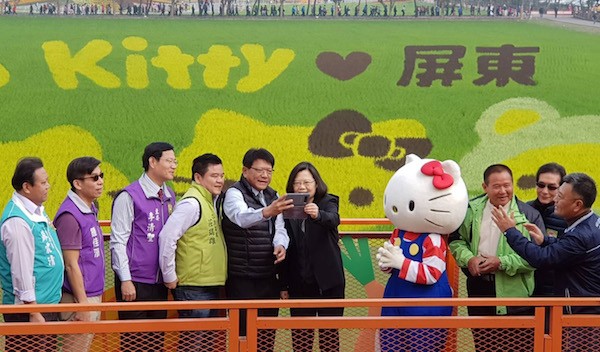 TAIPEI (Taiwan News) — President Tsai Ing-wen (蔡英文) joined a Hello Kitty costume character on Saturday to open the Pingtung Tropic Agriculture Expo in southern Taiwan and even took a selfie with a rice farm on which an image of Hello Kitty and friends was shown through different colors of rice.

The rice farm with special images has proved popular among visitors. After collaborating with Sony Pictures to create the image of “Resident Evil” in 2017, the county government decided to work with Sanrio this year, with the hope of attracting the fans of one of the most popular fictional characters in the world. Through the picture one can see two Hello Kitty characters with five friends extending across a huge rice farm. According to the event organizer, the image is created by different types of rice seedlings which, after being cultivated, have come up with five colors of rice leaves, including purple, white, yellow, black, and green.

The organizer said the special seedlings were provided and controlled by the Taiwan Agriculture Research Institute, and that they were for appreciation only.

During the opening remark, President Tsai recommended families take a trip to the fair, for it was combined with land art and several workshops related to farming and food-making.

The president said the expo demonstrated the county’s agricultural development, such as cocoa production. Although many people in Taiwan might know little about Pingtung’s cocoa and coffee beans, their high quality had been recognized in international competitions, added the president.

Apart from Hello Kitty and cocoa, there are 12 other sections where visitors can appreciate a huge garden, experience horse-riding, and buy local produce and seafood, according to the county government.

The agriculture expo will remain open until March 4 and admission is free. For more information, please visit the website. 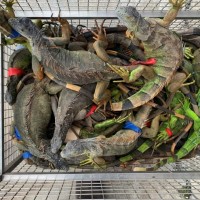