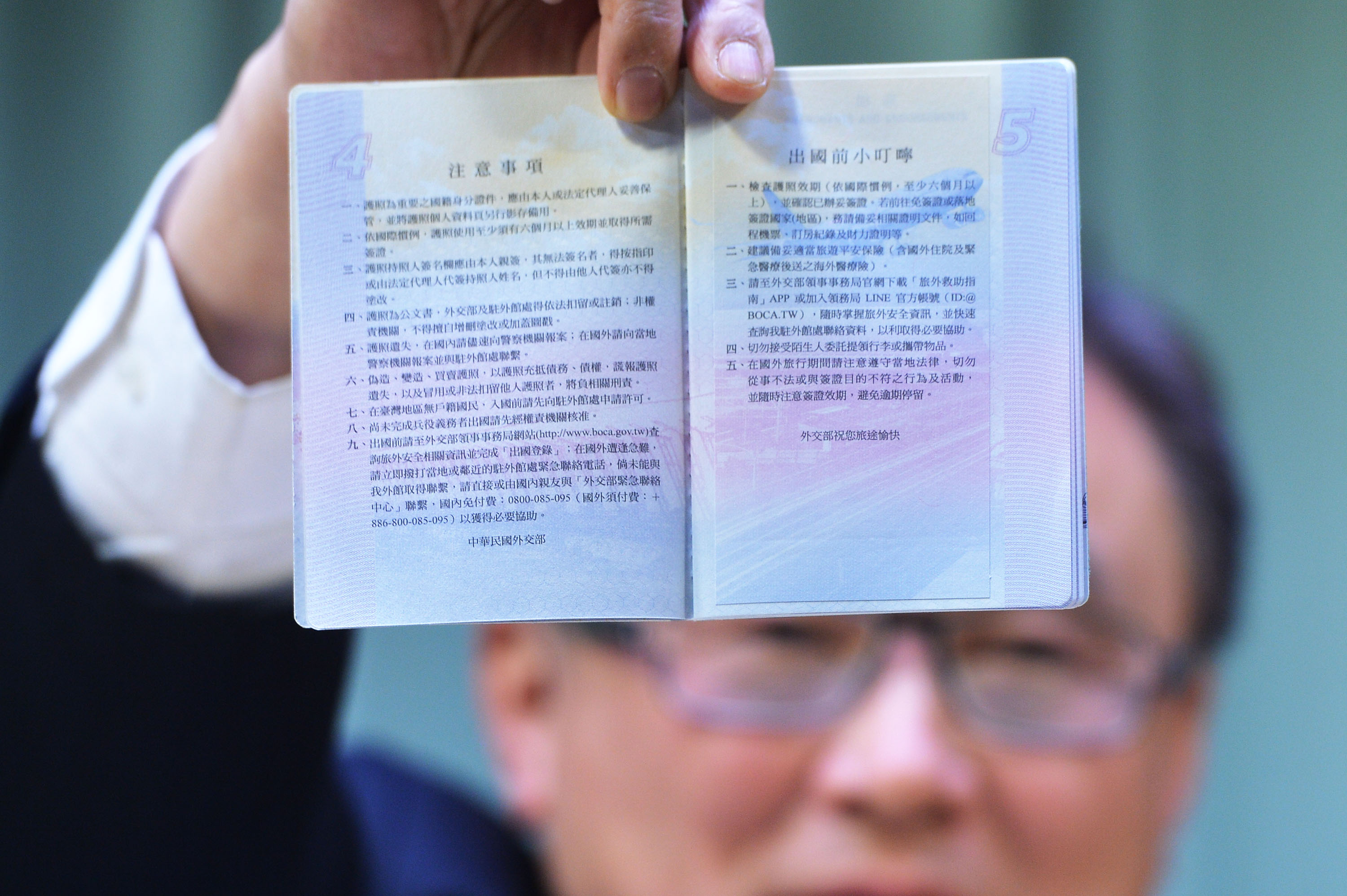 TAIPEI (Taiwan News) — The Ministry of Foreign Affairs (MOFA) revealed the sticker that is meant to cover the misprinted page of its newly designed Taiwan e-passport at a news conference on Wednesday and emphasized that the sticker would not compromise the integrity and functions of the passport.

Instead of replacing the 550,000 copies of the misprinted e-passports, which would have cost taxpayers an estimated NT$220 million, MOFA decided to cover the erroneous part of the passport with a sticker.

The sticker, shown at the news conference, is printed with Taiwan Taoyuan International Airport and a departing airplane, with a travel notice from MOFA.

Christine Tsai (蔡幼文), deputy director-general at BOCA, said the e-passports attached with stickers were scheduled to be issued in February.

Wang Bei-ping (王北平), head of BOCA’s Passport Administration Division, added that 100,000 copies of passports attached with stickers had undergone a final check on Tuesday, with 120,000 more due next Tuesday.

Tsai said the cost of the makeup procedure would be shared by the bureau and the Central Engraving and Printing Plant (CEPP), with the bureau covering the the cost of attaching stickers on 220,000 copies of passports and the CEPP handling the rest.

Hence, the bureau will spend NT$6.6 million on the stickers since a sticker costs NT$30.

Tsai emphasized that the stickers were authorized and issued by the bureau, so they would not compromise the integrity of the e-passports, but passport holders must not try to remove the stickers.

In addition, Tsai said the bureau would give a sample to authorities of overseas governments and airports so that passport holders needed not be worried about being held up at a foreign airport.

After the debacle, two high-level officers have been demoted from their original post, including Agnes Chen (陳華玉), director-general at BOCA, and her predecessor and Taiwan representative to Canada, Kung Chung-chen (龔中誠).

The bureau said on Wednesday that the second wave of disciplinary measures would include the current and former deputy director-generals at BOCA as well as other officials handling the design and issuance of the e-passport.

According to the bureau, a total number of 296 e-passports had been issued, and most of the passport holders had agreed to return the passport for the makeup procedure.

However, the bureau had not successfully contacted about 30 passport holders, said Tsai, adding that a written notice might be issued to them.