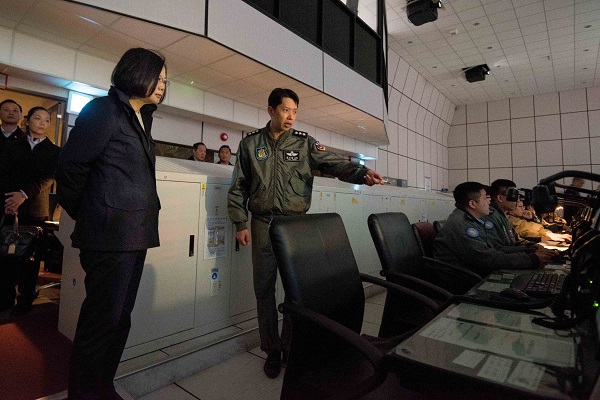 TAIPEI (Taiwan News) – Taiwan President Tsai Ing-wen (蔡英文) said in an interview on Monday evening that the government never ruled out the possibility of a Chinese invasion but emphasized one “should not underestimate the determination of the president” to maintain cross-strait peace and stability.

During her first television interview since taking office in May 2016, President Tsai talked about her cross-strait policy and the response to the growing pressure from China in the military aspect as well as many others.

“The government never ruled out the possibility of a Chinese invasion of Taiwan,” said the president plainly.

However, the increasing cross-strait tension was not just a problem between Taiwan and China but a problem of the region, and that any measure taken by the Chinese president to handle the matter would come with a cost that a rational leader should well take into consideration, added the president.

President Tsai told Cheng Hung-yi (鄭弘儀), the host of the television program, that her cross-strait policy had been clear, which was to maintain peace and stability.

“Do not underestimate the president’s determination,” Tsai said with regard to her efforts on the matter.

The president said as a leader of Taiwan, she needed to show persistence in the interests of the country, and that history could testify concession sometimes would not yield flexibility nor space.

Not directly mentioning the “one-China” principle and "1992 Consensus", two political mantras Beijing had insisted upon President Tsai to agree before starting any negotiation or talk, the president said the government would not accept political preconditions for the sake of having negotiations with the Chinese government.

In the face of the increasing military threat from China, the president said the public needed not be worried as the country’s military had taken it seriously and been monitoring every activity made by their Chinese counterpart.

In addition, President Tsai mentioned that the country had been amassing national defense capability even though it would not serve to replace arms purchases from the United States.

However, the most reliable way would be to develop the military facilities on our own, said President Tsai, adding “there was always some political nuance” in terms of the purchases.

During year-end remarks last December, the president said the country's defense spending under her administration would, on a reasonable scale, continue to increase every year.

Recently, Reuters also reported, based on two sources familiar with the issue, that the annual defense budget of Taiwan would likely reach NT$381.7 billion by 2025 - roughly a 20% increase compared to the present time.

In her last remark on cross-strait relations, President Tsai said Beijing’s continual pressure would only reinforce the unity of Taiwanese people, for whom democracy, freedom, and national security were emphasized.