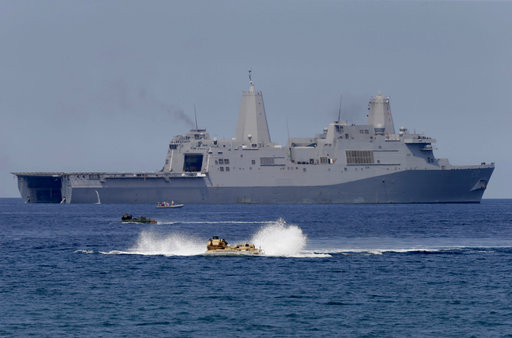 BEIJING (AP) — The Chinese government on Saturday accused the U.S. of trespassing in its territorial waters when a U.S. guided missile destroyer sailed near a disputed shoal in the South China Sea.

Scarborough is a tiny, uninhabited reef that China seized from the Philippines in 2012. Known in Chinese as Huangyan Island, it lies about 200 kilometers (120 miles) west of the main Philippine island of Luzon, and about 600 kilometers (370 miles) southeast of China.

Defense Ministry spokesman Wu Qian said a Chinese missile frigate moved to identify and verify the U.S. vessel and warned it to leave the area.

"We hope that the U.S. respects China's sovereignty, respects the efforts by regional countries and do not make trouble out of nothing," Wu said in a statement on the ministry's website.

China claims virtually the entire South China Sea and has carried out extensive land reclamation work on many of the islands and reefs it claims, equipping some with air strips and military installations.

The United States does not claim territory in the South China Sea but has declared it has a national interest in ensuring that the territorial disputes there are resolved peacefully in accordance with international law.

The Navy regularly sails through the area to assert freedom of navigation.

"The United States conducts routine and regular FONOPs, as we have done in the past and will continue to do so in the future," Lt. Cmdr. Nicole Schwegman, a spokeswoman for the U.S. Navy's Pacific Fleet, said after China's claim. FONOP is the military's term for freedom of navigation operations.

She said such operations are "not about any one country, nor are they about making political statements." Instead they aim to "demonstrate our commitment to uphold the rights, freedoms and lawful uses of the sea and airspace guaranteed to all nations under international law."