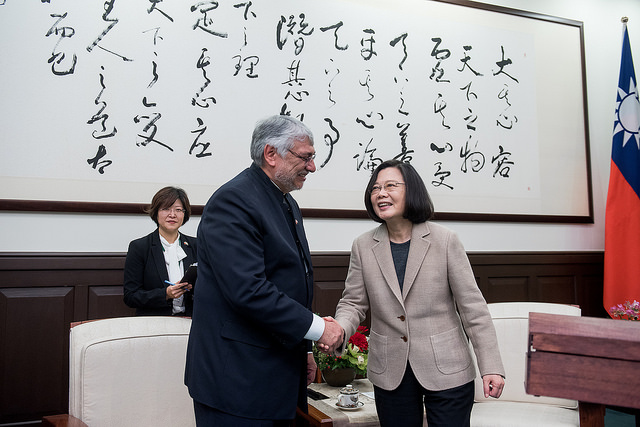 TAIPEI (Taiwan News) — President Tsai Ing-wen (蔡英文) received the Paraguayan delegation on Monday at the Office of the President. During the meeting she said the country would increase the quota for beef imported from the South American ally this year.

In her address, President Tsai noted the delegation, led by the country’s Parliament Speaker Fernando Armindo Lugo Méndez, was the first ally visiting Taiwan in 2018, which symbolized the close ties between the two countries.

Speaking of the bilateral relations, President Tsai said the quota for Paraguay’s beef sales to Taiwan had reached 10,000 tons per year, and that the government intended to further increase the number this year.

As of now, it is not known exactly how much the quota will be raised.

In addition, President Tsai said the Taiwan-Paraguay Economic Cooperation Agreement, signed between the two countries in July 2017, would be ratified in February, and the country looked forward to having a closer trade partnership with Paraguay.

According to Taiwan’s Bureau of Foreign Trade, the agreement is meant to streamline and facilitate cooperation between the two countries in economy, trade, technology, and investment, and to serve as a pathfinder for a Free Trade Agreement.

The bureau’s information shows that the agreement also includes tax reduction in goods circulating between the two countries.

Apart from the agreement, President Tsai mentioned that 28 Paraguayan students came to Taiwan with scholarships provided by the Taiwanese government in 2017, and that the number would be increased to at least 40 this year.

Taiwan established diplomatic ties with the South American country in 1957. President Tsai visited Paraguay during a tour to Latin America shortly after she took office in 2016.

The Ministry of Foreign Affairs (MOFA) said earlier that seven Paraguayan delegates would be visiting Taiwan from January 6 to 10, during which they would meet Tsai Chi-Chang (蔡其昌), deputy speaker of the Legislative Yuan, David Lee (李大維) and José Liu (劉德立), minister and vice minister of MOFA, respectively.

MOFA said the Paraguayan delegation was also scheduled to visit Asia's New Bay Area in Kaohsiung, the Fo Guang Shan Buddha Memorial, and the National Center for Traditional Arts, among other sites.