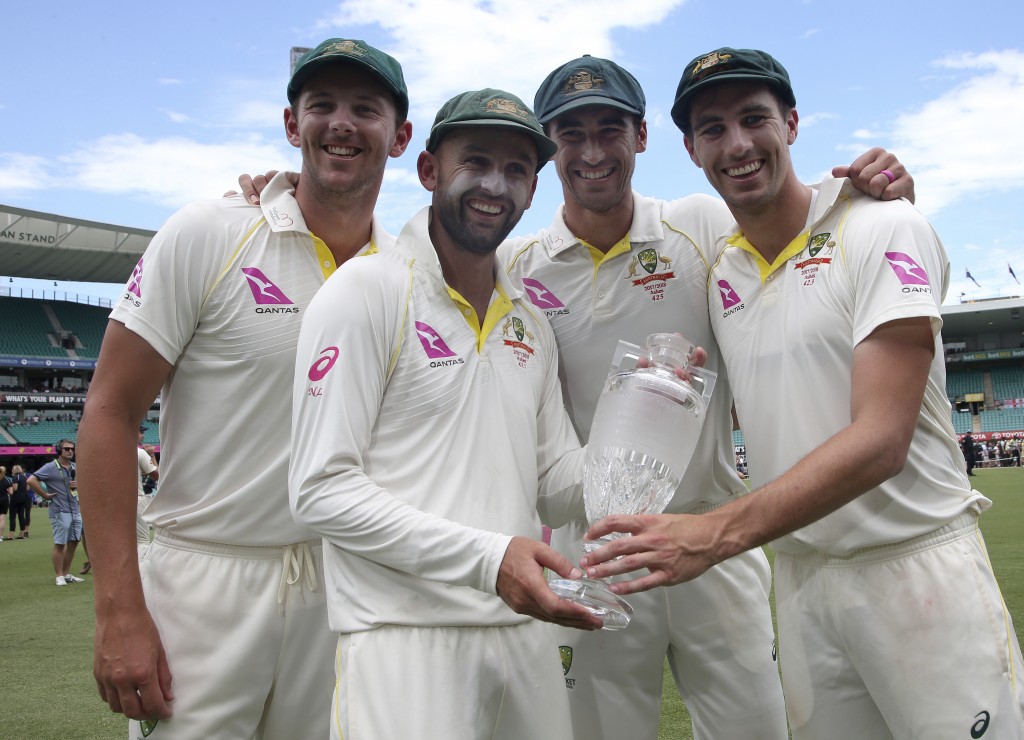 SYDNEY (AP) — Steve Smith might have got most of the plaudits after scoring a mountain of runs but the triumphant Australia captain said it was his team's outstanding quartet of bowlers that really laid the foundations for the 4-0 Ashes series win over England.

Each of Australia's four frontline bowlers took more than 20 wickets in the five-match series with Pat Cummins leading the way with 23 dismissals, followed by Mitchell Starc (22), Josh Hazlewood (21) and Nathan Lyon (21). Together they accounted for 87 of the 90 wickets Australia took in the series, with the other three all run outs.

"I think all the bowlers did an exceptional job, said Smith, who was named man of the series after scoring 687 runs at an average of 137.40.

"Each of our bowlers have over 20 wickets which showed that the guys have bowled together as a group, bowled in partnerships, bowled for one another and helped us take the 80 wickets that we've needed to take four Test matches."

Cummins was named man of the match in the fifth and final test, which Australia won by an innings and 123 runs on Monday, after taking eight wickets in the game but Smith singled out off-spinner Lyon as one of the key differences between the two teams over the whole series.

"Nathan Lyon got a lot of rewards throughout the series and bowled exceptionally well," said Smith, who celebrated his first Ashes series win as the captain.

"The way he's bowled and the consistency he's had has been outstanding.

"For me, the moment that changed the whole series was Nathan Lyon and his run out at the Gabba, that was such a huge moment in the series and those sorts of plays can change a series and I think that was a series-changing moment."

Lyon was the world's leading wicket taker in 2017, finishing the year with 63 dismissals. He now has 290 career wickets but says it's the combined strength of Australia's bowlers that makes it such a strong unit.

"In my eyes, it's the best bowling attack in the world," Lyon said. "As a squad, I think we've got all the bases covered well and truly."

"Obviously the batters got the runs on the board, but you look at this bowling squad — to be able to go out and take all the wickets as a bowling group and not rely on one bowler — it's special."