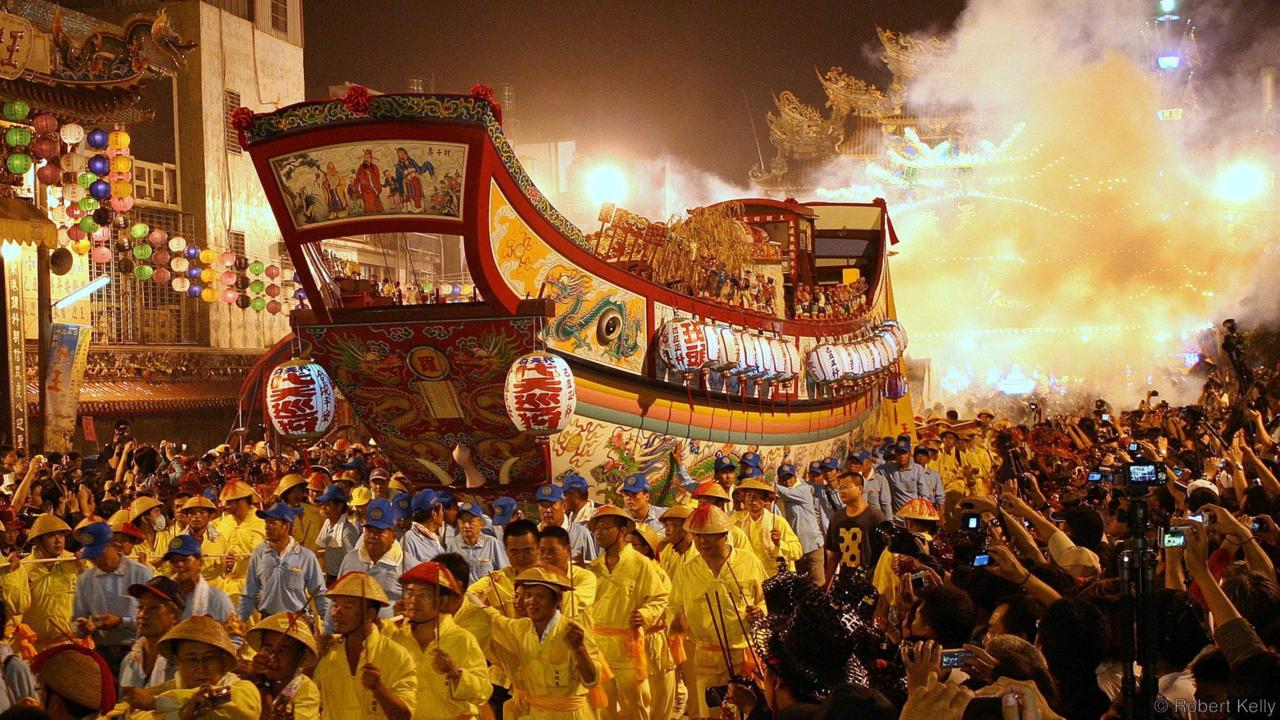 The fireworks have finished, the hangovers have subsided, and 2018 is properly upon us at last. But as day-to-day life returns to normal for a few weeks until the Chinese New Year celebrations arrive, it is easy to slip back into the old routine and quickly lose sight of the hopes and dreams we were all harboring as the clock ticked towards midnight on Sunday evening.

But it does not have to be that way. 2018 is a new year packed full of opportunity and excitement. And that is as true in Taiwan as everywhere else in the world. In fact, there are plenty of exciting things happening in Taiwan in 2018 which you can enjoy and really make this a year to remember. Here is a rundown of some of my standout events, just to whet your appetite. Happy New Year everyone! The Wang Yeh Boat Burning Festival takes place every three years in Donggang (東港) and October 2018 will see this spectacular religious ceremony taking place again. The festivities revolve around Donglong Temple (東隆宮) in Donggang where a ceremonial wooden ship will already have been prepared.

On the first day of the festival, this ship will be carried down to the beach to invite the gods to Earth. For the next six days, volunteers will carry the ship around the city to allow these gods to absorb bad spirits, diseases, and misfortune. On the final day of the festival, the ship is set alight at midnight on a bed of ghost money. Traditional states that as soon as the ship is on fire, everyone should leave the beach. But these days most people stick around to watch this stunning spectacle unfold. There is no shortage of people who will have set themselves fitness goals for the new year. And if you are serious about it, why not motivate yourself by targeting a marathon as your end goal. Marathon running is very popular in Taiwan and there are no shortage of events to choose from, but three events really stand out.

The Taroko Gorge Marathon (太魯閣馬拉松) sees runners competing in the beautiful surrounding of Taiwan’s most spectacular national park. Runners are drawn from across the world to take part in the full or half marathon events and take advantage of one of the few occasions when the roads around Taroko are not snarled up with traffic.

The other notable events include the Alishan Marathon (阿里山路跑)which is billed as a chance to run in the clouds and the Tianzhong Marathon (田中路跑)where the residents of Changhua township demonstrate their hospitality by offering out many different local delicacies to runners as they compete. It’s an opportunity to start piling on the pounds again while still running your marathon. And the rural scenery is pretty impressive too. Western music acts visit Taiwan far too infrequently, so when they do make the effort it is important to support them to persuade others to follow their lead. In the case of Katy Perry, who is playing the Taipei Arena on April 4, this is especially important as she was recently refused entry to China for holding up a Taiwan flag at a previous gig here. Brunu Mars is also in Taipei at the Nangang Hall on April 17.

If pop music is not really your thing, then you could check out The xx, who are playing at NTU Sports Center on Feb. 5, or The Script, who are at the same venue on April 26. Or there are some great musical theater offerings too, with Evita playing for much of April at the National Theater and Cats at the NTU Sports Center in March. If you are heading into Lantern Festival and still looking to get 2018 going with a bang, then there is nowhere better for you to head than the Yanshui Beehive Fireworks Festival. Alongside Taitung's Bombarding Lord Handan (炸寒單) it is probably the most famous annual Taiwanese festival and certainly something you will remember until your final breath.

Participants follow the procession of the deity around the town wearing full-face helmets, towels to protect their necks, and old clothes. Fireworks are then thrown at them and it is said that the more you are hit by, the less bad luck you will have in the following year. The procession is the centrepiece, but the whole town is filled with noise and activity, with firecrackers going off everywhere, music playing throughout the town, and hundreds of thousands of people arriving to take part. It is a unique experience, but not, of course, without some risks too. Watching professional sport in Taiwan can be an underwhelming experience. Baseball and Basketball may be the most popular sports, but domestic league matches are frequently underattended and underwhelming. But there is something special happening right now in Taiwanese football. The appointment of Englishman Gary White as Head Coach of the team has given a renewed sense of purpose to team more used to keeping the goals against tally down than winning games.

White has won five of the six games he has managed so far and instilled a winning mentality in his players. Anyone who attended the thrilling 2-1 win over Bahrain at the Taipei Municipal Stadium in October, when two goals in stoppage time saw them snatch victory from the jaws of defeat, will attest to the entertainment value of the team these days. A narrow 2-1 defeat in Turkmenistan in November may mean Asian Cup qualification is now out of reach, but the home game against Singapore on Mar. 27 still promises to be a great occasion and with other fixtures through the year, it is a great time to start cheering the team on. Sun Moon Lake (日月潭) is one of Taiwan’s most popular tourist attractions thanks to its stunning scenery, cool mountain climate, and fascinating history. Finding a new way to see and experience it can be tough, but one unique approach is to take part in the Sun Moon Lake Swimming Carnival.

This annual swimming competition is celebrating its 35th anniversary this year and during mid-Autumn festival, thousands of swimmers from around Taiwan and beyond will come together at Zhaowu Wharf to swim the 3,000 m course. If you are aged over 10, healthy, and able to swim the distance, you can participate and take in the amazing atmosphere and stunning surrounds of Taiwan’s best outdoor swimming event. With the New Year’s Eve festivities still ringing in our ears, you may not feel the need to seek out another firework display just yet. But the Penghu Ocean Fireworks Festival is one event really worth making an effort for. It takes place at the height of summer with shows held on Mondays and Tuesday.

The focal point is the Xiying Rainbow Bridge near the Guanyin Pavilion. This bridge is usually lit up rather impressively in rainbow lights, but during the festival it is location of spectacular fireworks display that is reflected in the ocean below to spectacular effect. A journey to Penghu is a worthwhile venture at any time of year, but the firework festival is worth the journey on its own!