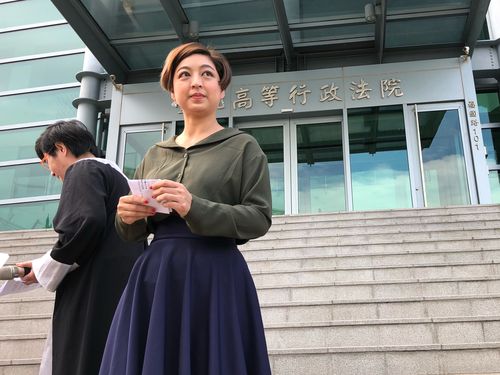 The Taipei Administrative Court received an application from the lesbian couple, Jennifer Lu (呂欣潔) and Chen Ling (陳凌), who were earlier rejected by the Zhongzheng District office. They had applied to overturn the household registration office’s decision refusing to register them as a married couple.

However, the Taipei court rejected the application citing the fact that same-sex couples cannot be registered as married until the relevant laws are passed, which is set to happen within the next 16 months according to the ruling by the Constitutional Court in May last year.

According to the court's ruling, until the relevant amendments are completed and same-sex marriage laws are cleared by the legislature, local authorities have no right to legally approve the registration application made by the couple.

Lu and Chen are among the 30 lesbian couple who applied with household registration offices in August 2014 to obtain legal recognition as married couples. However all of the applications were rejected since the laws pertaining to same-sex marriage are still under scrutiny and awaiting amendments to be approved by the legislature.

After the incident, the Taiwan Alliance to Civil Partnership Rights, who helped the couple file for the applications said in a statement that even though the application has been rejected and it regrets the decision of the court, it will not back down and will keep trying until marriage equality is recognized.